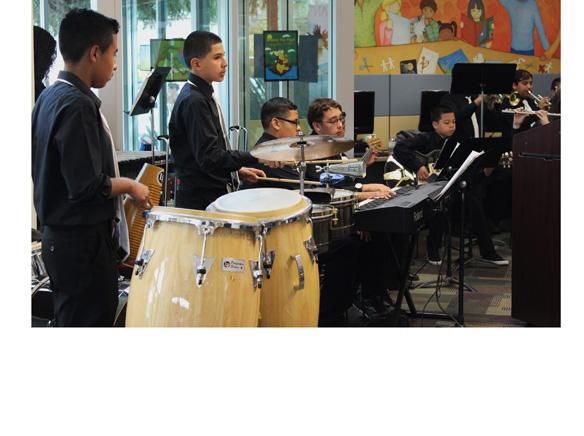 Library voices were heard, not hushed, at the 2nd annual Spring Valley Karamu, a spirited celebration in honor of Black History Month presented by the Spring Valley Branch Library on Feb. 21.

Library voices were heard, not hushed, at the 2nd annual Spring Valley Karamu, a spirited celebration in honor of Black History Month presented by the Spring Valley Branch Library on Feb. 21.

Karamu—which means “a feast” in Swahili—took place inside and around the branch library on Saturday. Entertainment included music by a live DJ, guitarist/vocalist Lisa Sanders and La Presa Middle School Jazz Band, slam-poetry recitals by Nate Howard, Terrance Carter and Sarah Tompkins, and storytelling by members of the Black Storytellers of San Diego.

There was, of course, plenty of food, too. Creole pasta, Caribbean rice and garlic bread was served hot, tasty and free of charge.

Jennifer Teitelbaum, a librarian at the Spring Valley Branch Library, said she was pleased by the turnout, which she estimated to be at least “a few hundred.”

“It’s such a blessing to work with them,” he said. “They’re so dedicated. They get together three days a week, an hour before school.”

The band’s last song, a brilliant rendition of John Coltrane’s “Mr. P.C.,” proved that their dedication pays off. It was an incredible display of unity for a band of their size—more than 20 members in all. It was their second time performing the song live, Irwin said, and every song they performed paid tribute to the roots of jazz music.

“Jazz music was born here, in Louisiana and New Orleans, and has developed to what we hear today,” he said. Jazz music originally accrued influences from various parts of the world, and “the music you heard today was influenced from music as far as South America, all the way to Africa.”

“Everybody can learn important things from Black History Month,” she said, “like how to be courageous, how to go against the grain and how to create change in society, and put into action the potential that America has.”

Carter and Baredu Morka, also a co-founder of Grossmont College’s Student Empowerment Organization, introduced Sarah Tompkins to the audience during the slam-poetry recital portion of the event.

Tompkins rendered elegant, uplifting poems that touched on themes such as multiculturalism, racism and parenthood. Her last poem ended with an a cappella. Her presence contrasted the other poets, Nate Howard and Terrance Carter, whose novel, outspoken and rhythmic poems had many audience members on the edge of their seats.

In one poem titled “Type of Stereo,” Howard delineated several negative stereotypes that exist in the world today.

He continued, “Dreads and braids, I must have AIDS, dying early in my grave because I was shot 10 times disputing with the bloods and crypts gangs.”

A warm round of applause followed each poem, song and story at Karamu.

There was no shortage of smiles or laughs at the event, which ended around 4 p.m.

Teitelbaum said Karamu is the second largest event the Spring Valley Branch Library hosts, next only to Fiesta, an annual event in September that celebrates Hispanic Heritage Month.

Teitelbaum said she has recently been listening to “All Night Long” by Lionel Richie, so she could get pumped up for the event.

“We’re going to party,” she sang. “Karamu, fiesta, forever. Come on and sing along, all night long!”

The Spring Valley Branch Library has plans for a 3rd annual Karamu next year, she said, “You better believe it.”

We are not our GPA scores

Our judges need to be tougher on sexual predators