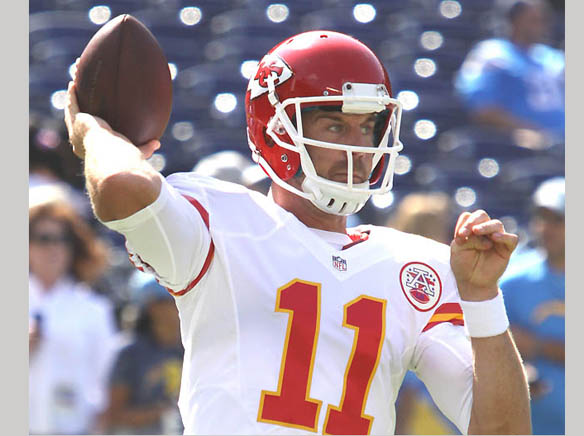 The win kept Kansas City (8-3) within one game of the division-leading Oakland Raiders (9-2) and promoted the Chiefs to the No. 1 wild card slot among AFC teams. Denver fell to 7-4 in the AFC West standings.

The win kept Kansas City (8-3) within one game of the division-leading Oakland Raiders (9-2) and promoted the Chiefs to the No. 1 wild card slot among AFC teams. Denver fell to 7-4 in the AFC West standings.

The win put Smith, the NFL’s No. 1 draft pick in 2005, back into the national spotlight.

Many network television analysts have relegated Smith to the role of “game manager”. But after the former Highlander standout led his team to the game-tying touchdown and two-point conversion to send the game into overtime, then led his team to game-tying and game-winning field goals in overtime, NBC-TV play-by-play announcer Mike Tiricio corrected himself and said Smith was no longer just a “game manager” but a “game winner.”

“We feel fortunate,” Smith said in a post-game interview. “We took advantages of the opportunities that were presented to us.”

Smith and the Chiefs entered Sunday night’s primetime game coming off a disappointing 19-17 home field loss to the Tampa Bay Buccaneers the previous week. In that game, Smith threw for 261 yards, scored one rushing touchdown, passed for one touchdown and one interception in the end zone.

But the Chiefs had to fight an up hill battle from there against a punishing Denver defense.

The Broncos took a 10-9 lead on a 33-yard field goal by Brandon McManus and six-yard touchdown pass from Siemian to Jordan Taylor.

The Chiefs responded with a three-yard touchdown run by Hill only to have Siemian connect with Emmanuel Sanders on a 35-yard touchdown pass to put the hosts back on top 17-16.

Denver took a late 24-16 lead when Siemian hooked up with Bennie Fowler on a 76-yard TD completion.

The finish was among the most exciting this season on the “Sunday Night Football” broadcast.

Down by eight points with three minutes remaining in the fourth quarter, Smith stitched together a 13-play, 75-yard scoring drive to pull his team to within two points on the scoreboard.

Smith threw a clutch 10-yard pass to Hill on fourth down to extend the Kansas City drive. Smith then threw a three-yard scoring pass to Hill that required a video review to confirm the touchdown. Initially, the ball was placed at the one-yard line with one second to play. However, a video review showed that as Hill’s leg came down he completed the catch in the end zone.

The officials reversed their call on the field and the Chiefs were granted the touchdown to narrow the score to 24-22 with 12 seconds to play. Smith then completed the eight-point rally by taking the snap and running to his right before tossing the two-point pass to Demetrius Harris.

Tied 24-24, Denver received the ball first in overtime and marched down the field to take the lead on a 44-yard field goal by McManus. Down 27-24, Smith then marched the Chiefs the other way to secure a 37-yard field goal by Cairo Santos to extend the game.

The Broncos received the kick-off and reached midfield before facing a crucial fourth-down decision. Denver coach Gary Kubiak elected to attempt a 62-yard field goal. However, the try by McManus was wide left, giving Smith and the Chiefs the ball at their opponent’s 48-yard line with 1:03 to play in the 15-minute overtime period.

Smith promptly made two completions to get his team into field goal range.

The outcome of the game came down to the last play. If Santos made the field goal attempt, the Chiefs would win; if Santos missed, the game would end in a tie.

Santos hit the ball and it began veering to the left. The ball hit the upright and bounded to the right. Instead of falling back to the field, the ball traveled behind the right upright to complete the field goal.

The game-winning kick simply added more drama to the ending of the game.

“In a division like this that is so competitive, for us to get the win was sweet,” Smith said.

Smith completed 26 of 44 attempts for 220 yards and one touchdown, and has

Siemien completed 20 of 34 attempts for 368 yards and two touchdowns in Sunday’s loss.

Justin Houston led the Chiefs defense with 10 tackles,  three sacks and one forced fumble. Von Miller, the MVP of Super Bowl 50, paced the Broncos with nine tackles and three sacks.

Travis Kelce had eight receptions for 101 yards for the Chiefs. In an unusual touchdown trifecta, Hill caught a touchdown pass, scored a rushing touchdown and ran back a free kick 86 yards for a touchdown.

The old American Football League rivals rematch Christmas night in Kansas City in what looms like a critical contest for both teams.

The Raiders held onto first place in the AFC West by out-dueling quarterback Cam Newton and the Super Bowl runner-up Carolina Panthers, 35-32, on a 23-yard field goal by Sebastian Janikowski with 1:45 to play in regulation.

The Chargers improved to 5-6 on the season and, though they may have little chance of winning the AFC West title, they could very well determine who wins the division with home games remaining against Oakland (Dec. 18) and Kansas City (Jan. 1).

Seven teams sit ahead of the Chargers in the wild-card race. A lot would have to happen for the Chargers to make the playoffs, though the Bolts still remain mathematically in the playoff hunt.

Miami has won its last six games while Oakland has won five in a row.

The four division winners, plus two wild-card teams qualify for the NFL playoffs in each conference.

Dallas and Detroit both won their traditional Thanksgiving Day games in front of national television audiences. Dallas, braced by the sensational rookie duo of quarterback Dak Prescott and running back Ezekiel Elliott, has the best record in the NFL.