La Mesa made national headlines about a year ago when a peaceful Black Lives Matter-affiliated protest turned violent and destructive. Over the night of May 30, 2020, several buildings were burned to the ground, multiple people were injured, storefronts were shattered and small businesses were looted.

Organized after La Mesa Police Officer Matthew Dages roughly arrested a Black man, Amaurie Johnson for allegedly smoking near the Grossmont Trolley station, the local event mirrored nationwide protests surrounding the murder of George Floyd, a Black man who died at the hands of a white police officer in Minneapolis.

La Mesa Village has long since been cleaned up and many shops have shiny, new glass in their windows but the chain link fence surrounding where Chase Bank, Union Bank and the historic Randall Lamb building stood are an ongoing reminder that whole buildings were struck from the village skyline that night.

“It was emotional to drive down Spring Street and see charred, smoking buildings still smoldering. There was this hulking, metal, maimed, charred, ugliness we only see in movies,” Chamber of Commerce President Mary England said.

City Council Member Bill Baber said the city woke up on May 31, 2020 and suddenly “realized we’re not immune from the forces and pressures of national events” despite being a small town.

“Having that local incident right in the middle of a national  moment, with George Floyd-related protests happening all over America— we were a small town thrust into a big city crisis we weren’t prepared for,” Baber said.

Dan Buxton, who owns the La Mesa Play It Again Sports franchise, a shop that was heavily publicized for the dubious honor of being one of the most looted stores during the protest, said “people still question: ‘La Mesa? Really?’ even a year later” because it was so unexpected.

However, he also said the next day changed everything when the community showed up to help with recovery.

“The day afterward, there were hundreds of volunteers who showed up and didn’t ask for anything. I could hardly get into the store because there were so many people who had shown up to help,” Buxton said.

At first, he said, it was devastating, but it turned out to be sort of a blessing in disguise.

“We hadn’t even been open a year yet and afterward everyone tried to support us and it made us visible in the eyes of the community. I’ll always want to let the community and residents know how grateful I was for them helping us get back on our feet,” Buxton said. 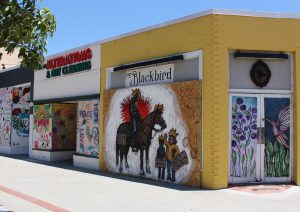 Ultimately, he hopes the event “opened people’s eyes to some of the injustices and made people more open” to recognizing different points of view.

Baber said people have asked him what the local government has done to change policing practices since then. While he believes the after-incident police report constructed by outside security risk management firm Hillard Heintze is too passive, that ‘humans did things’ is a soft-soaked approach to identifying areas that need change, he also believes the report exposed a “systematic flaw” in the local government.

“The city council has no control over the police chief; we can’t even hire or fire them— that is done by the city manager. So, you have a city council and a mayor that people expect to be in charge but the law doesn’t put us in charge,” Baber said.

Tracing back problems to identify solutions requires accepting that everyone made mistakes along the way.

“Everybody had a hand in that evening,” he said and like a soccer game lost 8-0, you cannot blame the goalie when clearly every player on the team contributed to the loss.

“We had buildings burned down, properties looted but then we had this massive outpouring of volunteers, people who wanted to help, people who started painting art to reflect the beauty of free speech,” Baber said.

As sad and distraught as he was on May 30, Baber said, May 31 brought joy, brought hope and optimism.

“May 31 was a glorious day because of its contrast to the day before, it was symbolic of people working together,” Baber said.

Resident Ursula Koenig, who spearheads community improvement group Envision La Mesa said the makeshift plywood tacked down over broken storefronts in the days following the protest reassured her that the community could do damage control.

“I live next door to angels and superheroes who have paint brushes instead of wings and capes. They showed up with smoke still in the air and they just did it, they turned destruction into beauty,” Koenig said.

The plywood boards, which were painted with quotes, artwork, and catchphrases that captured the essence of the protest movement which continued through summer of 2020 as well as localized La Mesa’s unexpected involvement in a national conversation on race that dominated the news cycle have since come down and been stored for eventual display.

They continue to spark discussion, Koenig said, including a conversation she had with a resident who said they refuse to support a local business owner whose politics differ from their own.

“It is so important not to lose the messaging, that it’s okay to be a grown up, own a home, like the police and still want them to do better,” Koenig said.

The best outcome she has seen, she said, is increasingly recognizing how many people are now getting involved in local politics.

“That’s a big deal. A committee being formed, people bringing their kids into the conversation, people sharing social media posts saying ‘I’m going to the next council meeting’ who never posted things like that before. There’s almost a higher quality to deciding what to spend time on, what action to take,” Koenig said.

As Baber said, he is sure people lost some faith in the civil authorities of La Mesa but there are also many who woke up on May 31 and decided to pick themselves up, rethink the situation and rebuild.

“I think that night humbled everyone on the city council and reminded us that the social fabric is fragile and we need to do everything possible to keep it together,” Baber said.