San Diego State University’s football team is headed to the Hawaii Bowl on Dec. 24. The Aztecs will be traveling with the recently named Mountain West Conference Special Teams Player of the Year after West Hills High School and Grossmont College alumnus Jack Browning was accorded honors following the conclusion of regular season play.

SDSU carries a 7-5 record into the upcoming bowl game against Middle Tennessee (7-5). Browning’s numbers have added up to nothing short of excellence.

Handling all three kicking duties, Browning has made 17 of his 21 field goal attempts and all 28 point-after-touchdown conversions to lead the Aztecs with 79 points — more than the next three players combined.

An Aztec has won the special teams’ player of the year award five times (all over the last eight years), the most in the 24-year history of MW.

For a fourth consecutive year, SDSU had the most first-team all-MW selections with seven, three more than Fresno State and San Jose State’s four. The Aztecs also had the most combined first and second teamers (11) and the most all-conference selections overall (16). The 16 all-league selections for the Aztecs tied a program best (also 2001).

Matthews had 38 catches for 409 yards and three touchdowns to rank second on the team in receiving yards and tied for first (with Tyrell Shavers and Mekhi Shaw) for most touchdowns.

The all-conference awards are voted on by the league’s 12 head coaches and various media members from the league. 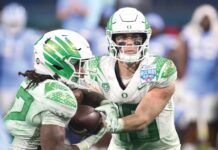