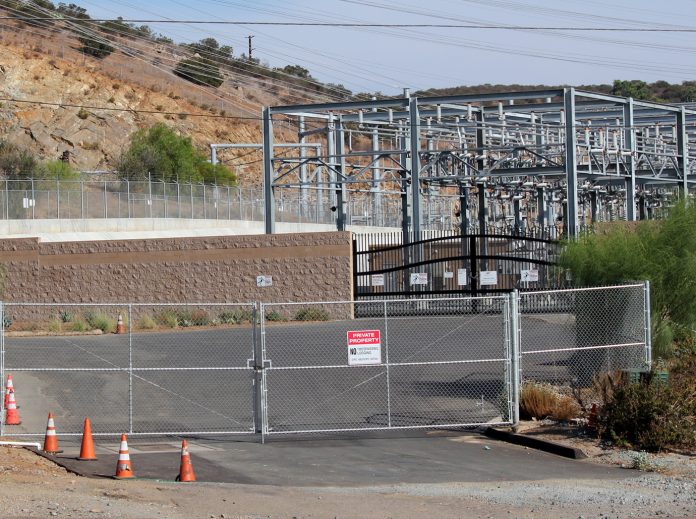 A letter announcing that SDG&E planned seven power outages during the months of August and September sent customers over the edge in the Alpine areas scheduled to have their electricity cut off starting on Aug. 2, 2018. The neighborhood currently affected is the Careveacre Ranch Estates, off Japatul Road. The planned outages project is part of the Cleveland National Forest Fire Risk Mitigation Initiative (FiRM) which has been in work for the past 10 years.

A letter announcing that SDG&E planned seven power outages during the months of August and September sent customers over the edge in the Alpine areas scheduled to have their electricity cut off starting on Aug. 2, 2018. The neighborhood currently affected is the Careveacre Ranch Estates, off Japatul Road. The planned outages project is part of the Cleveland National Forest Fire Risk Mitigation Initiative (FiRM) which has been in work for the past 10 years.

The goal of this project is to ensure “safety and reliability by replacing existing electric infrastructure (…), emergency service facilities, campgrounds, homes, businesses and other customers within the CNF and surrounding areas,” as stated on the company’s website.

More than 100 customers will be affected by the outages, which can last up to nine hours a day, as mentioned in the SDG&E letter.

Bill Smith, an affected resident, complained SDG&E has been “cutting power off at least once a month for the past three months and that it is hard to survive over three digits temperatures without water, AC and without the electricity needed to maintain medical devices and charge phones for emergencies.

“Not everyone can afford a generator and people who have solar panels lose the credit for the entire day,” he said. “We all have wells here and can’t run the water without power.”

Smith has 19-month-old twins and said it is difficult to keep them in the house or put them to sleep during 100 degrees temperatures “even with the windows open.”

Smith said nobody has issues with the much-needed power lines upgrades, only with the timing.

“The problem is that they are doing it in the summer in extreme heat when people cannot run the AC or have access to water.”

Jerry Peel, also a resident of the area, said preparation is mandatory for such circumstances.

“Living in the back country, you need to be prepared for anything if power is a concern,” he said. “It’s simple, people need to learn how to take care of themselves and not be dependent on the grid. Buy a generator.”

Linda Ascione Niman has a house up the hill in Carveacre neighborhood.

“The absolute worst power outages are when SDG&E deliberately turns off our power during dangerous Santa Ana conditions,” she said. “This is very frightening because we feel totally defenseless. They are not protecting us from fires by doing this, they are only protecting themselves from being liable if their wire starts a fire.” Niman said her family is cut off from everything when the power goes off, which is both disconcerting and potentially dangerous because cell phones do not get signal at her house.

“We can’t keep track of what’s going on,” she said. “If there is a threatening fire, we might not know about it.”

Niman does not have a generator and is without water during power outages.

Allison Torres, Communication Manager with SDG&E, said the company is replacing wooden poles with steel poles and also upgrading and strengthening the power lines in an effort “to make them fire and wind resistant.”

Torres said the timing of the renovation was simple.

“The reason why we prioritize this project to this time frame is because we are about to enter what has previously been the traditional fire season, but now as you know we are dealing with fire season all year around,” she said.

Torres said SDG&E takes the weather conditions into consideration and “we are actively monitoring all outages even after we schedule them.”

SDG&E decided to cancel the outage scheduled on Aug. 2 due to extreme heat, which pushes the date for completion toward the end of September. Torres advised customers to contact SDG&E at the number provided on the letter (1-858-654-1133) and consult with the Planned Outage Manager about any issues they may have, including installing a generator.

“There are a lot of safety protocols and precautions that should be taken with a generator and our customers need to call us before purchasing and installing one.”

The Cleveland National Forest Power Line Replacement Projects consist of a number of smaller projects aiming to replace “approximately 2,100 existing wood poles with fire-resistant, weatherized steel poles that closely resemble wood (…) throughout an approximately 880-square-mile area in eastern San Diego County,” as stated in the Master Special Use Permit (MSUP) for this project.

The Magnolia opens to give El Cajon’s performing arts a place...

East County Chamber of Commerce shines with an evening of honors...