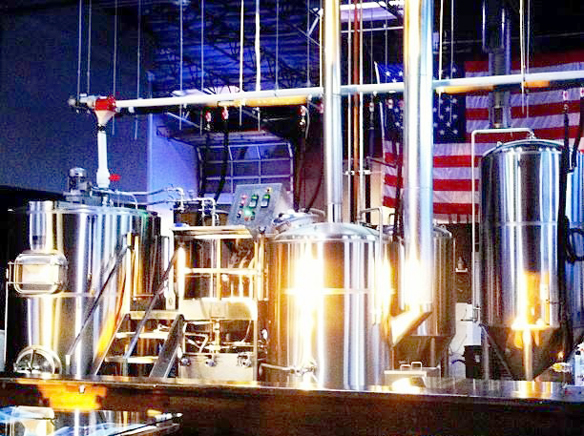 Everything about Santee’s newest brewery, BNS Brewing and Distilling, is big. The signage is big, the tasting room is big and the American flag hanging on the wall is really big.

But it is the little things that set it apart in San Diego, a city known nationally for its craft beer scene.

Like the small symbol embedded at the end of a long bar top—a Navy SEAL trident.

Everything about Santee’s newest brewery, BNS Brewing and Distilling, is big. The signage is big, the tasting room is big and the American flag hanging on the wall is really big.

But it is the little things that set it apart in San Diego, a city known nationally for its craft beer scene.

Like the small symbol embedded at the end of a long bar top—a Navy SEAL trident.

BNS’s (brews n’ spirits) crew make-up sounds like the beginning of a joke. Two former Navy SEALS and a fire captain walk into a bar…

Add a former Coronado Brewing Company brewer and a general contractor to the mix and BNS’s five-person team is ready to start making beers and something a little harder.

BNS, located on Wheatlands Avenue, will celebrate its grand opening June 29 from 12 p.m. to 10 p.m. Food trucks will be on site along with trophy trucks from Score, an off-road racing company. A ribbon cutting ceremony will take place at 5 p.m.

After President Wes Richey’s last deployment – he served for 9 years as a Navy SEAL – his wife bought him a home brew kit.

And it was on. A short three years later, Richey, and his team are set to open up a full-scale brewery, a tasting room, and a small batch distillery – a first in Santee and one of only two in the county.

“I did have blonde hair before we started,” he said.

BNS’s décor harkens back to the Wild West, with a lot of natural wood, coffee table books exploring the frontier and a tasteful touch of animal print. But it is the family friendly ambiance that is most notable – down to a dedicated nursery for new mothers, complete with a cradle.

The brewery’s outdoor space is also a plus and Richey promised regular visits from local food trucks.

Currently, the brewery hosts four flagship beers on tap. It has a healthy supply of merchandise including home-brew kits and tees.

But in San Diego, known nationally as a craft beer Mecca, new breweries are constantly popping up so it takes something special to stand out.

How about a distillery to shake things up?

“We see the future in it,” Richey said.

While many craft beers in San Diego seem to be getting hoppier and heavier, boasting high alcohol contents and bold aftertastes, BNS went a different route.

Head brewer Dan Jensen, formerly of Coronado Brewing Company, said all of BNS’s staples aim to be drinkable, above all. No flavor is too over the top and alcohol content is pretty low, even in the India Pale Ale.

Saloon Girl Saison is a crisp, fruity beer that ventures away from San Diego’s love of pale ales.

“It will help people transition from Coors Light and Bud Light to craft beer,” he said. “It’s trucker friendly.”

Revolver IPA is a classic, West Coast India Pale Ale with lots of hops – a grain put in beer that creates that smack your lips bitterness.

“A revolver holds six rounds so we put six different kinds of hops in it,” Jensen said.

A nice in between beer, Flintlock Pale Ale has more punch than the Gunfighter Gold but more balance than the Revolver.

New beers may come and go, Jensen said, but these four are the mainstays. With more than 20 taps ready to be filled, there is plenty of room for experimentation, he said.

Patrons may not have to travel to the tasting room for long to get their hands on Santee’s newest beers.

Cal Fire Capt. Tom Paden, who runs BNS’s distribution, said the brewery has already started introducing its beers to surrounding locations. Without making too many promises, he said East County residents would be seeing the brewery’s label on 12-ounce cans at local retailers sooner rather than later.

Cans you say? Richey said he’s looking out for the locals.

“A lot of folks out here go to the lake or the river or the dunes and you can’t have glass out there,” he said. “And no light ever touches beer in a can. Keeps it fresh.”

In whatever form customers choose to pick it up, be it in the tasting room or out at a favorite bar, Richey said the beer will speak for itself.

But there’s a lot to learn in a city that brewing giants like Stone call home.

“It’s like us going through training again – it’s very humbling,” he said. “We entered into a whole new world where we’re the new guys again, in the business world and the San Diego craft beer scene.”