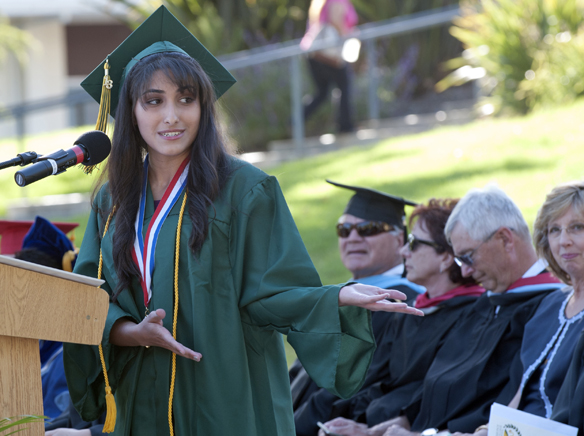 Laila Hamzai said she did not feel this way growing up, even as difficult as it was at times while attending school, but she believes many young people in similar circumstances do.

“They don’t shoot for the stars,” Hamzai said. “When you are a refugee, coming in from another country, you are like, ‘Okay. I am just happy to be here.’ But take it further and say, ‘I am happy to be here and there are all of these opportunities that I am going to try and get as much out of it as I can.’”

Laila Hamzai said she did not feel this way growing up, even as difficult as it was at times while attending school, but she believes many young people in similar circumstances do.

“They don’t shoot for the stars,” Hamzai said. “When you are a refugee, coming in from another country, you are like, ‘Okay. I am just happy to be here.’ But take it further and say, ‘I am happy to be here and there are all of these opportunities that I am going to try and get as much out of it as I can.’”

She was born in Iran. Her family, not  wanting to be Muslim, left Iran and went to Pakistan, where the U.S. Embassy took them in as refugees. They stayed there a couple of years, but it was not much better so they moved to the U.S., eventually with the help of friends, landing in El Cajon. She came to the U.S. at eight years old and had never been to school before and placed into second grade. She did not speak English and only knew her ABCs.

“At first I didn’t understand the concept of school,” said Hamzai. “My parents did their best to teach me and help me understand, but it was hard. My mom would try to teach me the basics, but it is no different from taking Spanish or French here. It is just the very basics. I could not carry on a conversation. It was towards the end of the year, so I just got through it. It was difficult and I hated it at first. But I love reading and that is where I began learning all of my language skills.”

But this first generation American, now 18, and living in Santee, graduated from Grossmont Middle College High School this year as valedictorian. Occidental College in Los Angeles to major in biology with an emphasis on pre-med is her next big step this fall.

Larry Barbary, Hamzai’s 8th grade teacher at Cajon Park Elementary said Hamzai was a remarkable child when he first met her at the age of 12.

“It is extremely brave for a sixth grader to come looking for an eighth grade teacher to make sure she was taking the right classes and on the right path,” said Barbary. “She is full of determination. She could have a 99 percent and she would still want clarification, not for the grade, but she really wanted to make sure she understood. We talk college ready all the time, but she came here talking about her future.”

Going to high school at Santana and involved in many activities and friends, she said the decision to go to Grossmont was not easy. But with the encouragement of a friend, she decided to apply. She said she was ready to try something new.

“Yes, I knew I would miss my friendships, but I also knew that this would be something that would shape my future, especially being able to take college classes,” she said.

Before starting Grossmont, she said she loved biology, but first studied administration of justice to go into law enforcement. But taking another biology class she fell in love with it all over again. Now with 37 college units, and her first year of college completed through Grossmont’s program, she is working towards becoming a pediatrician, but also has a love for research.

She interned at Yale Preschool and Project Safe, the Office of State Senator Joel Anderson, and Sharp Grossmont Hospital. Last summer she was selected to participate in Cosmos, a month-long, residential research program at UCSD, part of the Tissue Engineering and Regenerative Medicine research group. That summer, she also attended National Young Leaders’ Forum on Medicine at UCLA.

“These weren’t all internships, but they were amazing opportunities that helped me choose a career pathway,” she said.

Mike Gilson, associate pastor, Pathways Community Church, in Santee said a friend originally invited her to its youth group while she was a freshman and still attending Santana.

“Determination is one of the words that best describes the reason for Laila’s academic success and her position as valedictorian,” he said. “She had the opportunity for education and advancement, set the bar high, and continued to march faithfully toward her goal. She has worked hard and tirelessly to complete all of her tasks with excellence.”

Gilson said despite a late start, some significant hearing loss and the normal struggles of life as a teenager that she determined herself to succeed.

“And, she has done just that,” he said. “Being valedictorian is about more than just grades, and her determination, in many areas of her life, has shown itself very clearly.”

“She has gotten more serious about her relationship with Christ, baptized this spring and her faith has given her additional strength to draw on,” he said. “Humility is another key quality that has helped Laila set her course for life. She displays a quiet confidence that leads her to do well without boasting, and serve others instead of just herself. I’m sure this has influenced her decision to study and practice medicine.”

Barbary said Hamzai has always been a pleasure to work with and she still comes by her old school often.

“Going to Los Angeles to go to college is just like her,” he said. “She is leaving high school as the number one student to go who knows where. With her drive, her future is bright. We have many first generation students and they are not always the most popular. She had to guide herself a lot through it. She always helped the other students and she has great empathy for people that struggle. Even when burned out, she is the kind of student that will psych a teacher up.” 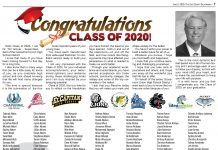