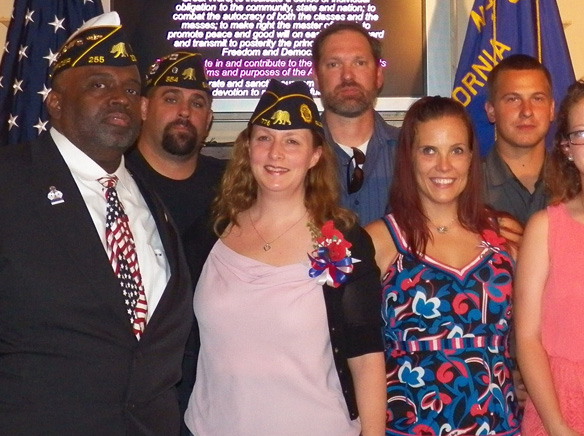 Veterans’ service organizations are preparing for an uncertain future. As the percentage in the population dwindles of those who are military veterans, how are the groups going to survive and remain viable? One approach to address this problem has begun here in The American Legion’s 22nd District, which is roughly contiguous with San Diego County. Over the past three years, District 22 Commanders have assisted with reviving at least one Post that had turned in its charter and closed operations. This endeavor is inspired by the view that veterans will be better served by having a locally accessible Post as well as the choice among American Legion programs that a variety of different nearby Posts can offer. The first such restoration was for Leyte Post 625 in eastern San Diego, which was completed in 2013. The second such Legion Post revival was in East County’s Santee. The Santee Post conducted its first official Legion meeting in mid-February 2013, reviving Lakeside Post 364, which had disbanded in 2004 as membership declined.

The latest American Legion Post restored in District 22 is Fallbrook’s Post 776. This past spring, Harry Woods, District 22 Commander 2013-2014, contacted Lora Wood, who had served as Historian for Vista’s Alvin Myo Dunn Post 365, but was living farther northward. She agreed to be the Post Commander who would stand up the resuscitated Post 776.

Santee Post 364 has been successful in filling a void for East County veterans and serving the larger Santee community. Veterans there range in age from 19 to 84, representing every conflict from World War II to the War on Terrorism, with a particular focus on younger veterans who served in the post-9/11 generation of military service. Commander Wood hopes to do the same in North County. For the current year, Post 364’s membership stands at 284.21 percent of goal.

A similar fate to that of former Lakeside Post 364 had shuttered the old Post 776 about a dozen years ago, with fewer members obligated to cover increased meeting-room costs. Michonski and Henriksen, based on their recent experiences, guided new Commander Wood through the maze of paperwork and hurdles required to receive official Post status within The American Legion. Wood expressed gratitude for the assistance, saying, “Everybody’s been helpful.”

The Fallbrook Post 776 Charter Post Member Initiation and Officer Installation Ceremony was held on Saturday, October 4, 2014. The celebration of this unique combined ceremony was hosted at Vista’s Alvin Myo Dunn Post 365. The Santee role modeling seems to be working, with the Fallbrook Post clocking in a first-report membership of 106.67 percent of goal. That ranks Fallbrook’s second among American Legion Posts in District 22, behind only Santee. Reiterating her thanks to Santee’s Michonski and Henriksen, Commander Lora Wood said, “This is going to be an adventure.”

Commander Wood’s objective is to focus on a solid foundation, before expanding with other American Legion Family affiliates.

“We are not rushing anything,” she said. “We are going to take it nice and slow to build a strong Post.” She welcomes anyone wishing to visit her Post. “Basically, our meetings are open to the public. We are here for the veterans and their families.”

We are all our own worst critics