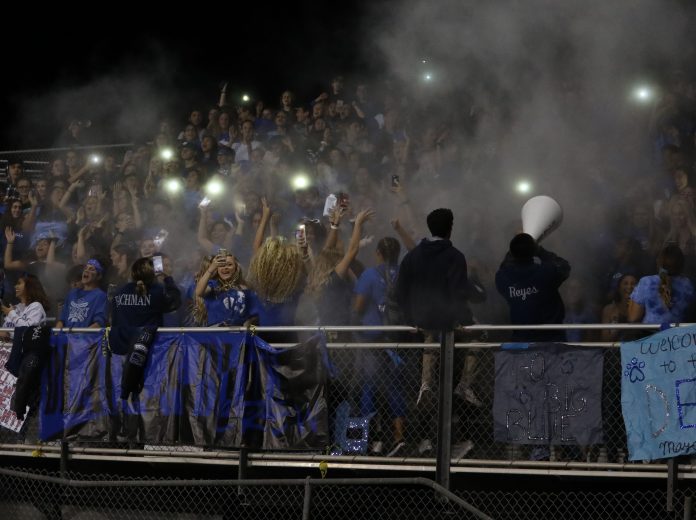 West Hills’s student section, looking across the field at Santana’s packed visitors stands, laid claim to their distinctive blue turf before the two teams even lined up for the kickoff.

West Hills’s student section, looking across the field at Santana’s packed visitors stands, laid claim to their distinctive blue turf before the two teams even lined up for the kickoff.

The banter rang across the field throughout the game, culminating in an impromptu halftime lightshow when dozens of students on both sides of the field whipped out their phones and turned on their flashlights during the lull between the band’s performance and the teams’ return to the field.

West Hills junior running back and linebacker Jake Maheu said the visitors’ turnout — a rare sight at the high-school level — is an example of what sets this series apart from others.

“You can hear the noise way more since pretty much their whole home stands are here because they live a couple miles down the street,” Maheu said. “It definitely changes the game, but if you stay locked in then it doesn’t really bother you that much.”

In the end, the Wolfpack lifted the Mayor’s Cup after beating the Sultans 21-11.

Senior quarterback Jordin Young completed 5-of-6 passes for 111 yards and three touchdowns. His 11-yard touchdown pass to senior Travis Deal that put the Wolfpack ahead 21-3 with 1:47 left in the game prompted the Wolfpack student section to chant “This game’s over” and “Why so quiet?”

In fact, the only time the fans were quiet was during the somber moment of silence for West Hills basketball coach and teacher Jeff Armstrong, who died of a heart attack at age 63 last week. Young said he dedicated his performance to Armstrong.

Wolfpack head coach Casey Ash said his players had a difficult week, especially those who also played basketball for Armstrong.

“When you’re a high school kid, your coaches are father figures for you and, in a lot of cases, maybe age-wise similar to your father’s age,” Ash said. “So this experience for some of these kids is kind of their first experience with death with somebody their parents’ age and that can be a very scary thing for everybody.”

Though the West Hills-Santana rivalry is intense and well attended, in recent years the shouting betweenstudent sections has been more evenly matched than the actual games. The Wolfpack have won seven years in a row and are 14-2 against the Sultans since 2004.

Ash said the winning streak is actually the toughest part of preparing for Santana because West Hills players sometimes take the matchup for granted.

“Sometimes they think it’s their right, whereas these kids on the other side, they really want that thing,” Ash said. “So trying to find a way to motivate our kids to really want it as much as a team that hasn’t had it in seven years, that’s the challenge each year when you’re getting ready for Santana.”

Santana head coach Tim Estes, however, said the rivalry is less about a history of tight games than it is about the history between players who grew up in Santee.

“Almost all these kids played little league and Pop Warner, all that stuff together, so they know everybody,” Estes said. “It’s been a big game and big crowd every time we play.”