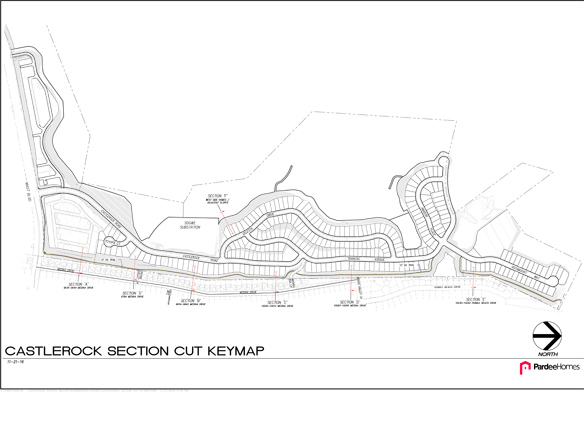 Santee neighbors to the controversial Castlerock housing project aired a variety of grievances to city officials and the developer recently, many questioning how it ever got approved.

While the 415-unit residential project next to Santee Lakes has been planned for about a decade and approved by both the cities of San Diego and Santee three years ago, residents have been logging complaints since grading began in July.

Santee neighbors to the controversial Castlerock housing project aired a variety of grievances to city officials and the developer recently, many questioning how it ever got approved.

While the 415-unit residential project next to Santee Lakes has been planned for about a decade and approved by both the cities of San Diego and Santee three years ago, residents have been logging complaints since grading began in July.

Those complaints apparently reached such a crescendo officials felt holding a special meeting Nov. 29 was the best way for residents to get answers.

As with any large development, many complaints centered on traffic worries, water drainage issues, and problems associated with moving tons of dirt from steep slopes. But the crux of the outcry was how Santee ever approved the project in the first place.

“This was simply stuffed down our throats,” said Roslind Vardrese who lives near the development. “How could we have stopped it?”

Santee officials said they tried to do that when San Diego began vetting the project that was formerly located inside that city’s borders. It even filed suit to prevent Castlerock from moving ahead to no avail.

San Diego approved it, and then brokered a deal with Santee to annex the 204-acre site in 2013. The Local Area Formation Commission, the agency that oversees municipal jurisdictions, last year, officially blessed that annexation.

Councilman Jack Dale, who moderated the two and a half hour session, told a packed council chambers that without annexation, Santee would be providing all the essential services without getting any of the property taxes and fees.

Several residents said developer Pardee Homes presented very different plans from what seems to be unfolding at the site near the intersection of Mast Boulevard and Medina Drive. They said elevations on earlier plans were about 10 feet above their homes, but plans displayed at the Nov. 29 meeting showed elevations of 55 feet in places.

“Ten feet I can handle,” said Jean Toscano, whose home abuts the development. “But they keep building it and building it. It’s not a gentle slope. We all feel like we’ve been lied to.”

Toscano and others said the higher elevations for the project have effectively destroyed the privacy they once enjoyed. Many cited an already heavily congested Mast Boulevard during morning commutes that will certainly get much worse once the project is completed next fall.

Although developers noted an additional lane on Mast Boulevard would be added, that won’t occur until the project is almost completed next summer. Dale noted that a possible widening of Highway 52 to relieve congestion would not happen until 2050.

Alan Kashani, director of project management for Pardee Homes, explained that the plans and drawings presented to the city and residents in earlier sessions haven’t changed.

He said while the current grading has caused some slides from the recent heavy rains, when the project is completed it will do a better job of removing storm water than what is currently in place. A series of drainage ditches installed at various elevations will deliver runoff down the slopes and greatly reduce potential flooding, he said.

Several residents said heavy trucks traveling to and from the neighborhood were creating dust storms, and speeding, endangering children. One resident said his solar panels were in constant need of cleaning because of all the dust, and that Pardee should pay for the cleaning.

Pardee officials said they want to address any complaints about the project and that residents can call them at any time if they feel there are any problems involving construction. The number is 858-737-7956; the email address is info@castlerock-community.com.

Stephen Houlahan, who was elected to the Santee council last month after an aggressive campaign emphasizing halting higher density development, raised the possibility of more housing construction next to Castlerock inside the city of San Diego borders.

Barrett Tetlow, chief of staff for San Diego Councilman Scott Sherman whose district abuts Santee’s western border, said while there are a few homeowners in the area, nobody has submitted any development plans. Even if they do, the land is constrained by open space zoning that limits building to no more than 25 percent of the property, Tetlow said.

“No one’s planning a new Tierrasanta in the East Elliot area,” he said, referring to the land around Mission Trails Park.

To a question from Dale about possible annexation of some land in that area to avoid a future Castlerock, Tetlow said the city would be open to that conversation.

Dale closed the meeting by pointing out the obvious to the assembled developer representatives and city workers. “I have to be honest with you. We don’t dig this thing.”