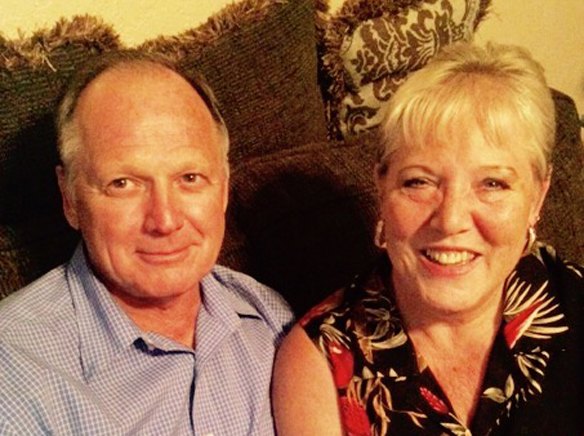 Linda Poyner knows firsthand what a difference loving foster parents can make in the life of a child. That’s because when she was growing up in a farm town in Wisconsin, Linda was that child.

Linda Poyner knows firsthand what a difference loving foster parents can make in the life of a child. That’s because when she was growing up in a farm town in Wisconsin, Linda was that child.

At age 16, Linda called Child Protective Services and turned in her parents for severely abusing her and her seven siblings. She was removed from her parents’ home and went to live with a family she says was kind and warm. Nearly 50 years later, Linda still lights up as she describes her foster parents. “They loved me like their own and even offered to put me through college,” she says, beaming.

When Linda brought up the idea of serving as foster parents with her husband Bob, he said it sounded like a good idea. The timing wasn’t right for them, though. As newlyweds, they were raising Bob’s two young children from a previous marriage and both were working full time.

Those children are now grown and have little ones of their own.

From the family room in their Santee home, where three-week-old “Little Peanut” naps in a rocking cradle, Linda explains how the retired couple began fostering four years ago. “I have helped everyone take care of their children and it has been a gift, but now it was my turn to foster babies,” she says, as Bob smiles affectionately. Though Linda was the driving force behind the decision, Bob is fully on board, telling stories about their five past placements and new arrival. They laugh, recalling the toddler who adored Bob and told Linda that he wanted “Grandpa do” everything, rather than her. “Oh, I was chopped liver,” Linda says, jokingly. But by the end of the little boy’s stay he was equally attached to both Linda and Bob.

“That’s what they need,” Linda says. “They need to attach and bond and know they are safe and loved.” As for the people who tell her they could never be foster parents because they would grow attached, Linda says, “You darn well better get attached because that’s how children learn to trust.”

The couple recalls an infant who initially refused to rest his head on Linda’s shoulder when she held him. “It took weeks, but he finally nuzzled into me and realized he was safe,” she says. They have had other placements who suffered physical and emotional trauma before being placed in their care through Angels Foster Family Network. They recall a baby girl who arrived with two broken legs and arms in casts. “She had haunted eyes, but when she left she was aglow with rosy cheeks,” Linda says. They have also spent many long nights with an infant who arrived at their home addicted to heroin, even though he was only eight days old.  “It’s very hard so see how tough the world can be for some children,” says Bob.

They received training in how to care for traumatized infants and toddlers during their certification process with Angels, and say the nonprofit provides ongoing education and support. “When we went to the information session, we got a really good feeling about Angels,” says Bob. “They’re willing to give 150 percent.” Linda adds, “They’re always there for questions and are even interested in you as a person.”

The couple agrees that serving as foster parents is hard work, but worth the effort. “The most rewarding thing is seeing the changes in the children,” says Linda. “I also love the big hugs, and seeing my husband’s sweet and gentle side.”