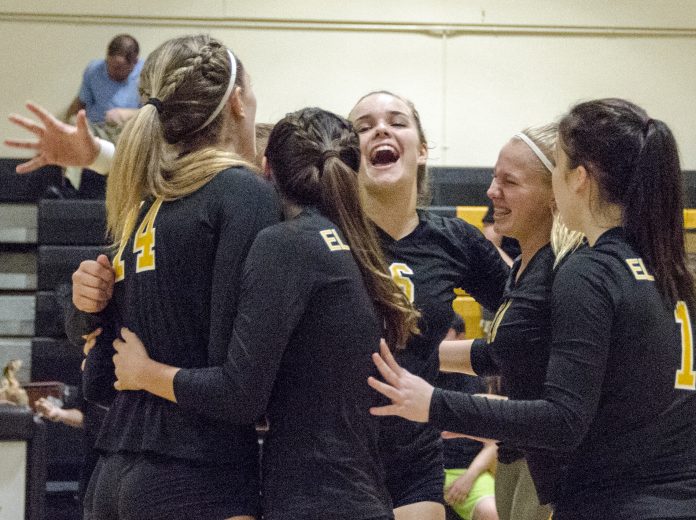 Santana had never played in a CIF girls’ volleyball finals match, and early against High Tech San Diego it showed. The Sultans were trailing 2-0 and fell behind 8-1 in the third set when something changed.

They started having fun.

Santana’s nerves disappeared with each point. Mistakes went from being morale killers to a joke between friends. Timeouts turned into an opportunity to dance and laugh.

Santana had never played in a CIF girls’ volleyball finals match, and early against High Tech San Diego it showed. The Sultans were trailing 2-0 and fell behind 8-1 in the third set when something changed.

They started having fun.

Santana’s nerves disappeared with each point. Mistakes went from being morale killers to a joke between friends. Timeouts turned into an opportunity to dance and laugh.

“When we’re stressed out and stuff, it’s a lot more tension, a lot more pressure,” Schad said. “When you mess up then it’s 10 times worse because everybody’s faces are down, but when you’re having fun, everyone else is just laughing around you and they’re actually enjoying volleyball and they’re having fun with this game.”

Head coach Megan Wale said she believes her players are better when they enjoy themselves.

“We absolutely encourage them,” Wale said. “I mean to an extent. We can’t just goof off and mess around, but when you make a bad play we’re really hitting home, cheer the person up. Cheer the person up and make the next play.”

“Once we get one good block or one amazing hit, we all get pumped up and it helps us play so much better,” Cook said.

Santana struggled defending High Tech’s serves in the first two games, allowing six aces in the first set and five in the second. The Storm’s 8-1 run to open the third featured three more aces, but the Sultans tightened up their returns and allowed only one more ace in the set as they outscored their opponent 24-13 the rest of the way.

The same pattern emerged in the fourth — Santana fell behind 7-4 after allowing three aces, then outscored High Tech 21-13 without giving up another ace until the fifth set.

Wale said she did not make any significant changes to the game plan. Instead, she credited the improved returns to the Sultan’s attitude adjustment.

“Our serve receive definitely fell apart for a little bit there,” Wale said. “I don’t know if it was stage fright or what was going on, but I think they just kind of figured out they need to step in the front of the ball and we need that first pass.”

Santana is the Division IV runner-up after a 19-9 (6-2 Grossmont Valley) season. Schad said she wants her younger teammates to build on this year’s success.

“Now, all I can hope for these girls is to continue on that legacy and get a patch that says champions,” Schad said.

But even as High Tech showed off their champions patches on the other end of the court, Santana’s players did not shed tears.

They were too busy smiling and laughing.

The Vaqueros (28-12, 10-0 Grossmont Hills) trailed by as many as nine in the first set and 12 in the second set. Head coach Eric Sato said the Bobcats (35-7, 9-1 Avocado East) were a difficult matchup, especially with their skilled servers.

Sage Creek had 10 aces in four sets, and its serves forced El Capitan to scramble. Instead of clean digs setting up plays at the net, wild hits pulled players like junior outside hitter Stephanie Adams towards the back line. Sato said Adams is a focal point of the Vaqueros’ attack.

“She’s been carrying the offensive load the whole year for us,” Sato said. “I thought she played pretty well. It all comes down to if we don’t pass the ball well, then we can’t get her involved and it’s off the net.”

The Vaqueros settled down in the third set and improved their returns, allowing Adams, senior outside hitter/setter Sarah Markle and the rest of the front line to attack the net. Trailing 11-7, they went on a 14-2 run to take the lead in the set, which they won 25-19.

“I can’t take credit for all of it, but I thought our team did come to play today and we played very well together,” Adams said.

Though the Vaqueros lost the match, they are still alive in the state Division III tournament. El Capitan was seeded third and hosts Archer School for Girls Nov. 6, after this story’s deadline.

“I’m very proud of this team,” Adams said. “I think we’re all very proud of our performance. We did get cut off short but we’re ready for state and we’re just keeping our heads up.”

If the Vaqueros make a run in the state playoffs, a potential rematch against the Bobcats could happen in the Nov. 10 regional semifinals.

Anderson sworn in as supervisor