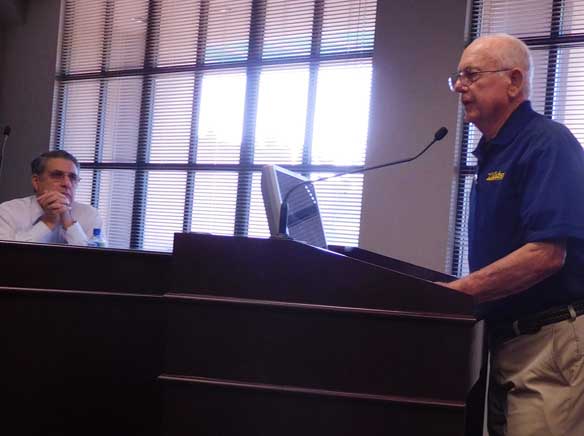 At the end of a contentious meeting that lasted nearly five hours, the San Miguel Consolidated Fire Protection District’s Board of Directors voted 4-3 to take steps towards returning full control over its fire protection and terminate its contract with Cal Fire.

At the end of a contentious meeting that lasted nearly five hours, the San Miguel Consolidated Fire Protection District’s Board of Directors voted 4-3 to take steps towards returning full control over its fire protection and terminate its contract with Cal Fire.

Voting for the motion were San Miguel Board President Theresa McKenna, and Directors Jim Ek, Karrie Johnston, and Mike Vacio. Voting against it were Directors William Kiel, Dan McMillan, and Dave Rickards.

In 2012, San Miguel’s board voted to enter into a five and half year contract with Cal Fire. The board said years of revenue declines caused by reduced property taxes from the recession resulted in heavy operational losses. In addition to personnel cuts, the district closed one station in Dehesa.

However, as of the July 6 vote, the majority of the current board says the district is on much stronger financial footing, and able to return to full control of its fire protection.

“The funding is available to go back to stand alone,” said McKenna. “If we do not get out of this contract now we never will…It’s now or never.”

McKenna, who was elected to the board in 2014 on a platform of returning the district to local control, said the former San Miguel fire chief steered the board with faulty data that helped persuade it to contract out with Cal Fire. She provided the board with a report that showed the district was losing money, not increasing savings as had been promised.

The meeting held at the district’s Spring Valley headquarters was heated in more ways than one, literally because of the packed room, as well as charged, emotional testimony, mainly from current and former San Miguel firefighters. Many of them claimed to be dealing with physical and mental problems due Cal Fire’s work schedule of 72 hours a week compared to the 56-hour schedule they had at San Miguel.

“Working three, 24-hour shifts in a row is taxing on anyone’s mental and physical health, especially with sleep deprivation,” said Ron Quinlan, a Cal Fire captain with the district.

Corey Powell, a current San Miguel fireman, said in an email read at the meeting, “Believe me when I tell you that this schedule is extremely unsafe to be working at such a busy station. Three days is often too much when you’re getting very little sleep…I have witnessed my engineer falling asleep at the wheel.”

Advocating for a delay to have an outside consultant conduct a study of the situation, Kiel said a micro study done by San Miguel’s chief financial officer shouldn’t be relied on. He said from his read of the numbers, going back to a stand-alone status isn’t financially possible.

“I hope I’m wrong, but the numbers I’ve looked at this time don’t support this. Terminating this contract is not in your best interests,” Kiel said.

Rickards, a former firefighter, said the board was rushing an important decision without getting all the information it needs. “It seems like this had to be done yesterday,” Rickards said. “I see alarm bells and I want to make sure if it’s done, it should be done right.”

Several speakers brought up the financial pitfalls of terminating the state contract. Victor Mosso, a district resident, said regardless of what decision the board makes, the district is facing either unfunded liabilities of either $32 million or $50 million, most of it in owed pension and benefits to retired employees.

Patrick Walker, the union rep for the local Cal Fire, said going to a stand-alone status would mean the loss of 70 firefighter jobs.

Chris Brainard, a former San Miguel employee, said while he had utmost respect for Cal Fire, their system of promoting means good employees usually have to go elsewhere and that results in a significant amount of turnover, which has negative impacts on remaining employees.

In addition, he said the district has no control over contractual salary increases by Cal Fire.

“If anything was rushed through it was the Cal Fire contract,” said Vacio.

In a statement following the vote, San Miguel Fire Chief Darrin Howell said residents of the district would see no change in the delivery of services, and that fire protection and paramedic services would remain at current levels.