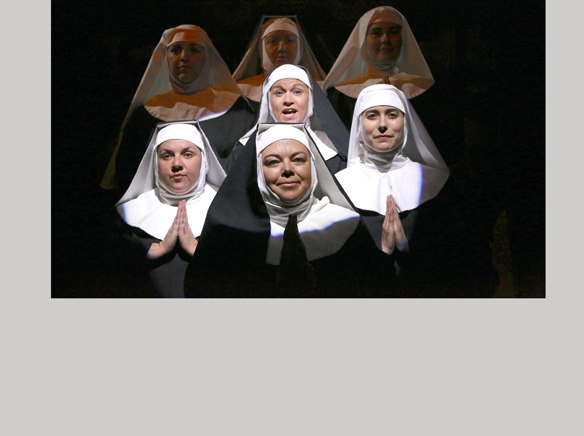 If body language experts were reading the cast of “Nunsense: The Mega-Musical” they would confess to facial expressions that demand smiles back, humor-inspired dance moves, and comic presence that defies seriousness. Pickwick Players’ cast fulfilled this body language skill set in a new version of Nunsense on June 10 at the Off Broadway Live theater in Santee.

If body language experts were reading the cast of “Nunsense: The Mega-Musical” they would confess to facial expressions that demand smiles back, humor-inspired dance moves, and comic presence that defies seriousness. Pickwick Players’ cast fulfilled this body language skill set in a new version of Nunsense on June 10 at the Off Broadway Live theater in Santee.

This production could be called blessed, celestial, and provokes musical theater religious fervor. In all of its beautiful irreverence, “Nunsense” had a superb opening night, and is more than worth the time to go see it while you can. If you love music and comedy, this is the show to see as the Pickwick Players provide a hysterical night of entertainment.

Producer Cameron Williams said, “It is an outstanding showcase of talented ladies,” and that is highly understated. These ladies were nothing short of phenomenal in every beat of this derisive musical.

Eight ladies to be exact. Two priests, one of whom is the piano player and musical director Kirk Valles. Director Thomas Fitzpatrick, cast as the Father Virgil, called the actresses “triple threats” as in they can sing, dance, and act. And he is right. From chorus, to tap, to ballet, all the sisters were in time, and on point with their collaborative wit, songs and dance.

Pickwick Players’ production involves the core setting of singing and dancing nuns forced to raise money after a vicious and deadly vichyssoise soup killed 52 of their sisters and were forced to do a fundraiser to bury their beloved only after Revered Mother Mary Regina (Jennifer Pruviance) foolishly spent some of the money on a plasma TV and not on burial costs, leaving a few in the fridge to keep cool until money could be raised for a proper burial.

The triple threat sisters are Debbie David (Sister Robert Anne), Amanda Everett (Sister Julia), Ferril Gardner (Sister Mary Amnesia), Danielle Gulihur (Sister Mary Luke), Eliana Payne (Sister Mary Wilhelm), Purviance, Meredith Russo (Sister Mary Hubert), and Mariel Shaw (Sister Mary Leo). All things nun were exorcised out of this talented cast with one-line jokes, great vocals, physical comedy using nun outfits plus, and everything catholic in an irreverent blast of there-is-only-one-goal—to induce laughter. And that it did as the cast kept the audience engaged and in constant laughter from curtain up to curtain down. In the intimate setting of Off Broadway Live, nothing was missed from the slanted glare from Reverend Mother to the frustration of being second in command of Sister Mary Hubert. Vocals were superb with powerhouse performances blended in with sweet harmonies. Even through the laughter, the musical talent of the cast is undeniable and the range and style of singing shined through all of the laughter and shenanigans.

Garder (Sister Mary Amnesia) made you laugh with a simple smile and a blank look in her eyes, but beyond that blank look of confusion came some wonderful vocals that ranged from sweet melodies, to operatic notes and good ole’ country twang. This was remarkable to watch as she performed “I Could’ve Gone to Nashville” that used all three of these in beautiful transitions.

Russo’s high range and formidable voice sliced through the room like a knife, all in the right places, and whether solo or in tandem, was a joy to listen to.

Of note Purviance’s physical comedy springing out of an unintended use of a substance, rush, led to free Willy jokes, a Shelly Winters’ cap-sized cruise ship Poseidon swim, and doing what is really hard to do, act while appearing high on Rush. Shaw’s dying nun scene with David, juxtaposed ballet shoes on a nun dancing (Shaw) amidst a left over student production of Grease set that was beautifully designed by Barron Henzel. Choreographer, Alisa Williams, used patterned movements that spiked out of an audience member’s vision of a Las Vegas’ lounge act, Riverdance-esque tap dancing, and a cruise ship cabaret act.

Lighting designer, Xavier Luevano, had lighting/sound technician, Nicholas Webb, using a spotlight as comic movement to follow and purposely miss the solo performances of what seemed triple threat times three in David’s rendition of the song “I want to be a star.”

All of this factitious religious order known as community theater troupe Pickwick Players is to be applauded for their teamwork and individual contributions. Including band members Raynald Marte, William Ah Sing, and Steven Brown not to mention assistant director Chris Powell and various sponsors.

Costume design by Thomas Fitzpatrick, Nancy Howe, and Jane Russells’ nun habits were reminiscent of the religious order of Clarisses (or Poor Clares only in black) and/or religious order of Party City costumes.  The priests’ confession inspiring clerical collars with black attire placed the cast as stepping right out of a fake convent known as Mount St. Helen’s. The nuns’ rosary belts also were used as bawdy, little twirlers in a chorus line.

Fitzgerald, who coincidentally is part owner of three restaurants named “The Mission,” made it his mission to bring to life a new version of Nunsense that included a new song, new lines and characters.

Fitzpatrick, originally from the East Coast, whose brother Joe worked with playwright Dan Goggin when he was spawning “Nunsense” via developing a pre-Nunsense greeting card line, was also an acquaintance of Goggin. Fitzpatrick has also directed musical theater productions at a number of theaters in the San Diego area. The cottage industry of Nunsense has its own website www.nunsense.com.  Goggin’s invention has had a variety of Nunsense spin-offs and as recent as December of 2015 been pitched as a potential TV show.

To catch a dose of convent life as interpreted by this mega-musical “Nunsense” visit  www.pickwickplayers.net or call 619/448-5673.  Next weekend ends the run on June 19 with five more performances remaining.

Tiramisu Trattoria is an elegant, intimate choice for dinner

La Mesa pen and ink artist to be featured at Mission...