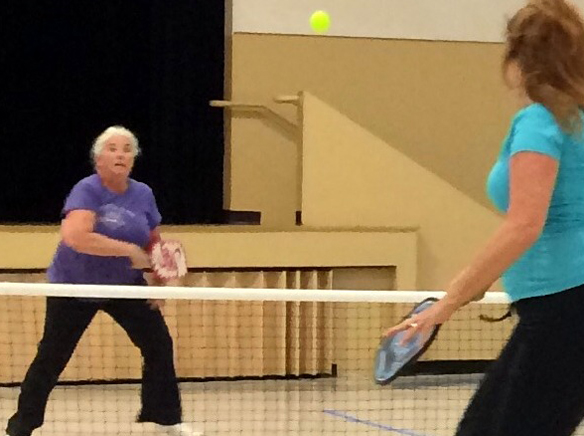 Contrary to its funny-sounding name, no sour faces can be found on the people who play pickleball at the Lakeside Community Center. There are, however, a lot of healthy laughs and big smiles, as on the evening of May 1 when about 25 players gathered to play.

Contrary to its funny-sounding name, no sour faces can be found on the people who play pickleball at the Lakeside Community Center. There are, however, a lot of healthy laughs and big smiles, as on the evening of May 1 when about 25 players gathered to play.

“That was a good workout,” said Gayle Webster after she finished playing with Eve Babcock and Ron Chance. Webster wiped her face with a towel and sat down in one of the folding chairs lining the wall facing the two courts. She cheered on her friends, clapping at their good moves.

The game with a funny name is played on a badminton court with the net lowered to 34 inches at the center. Played with a perforated plastic ball and lightweight racquets, pickleball is easy for beginners to learn. Yet the players can become so skilled at it that the game will develop into a quick, fast-paced one with individual touches.

Though pickleball was invented in the mid-1960s as a children’s backyard pastime, it became popular among adults as a fun game for all levels of skill. Essentially, it is a racquet sport in which two, three or four players hit the ball over a net.

“You could say pickleball is a cross between tennis and ping pong,” said Gwen Leeper.

“And badminton,” added Wayne Mushet, who has been playing pickleball with his wife Diane for the last year and a half.

Wayne Mushet explained a little more about how to play the game.

“You serve the other team, the ball has to bounce, then the team returns it allowing it to bounce once, and then after that you can just fly. The strategy is how you serve and how deeply you return the serve, The idea is that since this is as social sport, there is no slamming of the ball inside the ‘kitchen’ area of the court, which is that blue line around the net,” he said.

The first player to score 11 with at least two points ahead of the other players is considered the winner.

“It’s addicting,” Mushet said. He stood and picked up one of the light-as-a-feather racquets.

“This is the most popular game in the United States right now,” Diane Mushet said. “And it’s easy to understand why. You play underhand, so it’s better on your body. It’s not as hard on you as tennis is.”

Pickleball players say they get a good workout from the game.

“I used to have back problems, but ever since I started playing, the pain is gone,” said Mark Anderson, who picked up the game a year ago. “And if you get one of those Fitbits, it’ll show that playing four games of pickleball is equal to running one mile.”

The social benefits are also huge, according to everyone playing at the Lakeside Community Center on May 2.

“It’s a nice group of people here. I know everybody here,” Leeper said.

“It’s unusual to have such a diverse group of people get along and respect each other,” said Anderson.

Still, it’s the simple joy of the game that gets people to try playing pickleball in the first place and then keep coming back.

“I look forward to coming so much that I still get little butterflies in my stomach when Wayne and I are on our way to play here,” Mushet said.

“We encourage people to watch a match before picking up a racket for the first time. The rules are straightforward and easy to learn,” said Ashley Westbrook, Lakeside Community Center Supervisor.

For more information, go to www.sandiegocounty.gov/parks/centers/lakeside.html.