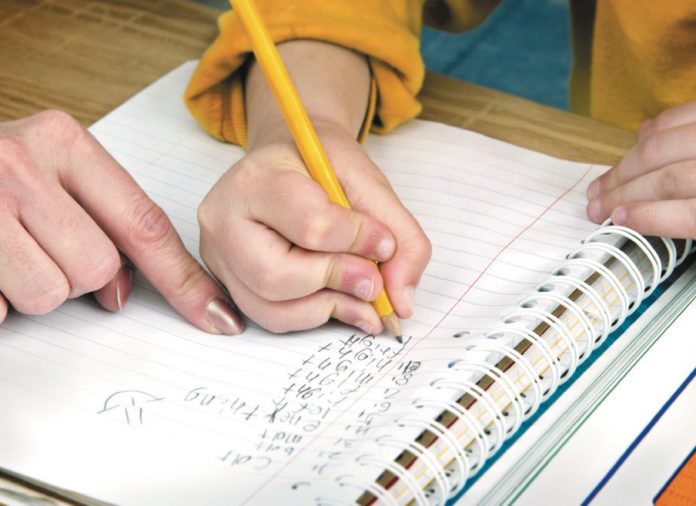 Gutekunst, a high school sophomore himself, said he came up with the idea after volunteering as a tutor for a school project where “we’d go every week or so and tutor these children, and I got to see them grow not just academically but emotionally and physically and it was a really fantastic experience”.

When he started looking for more tutoring opportunities, Gutekunst said, he realized most of the programs were adult-driven, adult-led and “took not only a lot of the fun out of it” but also the experience of connecting with a fellow student.

“I think one of the benefits of having peer-to-peer tutoring is you’re able to really make those connections… You’re meeting with these children from week-to-week and you’re kind of a comfort to them in tough times like these with COVID,” Gutekunst said.

Kid by Kid has a simple structure: Gutekunst vets out students who are interested in starting a tutoring chapter at their school. Once approved, those chapter leads can then recruit tutors at their own school so it functions within its own student population— chapters only consist of tutors who know each other from the same school. Those tutors then help students who live in their area but do not necessarily attend the same school.

The program is entirely student-led and school officials might not even know a chapter exists on campus; Gutekunst said they are sometimes listed as clubs at some schools.

“We reach out to a lot of immigrants, refugees, English-language learners by sending flyers to their schools then gauge the interest of parents from those schools,” Gutekunst said.

Students in need of tutoring are paired up as much as possible with tutors who have similar interests and hobbies.

“The only interface we have with schools is with students themselves,” said Gutekunst, who describes the program as student-driven.

The tutors utilize free material widely available online such as KhanAcademy, but organized ahead of time so they are able to present and review ideas with students in a one-on-one conversation.

“Everything is on Zoom for now, the tutor can share their screen and work on homework, or maybe they’ve created a lesson review. More often than not, we’re going to outside sources and walking them through step-by-step,” Gutekunst said.

Generally, tutoring sessions run 90 minutes long: 30 minutes are spent on preparation and an hour is spent on tutoring itself.

Pre-COVID, he said, tutors would meet at a location like a church and students would come in and out but “it was inconsistent. With Zoom, you get to see into their lives, you’re in their house with them which not only makes for a closer connection than ‘we’re going to a predetermined location for an hour of tutoring’ but it is also eye-opening for a lot of the tutors,” Gutekunst said.

As the premise of Kid by Kid is based entirely on the concept of students helping other students, the true measure of success is in how many students they continue to reach.

“The end goal is to reach more students’ lives, uniting communities with friendship between learners and tutors. After we go through San Diego, we may expand to Southern Californian and then go national,” Gutekunst said.

Although the pandemic has created some hurdles, Gutekunst said it has also been convenient to utilize Zoom and he anticipates they will continue to use an online forum as it is convenient but also allows for connection.

“The real value of Kid by Kid is the connection. You know, even though we market ourselves as a tutoring organization, a lot of people come back for the tutors themselves,” Gutekunst said.