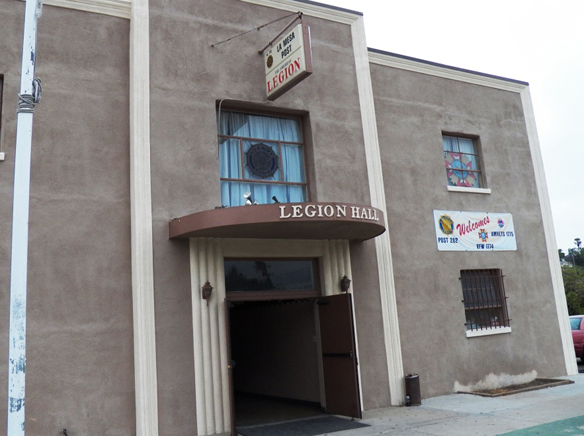 The American Legion conducts a solemn ritual known as Eleventh Hour, which acknowledges veteran-members of the organization who have recently died. Meeting room doors are closed as Legionnaires gathered there stand in reverence. The Chaplain calls out the name of a comrade departed from among their ranks; a bell is tapped twice. Hearing silence, the Sergeant-at-Arms states, “No response,” salutes, and the Chaplain returns salute.

The American Legion conducts a solemn ritual known as Eleventh Hour, which acknowledges veteran-members of the organization who have recently died. Meeting room doors are closed as Legionnaires gathered there stand in reverence. The Chaplain calls out the name of a comrade departed from among their ranks; a bell is tapped twice. Hearing silence, the Sergeant-at-Arms states, “No response,” salutes, and the Chaplain returns salute.

But what if someone, Legionnaire or not, were trying to reply from beyond the barrier of death?

Tomas Luna, Commander of Post 282, is a 10-year Marine Corps veteran, beginning in 1978. His sea duty included service in the Persian Gulf. His military training and level-headedness are unassailable. Luna believes that the building housing his Post is haunted.

Luna, among several others associated with Post 282, believes this because of frequent phenomena at the Post that defy natural explanation. Footsteps can be heard when no one is there. Doors open and close of themselves, and doorstops are moved. The Post security cameras, which are equipped for night vision, record luminous gauzy orbs surrounding the second floor bar and entryway. Furniture seems to be moving on the floor overhead, bathroom toilets flush, and music sounds from the Post piano’s keys.

All when no human is present.

Luna has felt an invisible something brush past his ear and seen curtains move, where there could be no air currents. Cigar scent has wafted along the staircase, in a nonsmoking facility.

Gerry Cadwalader has been an American Legion Auxiliary Unit 282 Member for 47 years. She worked at the Post for 25 of those years, the first woman bartender in the Post canteen. She declares herself possessed of “a vivid imagination from childhood” and as having occasional premonitions of events to come. While working in the first-story bar, she has heard upstairs noises, as of someone walking, things being moved across the floor, and she has seen doors that were closed mysteriously open on her return, and vice versa. Cadwalader was longtime mistress of ceremonies for the women-only “Hag Party,” which ran annually for 52 years at Post 282. She found eerie the fact that packed-away costumes were sometimes laid out for the show in the shuttered offstage area, and she surmises the untouched piano is played by the ghost of the party’s musician. She believes one ghostly spirit haunting the Post belongs to World War II veteran Larry Page, who sat at the bar every day.

Post 282 was dedicated in 1947, after members had excavated the grounds. Post historians believe the parcel was once site of a courthouse. Maritza Skandunas, of San Diego Ghost Hunters, has paid the Post nighttime visits twice with detection gear to pick up images, sounds, heat signatures, and electromagnetic fields. Skandunas has been tracking spirits for around 10 years, and her work includes assistance to local police departments in cold case investigations. She reports that her equipment detected whispers, talking, and shuffling of feet. She felt a palpable sense that ghosts were trailing down the stairs behind her.

Angela Bertolino, a local amateur paranormal investigator, surveyed the Post in early October. After she ran an initial electromagnetic field detector sweep, her EMF instrument delivered anomalous results, which inexplicability she concludes could itself be evidence of spiritual activity. She plans a return-visit investigation with an overnight stay.

Luna describes himself as curious, open-minded, and a former skeptic until his personal experiences convinced him otherwise. His invitation to doubters, “Come visit the Post, and observe for yourself.”

A glimpse into the life and faces of the Native American...