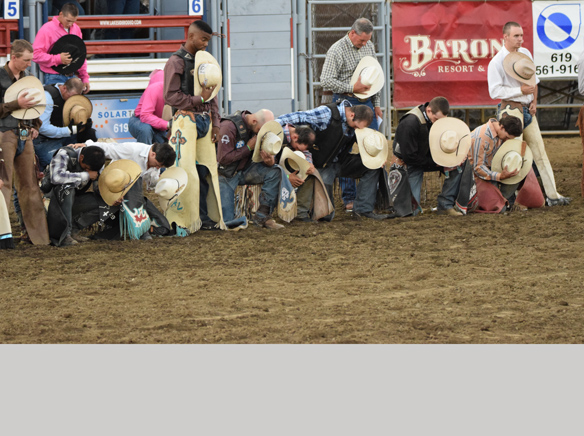 It was two nights of extreme sports entertainment at the Lakeside Rodeo Grounds over the weekend as the Lakeside Optimist Club held its 18th Optimist Bulls Only Rodeo with two evening performances on July 15 and 16. Everyone came prepared for night of family fun and there was no disappointment in the action in the arena. Contractors brought in their highest-ranking bulls that gave bull riders from around the world a wild ride for the payout.

It was two nights of extreme sports entertainment at the Lakeside Rodeo Grounds over the weekend as the Lakeside Optimist Club held its 18th Optimist Bulls Only Rodeo with two evening performances on July 15 and 16. Everyone came prepared for night of family fun and there was no disappointment in the action in the arena. Contractors brought in their highest-ranking bulls that gave bull riders from around the world a wild ride for the payout.

Lakeside Optimist Jerry Branson Bulls Only Rodeo Contestant & Contractor Coordinator said the event went really well this year with a lot of people signing up to be part of the action. Considered one of the most dangerous sporting events in America, bull riding is center stage of this yearly fundraiser for the non-profit Lakeside Optimist Club event and all proceeds from it go right back in providing the needs of the youth of the community of Lakeside. But this rodeo is more than just bull riding with the Bulls Only Rodeo’s signature events such as Wild Horse Racing and the Mutton Busting for the young rodeo riders in training.

“We had 15 guys from the International Professional Rodeo Association where we usually have four,” said Branson. “Five won money on the first go-round on Friday, three won money in the Saturday show and a kid named Jonathon Costa from Brazil was here and he won some money. So we have from Canada, to California, to Georgia, Brazil, Mexico, all entered into our rodeo and that’s a really good international rodeo. We had six in the top 15 in the IRPA come over and four or five of them were from Georgia.”

And the Georgia riders put on a show and displayed their love and expertise in the sport with four out of the top six average earning top money.

Junior Saenz, from Valley Center, CA was the only local bull rider to make it to the top six rankings. Saenz, born in San Diego, has been rodeoing for 17 years. He began at the age of 16 riding in Mexico, learning the sport, and for quite a while for no purse to take home in the end.

But this is Saenz’s last year performing as he will retire from bull riding at the end of the season.

Saenz said he figured if he was already risking his life, why not try it on a heavy bull. So he began the Midnight Rodeo. They would put me in the back of the arena and he could not go to the bar or dance floor or anywhere because there was alcohol. “So I’d just ride bulls and they’d kick me out,” he said.

Saenz was State Champion for Baja California in 2001, when he was turning 19. Then went to Nationals in Mexico.

“I knew I had something to prove on the other side of the border in the States,” he said. “I am a bull rider. I came to this side and met a lot of great guys and started rodeoing. Ever since then I’ve been going through the Professional Rodeo Cowboys Association, semi-PRA rodeos, Northwest Professional Rodeo Association rodeos claiming jackpots all over the place. It’s been a long journey. I’ve got a lot of stories.”

The IRPA is an open jackpot. The guys who ride through the IRPA, the points count towards their association. But Saenz is a PRCA cowboy, riding with the PRCA since 2002.

With a new baby girl, and three boys, Saenz said it is time to move on.

“It’s time I hang my spurs up. I’m going to hang the twisted shanks and put on the straight ones to ride horses instead of bulls and focus on my family more,” he said. “I need to polish these little rocks. All three of my boys ride.”

“I need to focus on them now and let them shine instead of me,” said Junior Saenz. “I’m okay with the teaching. I have an arena at my house with a bucking chute for steers and calves. I’m trying to get a bull riding school together and make a summer camp for kids that want to really learn how to ride bulls, I can teach. It’s all about the kids.”

Saenz said that the sport of rodeo is misrepresented by people think that the sport hurts animals or mistreats them, but he said these contract bulls are bred to buck.

“And these bulls love to buck,” he said. “We put a flank strap on their waste. Most of the bulls don’t even need that. The only reason we put them on is for fairness for every rider. The contractors, the owners of these bulls, know the tightness needed. Can’t put it too tight or the bull is liable to lie down or sit. Some need it, some don’t. But nowadays, these bulls that are coming out, they just love to buck. It’s on there almost just for show.”

Saenz said the greatest thing about this sport, bull riding or rodeo is that the whole town is there. “You get to see your family, friends, meet people. It’s not just the action in the middle of the arena, it’s also the action in the stands. From the smallest baby to the oldest grandma and grandpa, they’re there. They want to watch it. It brings the family together and it’s not expensive to watch. It’s a great show. It’s a bit dusty though. That’s what it’s all about.”

There are a lot of misconceptions.

He said he believes you need to start training for bull riding when you are young, and that is where he comes into play the most now. Not only with his kids, but also with the young riders just beginning the rodeo circuits.

“I’m a guy with a lot of experience. You have to be the right weight, you have to have a healthy diet, and you have to learn everything,” he said. When asked about what he compares bull riding to, he said it took him a lot of thought and could not find anything in extreme sports that even compared.

“Then I had a thought. It’s like 30-foot wave surfing with sharks on the bottom. You have to have balance. You mess up one little bit and you’re going to hit the ground hard. And there’s going to be a shark waiting for you when you do. You got to get up fast,” he said.

Saenz said he has the upmost respect for the bull fighters in the arena when he is riding.

“It takes a special person to be a bull fighter. They put their lives at risk for people they don’t even know,” he said. “I know a lot of bull fighters. I don’t always get to meet them all but I have to take the time to thank them, just shake their hand. They are going to be there for you. These guys are there to keep you safe.”