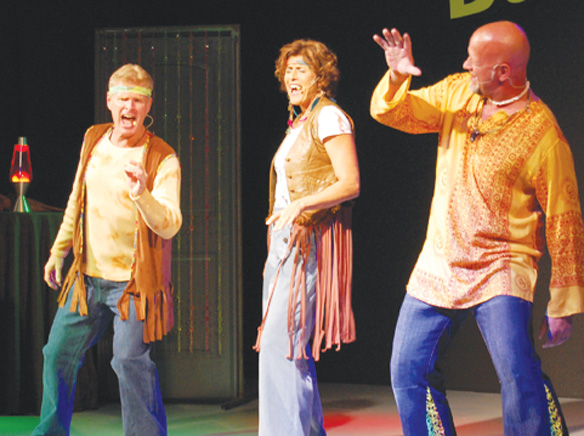 Modern American history has been decreed by decades. Society often attempts to pick apart these years of cultural change in an effort to figure out which is the “Best Decade of All Time”.

Modern American history has been decreed by decades. Society often attempts to pick apart these years of cultural change in an effort to figure out which is the “Best Decade of All Time”.

Whether it is the music, clothes, television shows, or the social actions of the era, people debate about which era had a bigger cultural impact on America. Last Friday night, Off Broadway Live’s “Decades–The 70s” took its audience back to one of the most iconic decades of all time, and in the process made a strong paradigm for it taking the crown as “best.”

Every weekend since August 23rd, Steve Rolf, Bob Schulze, and Roxanne Fulkerson took the stage at Off Broadway Live in Santee to tell the story of the 1970s. This three-person show is advertised as a musical revue of the decade and it ends up resembling the variety shows that became so popular in the iconic decade. Singing, dancing, acting, comedy, and history are all combined to mostly positive results.

“Decades – The 70s”, as a show, is structured around the music. Opening with the 1971 classic “I Just Want to Celebrate” and closing with the 1978 iconic song “September”, the show runs the gamut of musical variety that was present throughout the ‘70s. Tune after tune, the show guides you through the tumultuous change that came out of the 1960s and into the development of the decade’s new identity.

The trio of Schulze, Rolf, and Fulkerson serve as tour guides as they sing, joke, and tell stories about what the era held.

Truth be told, the trio of performers picked for the show could not be any better. Schulze and Rolf have an undeniable chemistry that shines through when the two of them are on stage together and Fulkerson plays off of the duo perfectly. Musically, the trio was top-notch as well. Their harmonies were spot on and they complemented each other’s voices perfectly.

Separately though, each provided their own special something to make the show as successful as it was.

Schulze managed to inject a ton of the show’s humor and he provided his deep gruff voice to each song on the musical end. A perfect example of the two working in conjunction was Schulze’s performance of “Ain’t No Sunshine”. Schulze both honored and joked about the song with his own tenderly raspy rendition alongside a few jabs at the lyric’s repetitious nature.

Rolf was Schulze’s impeccable complement. Performing more of the ballads of the 70s, Rolf floated along tracks like Barry Manilow’s “It’s A Miracle” with ease. His voice was silver-tongued and clean, even when he let loose during an amazing performance of “Dream On” by Aerosmith. To top it all off, Rolf brought a true sense of genuineness to the stage that made him all the more likeable.

Serving as the icing on the cake, Fulkerson was a great forte on any end of the musical spectrum. From the Streisand ballad “The Way We Were” to the spunky Linda Ronstadt song “You’re No Good”, Fulkerson tackled each track with an unmatched fervor and a voice made for the era and its music.

Whether apart or together, the trio made the show more than a meek look back at the music of the ‘70s and instead turned it into a time-traveling party that paid reverence to an age gone by.

That being said, “Decades – The 70s” was not without its problems. At times, the show bordered on cheesy, almost similar to a PBS pledge drive with the show’s earlier history lessons. Even then, their attitudes, humor, and raw singing talent pushed the cheesiness aside.

On top of that, there was the issue of stage presence. Having only three performers, with some of them leaving the stage here and there throughout the show, it sometimes felt a little empty.

Before it could become a true issue though, they would encourage audience involvement by bringing audience members on stage and encouraging dancing from the seats and that more than filled out the stage. Even minor flubs in singing are made entertaining and fun. For example, Schulze made himself laugh during his performance of Kiss’s “Beth” and he simply stopped singing stating, “You all know the song.”

As the lights faded away to Earth, Wind & Fire’s “September” and the night came to an end, it was a no doubter that the show provided true entertainment, even with those few issues.

While society will continue to trade jabs over which decade stands above all others, “Decades–The 70s” makes the argument that the 1970s, at the very least, was a decade of great music and fun.

“Decades – The 70s” will run through the end of October every Friday, Saturday, and Sunday. For tickets and information, head to www.offbroadwaylive.com. 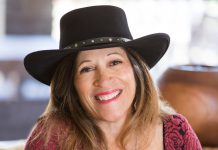 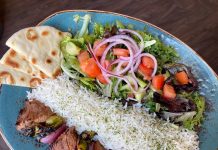