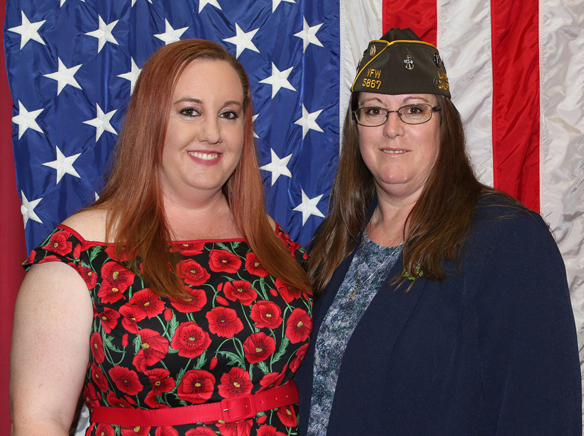 In this day and age, it is hard to believe that women veterans are still working so hard to accomplish firsts in this country. But Paula Jansen, a retired Navy chief, who witnessed the first women serving aboard ships and in combat roles, made two of her own firsts in Veterans of Foreign Wars history June 10.Jansen’s election as Post Commander of Carter-Smith VFW Post 5867 in Lakeside, make her the first female veteran to take the top spot in the 71-year history of the Post and when her daughter, LeAnna Brown, officially became the VFW Post 5867 Auxiliary President that same day, they may have both made worldwide history as the first-ever mother-daughter leadership combo at the top of a VFW Post.

According to numbers released by the Department of Veterans Affairs late last year, there are more than 21 million veterans in the United States, Puerto Rico and other territories. A little more than 2 million of those are women veterans. While significantly outnumbered, women veterans have been making significant strides in leading veteran organizations. VFW Headquarters in Kansas City keeps very detailed election reports, but according to officials there, it would be incredibly difficult to verify whether or not this is the first recorded case of a mother-daughter team in the top leadership positions at the Post level. Election Reports do not require gender identification, and the VFW and Auxiliary elections are held and reported entirely separately from one another. Therefore, this could be the first reported case in the world with the publication of this article.

But no matter what the impact is in the history books, this mother-daughter duo is more concerned with the impact they will make as they blaze their own trails for the VFW and Auxiliary.

“The possibility that my daughter and I may be the first to serve the VFW as the first mom-daughter team is exciting for us,” said Jansen, “but being history honestly falls a long second to serving our history by supporting our veterans.”

“I am so proud of my mom for being elected as the first female Commander of our Post,” Brown explained, “And I think that in itself is a huge step forward for our Post as an organization. “I think having and recognizing this kind of gender equality in our organizations shows younger veterans and their families that the VFW is a place that is evolving. We are a family-friendly organization that is not only helping veterans but inviting in all of those people that we hold most dear. What better way to show to everyone that the VFW is evolving as a strong family organization than a mother-daughter team supporting each other as we both work to support our veterans and our families.”

“We balance each other very well,” said Jansen. “We can be open and candid with each other and we know that our success will not be based on serving as a mother-daughter team, but as two leaders who are likeminded in accomplishing our goals.”

They have a lot of VFW leaders cheering them on as well. Deb Johnson, the first female veteran Commander of VFW Post 1468 in Bakersfield, Calif., and of California VFW’s District 6 said “My motto has always been that as women in a men’s organization that our actions, not our words, will propel us in this organization. A lot of people (male or female) will say a lot of things, but it is our actions that will be respected. I love that there is a mother/daughter duo leading a Post. This will inspire others and that is what the VFW needs.”

The Jansen-Brown duo are part of a family tree that has branches extending into all five military services and have roots that date all the way back to the Spanish American War. Jansen considers Fallon, Nev., her hometown and Brown was born in Misawa, Japan, but they both say that “home is where you hang your hat.” Little did they know in 2002 when Jansen retired that it may be a cowboy hat. They settled in a quaint little Western-themed section of San Diego County that epitomized “home” for them.

“One of the things that drew us to move to Lakeside after I retired from the Navy was the sense of community,” Jansen said. “Our VFW emulates what I saw in the community. Our Post is special in that we are very family-friendly and we will continue that and we will make more great memories for our veteran families.”

In the last couple of years, the Post has won All-State and All-American statuses and was named an Outstanding Community Service Post by VFW National Headquarters and awarded several state- and district-level awards. Jansen and Brown made enormous contributions to the efforts that led to these accolades. That was only the beginning according to Brown.

“I am not sure that the world is ready for what a strong-willed Navy Chief and her just-as-strong-willed daughter are capable of when they work together for a common goal. But, we are about to find out! Our first step in working together is creating a solid team with a common goal – ours will be ‘One team, one mission, to support our veterans.’ From here, the possibilities are endless.”