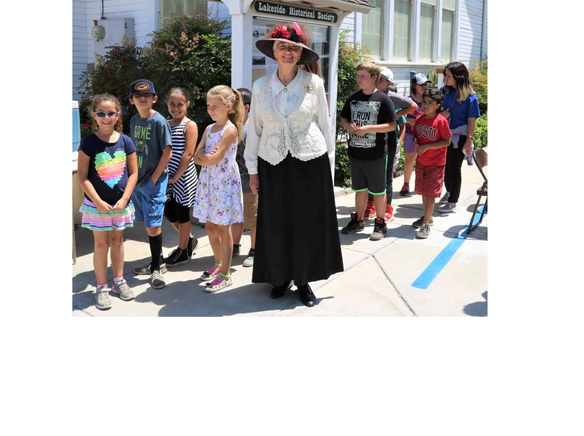 Lakeside third graders were treated with the annual Living History Days earlier this month, hosted by the Lakeside Historical Society. Over 500 students from four local elementary schools descended upon the Olde Community Church to learn about life in the old days.

Lakeside third graders were treated with the annual Living History Days earlier this month, hosted by the Lakeside Historical Society. Over 500 students from four local elementary schools descended upon the Olde Community Church to learn about life in the old days.

This was the 11th year the LHS has stepped up to present a valuable and popular lesson in local history. Over 40 members volunteer their time and effort for this three-day event. It is a fun and exhausting three days, with the reward being the smiles and enjoyment evident from the students who participated.

When the kids arrived, they were already pumped up – field trips are always so exciting. Lindo Lake and Lemon Crest schools were close enough so they could walk to the Olde Community Church; the other two schools were bused in. After lining up for the various exhibits, the students rotated through the ten different stations that each focused on a small piece of Lakeside history.

Students got hands-on experience in button sewing, braiding (something the boys weren’t all too keen on), doing laundry on an old washboard, and even milking a cow. The cows are wooden stand-ins, but each student learned about the process, using their hands to “milk” plastic bottles of water into a bucket. Whenever water is involved, a little spillage always occurs, which makes it even more fun for the kids.

Other exhibits included making a “button on a string” (an old fashioned game), watching volunteers sew and crochet and even use a spinning wheel, and seeing the Early Days Gas Engine and Tractor Association show off their fascinating collection of gas, oil, and steam engines. Students visited a 100-year old school room representation (complete with period desks, chalkboards, and a dunce hat); then they got a short lesson about historic old Lakeside, complete with actual photos of the old town.

By all accounts, the students enjoyed their experience and actually learned some stuff. The Lakeside Historical Society hopes to continue the program next year.

San Diego native and Lakeside Historical Society Founder Edna Swink Kouns celebrated her 103rd birthday on June 15! To honor her legacy and her community involvement, the Board of Supervisors proclaimed her birthday as “Edna Kouns Day” in the County of San Diego.

Edna is one special lady. Born in 1914 on 28th Street in San Diego, she has spent majority of her years right here in Lakeside. There was a brief two-year gap when her family had to move (very quickly) to Seeley, California. The reason? She was living in the El Monte Valley in January 1916 when the great rains supposedly caused by Charles Hatfield (the Rainmaker) flooded the valley. Edna remembers her father scooping up her and her newborn sister and loading them and their mother into a horse and wagon. They fled the raging waters as the family home was literally washed away.

Edna and family soon returned to the county. She graduated from Grossmont High School and then from San Diego State College. In 1936, she married Erman Kouns and they built a unique stone house on Winter Gardens Boulevard (then called Cajon Road). Edna still lives in the home today.

Edna was a substitute teacher for 50 years with the Lakeside Unified School District. She was a driving force behind the creation of El Capitan High School and was a founding member of their PTA in 1959. In 1972, Edna helped found another organization: the Lakeside Historical Society. She was also a key player in acquiring the Olde Community Church (built in 1896) and turning it into the home of the Historical Society. You can still find Edna there every Wednesday, where she loves to share the history of the community she so dearly loves.

On June 14, the Lakeside Library held their Summer Reading Kick-off with a visit from Sparkles the Clown. The room was packed as the kids laughed and generally had a good time with Sparkles, who preformed magic and bubble tricks.

The Reading by Design program was created to encourage kids, teens, and adults to read over the summer. You can still signup, either at the Library or online, and it is free. For every 10 books (or 10 hours of reading), you win a prize. There is a grand prize drawing at the end of August. There are weekly events to encourage reading and learning, as well as some great entertainment, such as the Shirthouse Bluegrass Band, who played to a crowded room on June 3. It’s a great time for kids of all ages and – did I mention? – It’s free!

Your Lakeside Library has a double bill on Saturday, June 24. In the morning, enjoy Native American Storytime at 11:00 a.m. Hear about how the jackrabbit got his ears. This theme can be heard on the last Saturday of the month through November. Then at 4:30 p.m., listen to the Celtic music of Adrienne Nims as she performs tunes from her album, “Lady from the Loch” on her saxophone. Both events are free.

Community-Lakeside Local Girl Scouts planting seeds — for now and the...