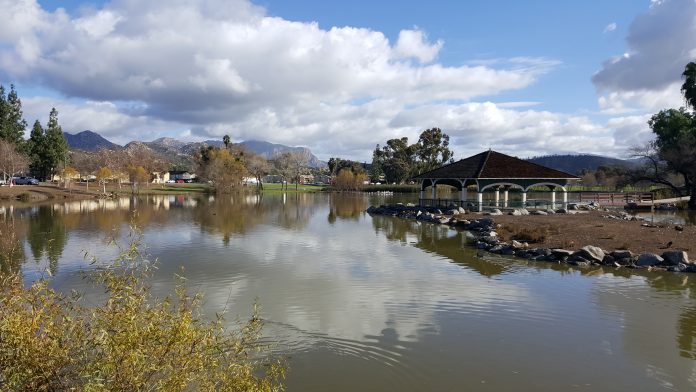 After nearly 20 years of input, discussions and plans, Lindo Lake – the “lake” in “Lakeside” – finally got the official approval to move forward with restoration and improvement plans.

Dianne Jacob, in whose district Lakeside falls, announced the decision on her Facebook page shortly after the vote on May 1, 2019. “My fellow Supervisors today joined me in voting to restore and improve Lakeside’s Lindo Lake,” she posted, adding, “An East County jewel is getting a new and much-needed shine!”

“I just want to emphasize that this is an extremely important project for the community,” Jacob said. “(Lindo Lake) is the centerpiece to the Lakeside community – and home of the Lakeside Community Center, the Lakeside Teen Center, two playgrounds, a picnic shelter, a ballfield, outdoor fitness station, tennis courts, and then the newest Lakeside Skatepark.”

The County has allocated $7.5 million to remove sediment, increase the lake’s depth, improve water quality and add amenities such as fishing piers and bird watching stations.

The Lindo Lake Subcommittee was key in the decision-making process. Established from Supervisor Jacob’s Lakeside Revitalization Committee in the 1990s, the subcommittee has been working on the project for the past 20 years. It has been comprised of local residents who have worked with the community and the county to figure out what might be best for the lake and Lakeside. Current Chairperson Janis Shackelford has led the group through a continuing process of seemingly endless ups and downs. A series of public input meetings dating back to 2013 have helped guide and craft the plan. The last such meeting was held in 2016.

The two-phase restoration starts in the east basin and is expected to begin before the end of 2019. Plans call for the deepening of the basin, so it will hold more water. Steps will be taken to improve water quality and keep out sediment (which will avoid the unpleasant odors that have often plagued that part of the lake in recent years).

Native habitat will be restored as well. Great care will be taken to ensure wildlife will not be compromised and construction will revolve around the nesting season. Completion is targeted for summer 2021, at which time Phase Two work should be funded and can begin in the west basin.

The 55-acre park was established by the county in 1920. It is located one block east of Lakeside’s Historic Downtown District. Often hailed as the only natural fresh water lake in San Diego County, Lindo Lake was historically filled by perennial creeks that flowed from the eastern mountains, though the lake probably did go dry during drought. Dams such as Lake Jennings have cut the natural flow of water into the lake, so that its primary water source today is urban and stormwater runoff from the surrounding hills and neighborhoods. A series of three wells also supplements the water level, though the east basin runs dry by summertime.

The new plan calls for water to be maintained in both basins year-round.