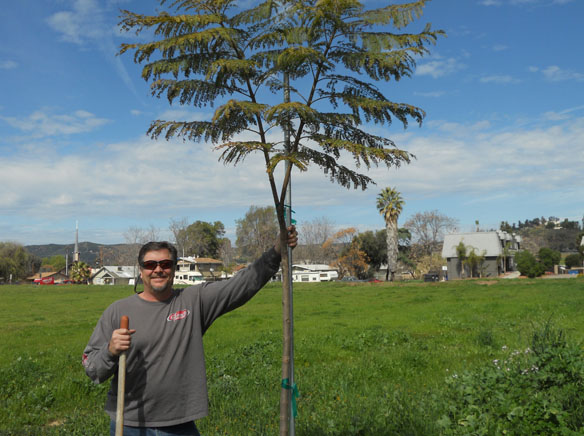 Arbor Day is just around the corner, in mid-March. Most folks don’t know what that means, but in East County the Mile of Trees- Lakeside is trying to bring it back by planting more trees in the community, and they hope to create an urban forest in this hot, dry climate.

Arbor Day is just around the corner, in mid-March. Most folks don’t know what that means, but in East County the Mile of Trees- Lakeside is trying to bring it back by planting more trees in the community, and they hope to create an urban forest in this hot, dry climate.

Two years ago the Mile of Trees enlisted the help of AmeriCorps to plant 25 jacaranda trees along Woodside Avenue in a vacant lot across the street from the Vons supermarket. The Lakeside Garden Club donated $400 to purchase trees and fertilizer. The Mile of Trees purchased small five-gallon trees, only three feet tall, with the hope that they would grow really fast. The weeds were taller than the trees.

Volunteers would water by hand using one-gallon jugs which they hauled over to the field in their cars and trucks.

Along came Chris Mudd, volunteering to help them water. After only one experience of watering the “old fashioned way,” he decided to purchase a 150-gallon water tank which he could put in the back of his truck, he even filled it with his own tap water from home to haul to the site. After he received his water bill he quickly decided that he would take me up on my offer to fill his tank at my home water well.
The little jacaranda trees seemed to be taking well to their new home until the gophers saw them and decided their roots were very tasty. Those darn gophers killed several precious little trees.

Dutifully, Chris and another volunteer, Billy Ortiz, dug up each and every tree and put metal wire cages around the roots and then carefully replanted them all, replacing the dead ones too.

It was a labor of love, but with the help of a generous dose of fertilizer, those little trees took off growing and in only two years are tall enough for folks to see them over the berm while driving along Woodside Avenue. Some of the trees are well over eith feet tall now, but some that were hit hard by the winter freeze are struggling to survive and make a come back.

Chris is getting ready to retire from watering the trees and Mile of Trees is hoping another volunteer will step forward to help with watering once or twice a week during the hot summer months. He is even going to donate his water tank to the cause.

Chris said he comes in the evening when it is a little cooler and enjoys seeing a large owl coming out to catch its evening meal of gophers and rabbits. His dog keeps him company and enjoys romping in the field too.
Most states celebrate Arbor Day by having school children plant trees. The Lakeside Historical Society has an old photo, circa 1900, showing trees that were planted along both sides of Woodside Avenue, the year was 1893.

Ninety-eight-year-old Eileen Carender recalls that those trees grew to create a complete canopy over Woodside Avenue and it was a cool, shady walk for her during Lakeside’s hot summer months.

If you or your organization would like to help plant trees or water them, call the Mile of Trees co-chairman Gail Sabbadini at (619) 443-7166.

If you have any Lakeside-related items which you would like to include in The East County Californian, call Betty McMillen at (619) 443-1133.

‘The Rose Lady’ of East County, helping women in need, one...

Exercise-based treatment for osteoporosis an option for patients