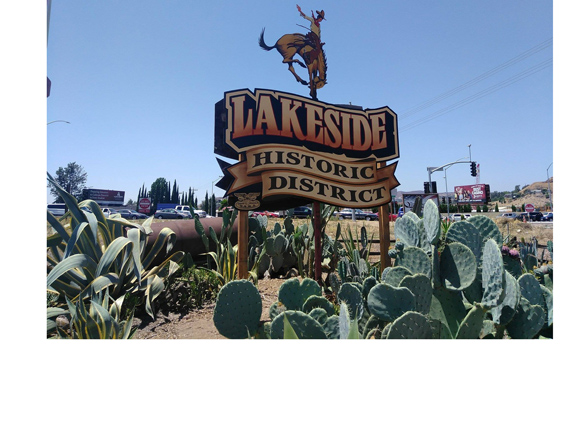 Lakeside got his groove back, now that the historic district sign is freshly renovated and reinstalled in Cactus Park, right when you enter the town off State Route 67 on Mapleview on your way to the Rodeo Grounds on the left. The whole process took a year and a half, but the actual story on how Lakeside got his sign is few decades old and quite fascinating.

Lakeside got his groove back, now that the historic district sign is freshly renovated and reinstalled in Cactus Park, right when you enter the town off State Route 67 on Mapleview on your way to the Rodeo Grounds on the left. The whole process took a year and a half, but the actual story on how Lakeside got his sign is few decades old and quite fascinating.

Did you know that Lakeside, during the good old days when actor Lorenzo Lamas used to ride his motorcycle up and down Maine Avenue and Moreno Valley during the shooting of the TV show “Renegade”? The show was produced by Stu Segall, a local production company who also paid Lakeside Historical Society $500 per day back in 1995 to allow the filming crew inside. What does the “Renegade” show have to do with Lakeside Historic District sign though? A lot.

To make up for all the interruptions to the local businesses when the production crew had to close down roads and change up many buildings facades for different shows, Segall ordered a sign for the town as sign of appreciation. Betty McMillen, president of MARA (Maine Avenue Revitalization Association), has been working tirelessly for decades to renovate the old buildings in the Lakeside historic district on Maine that ends on Mapleview. McMillen remembers how she asked Segall to use a belt buckle as a model for the sign. The belt buckle was made out of pewter by an artist to celebrate Lakeside Historical Society centennial in 1976. And so, Segall obliged and the town entrance was adorned with this beautiful carved wood and hand painted sign showing the boat house of Lindo Lake, cowboys, mountains and valleys, all in good faith for the very nice people of Lakeside.

“Lamas was a very young and popular actor, very handsome, but really shy and he would come into our Historical Society building asking to use the restroom and we were all like, let’s put a sign over the toilet, ‘Here sat Lorenzo.’ People came from all over Lakeside to watch him and the filming on Maine Avenue and we all thought this is fun and exciting, but for the people who tried to run a business around it was very hard,” she said.

The Renegade sign lasted about a decade before starting to fall apart and McMillen thought to order a bigger and sturdier sign from a beloved local artist, David Ybarra. She stored the Renegade sign at her house, repainting it several times to preserve its luster and planning to use it on a different building in the old district later on. Ybarra lived in Lakeside most of his life and he has been painting signs and buildings around town for almost 40 years. You can see his beautiful murals on most of the buildings on Maine Ave and surroundings. He has a mountain named after him on Willow Road in El Monte Valley as he was “the first to buy a house around here in 1955 when there was nothing around, but open space. My aunt, she looked at the mountain and thought it looks like me and said, this should be Ybarra Mountain.”

Ybarra created a new sign, much taller, done in heavy metal and hand painted, beautiful lettering stating Lakeside Historic District with a cowboy on top, looking as if he just ran out from a real life ranch scenery, all too common around rural Lakeside.

Another decade or so went by and Ybarra’s sign faded out. The old wooden pillars supporting the heavy metal sculpture lost the battle against wind, water and, frankly, old age. One day in April last year, few members of the community mobilized and took the whole thing down. Bob Turner of Bob’s Crane Services volunteered to pull up the heavy metal sculpture using his machinery for free and set it securely on the ground for safe transportation to Ybarra’s studio to be repainted, refastened and re-loved. Turner said, “I have known Betty McMillen for years and I am always happy to help her out. I lived in Lakeside since 1968 and had my business here for thirty two years and I am always happy to help anybody in Lakeside who needs help.”

Carl Constantino, Ralph McMillen, Steve Robak and a homeless gentleman were among the ones helping Turner with the demolition. The sign travelled safely to Ybarra who took precious time to meticulously recreate the same exact colors initially used for the his sculpture showing a cowboy trying to tame his horse, right hand high up in the sky, hat miraculously still on, red bandana tight on his neck, but with the horse not quite ready to give it up yet, to come down from his mighty pedestal and start roaming through the valleys and the mountains of Lakeside at steady pace.

McAlister Institute founder counsels on sobriety issues during the holidays