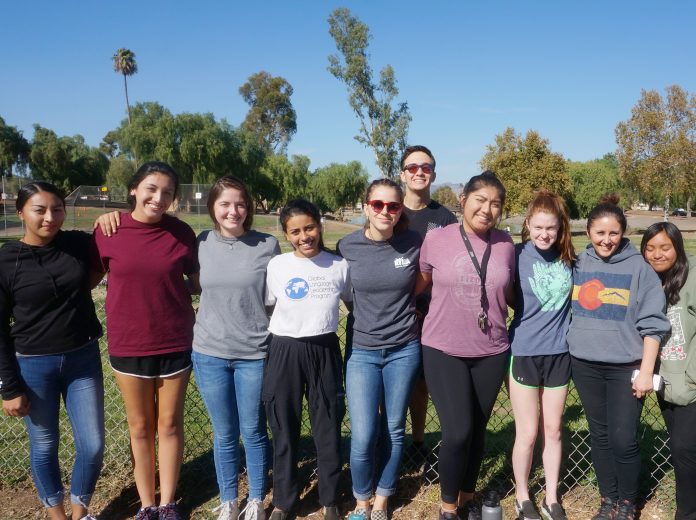 In the Nov. 28 issue of the East County Californian, information regarding the sale of the Calvary Ranch site was published in error.

The property is still available for purchase. The asking price is $1,370,000, but at this point there are no accepted offers, and the property is being actively advertised and shown to prospective buyers.

In the Nov. 28 issue of the East County Californian, information regarding the sale of the Calvary Ranch site was published in error.

The property is still available for purchase. The asking price is $1,370,000, but at this point there are no accepted offers, and the property is being actively advertised and shown to prospective buyers.

The students are part of the Global Leadership and Language Program, a year-long elective course offered for seniors at El Cap. Noemi Herrera is their instructor, who describes herself as more a facilitator and coach than a teacher.

“The students take the lead in discussion and selection of their themes,” she said. For this particular project, the students started big, talking about worldwide issues of pollution and garbage. These ideas eventually led to a focus on community and a way to better it. That is when they connected with MARA – the Maine Avenue Revitalization Association.

Betty McMillen co-founded MARA in 1992 and continues to guide the low-profile organization. The nonprofit is dedicated to helping Lakeside to “revitalize” the downtown business district and maintain its historic fabric. Their projects are small but effective: funding for painting, signage, façade improvement, and even art in the form of historic murals.

MARA was a perfect match for the El Capitan seniors.

Betty met with the El Cap class on campus and discussed a number of ideas in which they could collaborate. During a brainstorming session, the group learned that Betty had a number of young Jacaranda trees available, part of a project to plant more trees in Lakeside. The Jacaranda is a drought tolerant tree with a beautiful purple flower bloom. With Betty’s blessing, the students decided to plant those trees.

The students then contacted the rangers at Lindo Lake Park, who gave the OK to receive the trees. In fact, park rangers were planning on taking out a few older pepper trees and adding some color to the park, so the Jacarandas were a perfect fit.

On Nov. 16, the students arrived at Lindo Lake Park, ready for work. They teamed up in groups of twos and threes and planted the eighttrees around the baseball field at the southwest area of the park. Betty was on hand to support and document the effort.

The project took most of the afternoon. Though none of the students had ever planted a tree before this day, there was no trepidation or lack of enthusiasm. With help and guidance from the lake rangers and staff (for placement and digging of the holes), the seniors from El Capitan completed their task. The fact that their work will be seen for a long time to come was not lost on them. Students Kaya Anders and Sophie Jensen actually named their tree, “Cindy Lou.”

Kaya reflected that she will be able to visit “Cindy Lou” for years to come, as it grows into a big beautiful tree with those purple flowers. It was something to look forward to.

There may be new life coming to an old recovery facility that closed earlier this year.

After 47 years of service in Lakeside, the Calvary Ranch closed its doors in August 2018. The eight-and-a-half acre site, located on Willow Road east of Ashwood Street, was and founded by Tom and Paulette McAloon in 1975. Now comes word the Foothills Church of El Cajon plans to reopen the ranch, with an eye toward helping the local homeless population.

Pastor Kevin Miller addressed the Lakeside Community Planning Group on Nov. 7 and announced the church was looking at purchasing the property for $1.37 million. Their plans call for a bridge housing program – doing much the same thing the Calvary Ranch was doing – for up to 25 people at a time. Miller noted the area is zoned for group care and that this new program would fall directly into that category.

More specifically, the idea is to offer services to the area’s homeless, who would gain access through some type of referral service (yet to be determined).

Once vetted, the client would stay up to 120 days. Services would be rendered to get people self-sufficient and back up on their feet.

Pastor Miller added the new plan had support from Lakeside’s River Park Conservancy and others in the community. He promised to come back to the planning group with more information in the near future.

The Foothills Church of El Cajon is located at 365 West Bradley Avenue in the City of El Cajon.

The Woman’s Club of Lakeside was established in 1910, making it one of the oldest community groups in the region. It is also one of the most active and generous organizations in town. The money they raise goes right back into the community. Case in point:

At their annual Bunco fundraiser in September, the Club raised funds for three separate $2,500 donations. The recipients this year were the Maine Avenue Revitalization Association, the Lakeside Fire Department Logistics Volunteer Group, and the Local Fire Safe Council.

Congratulations to those worthy organizations and many thanks to the Woman’s Club of Lakeside for their support.

It is more than business with CKO Kickboxing’s grand opening, it...