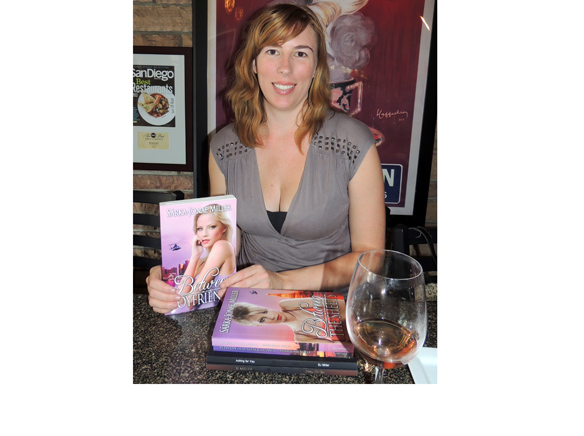 A published author of five books, Lakeside resident Sarka-Jonae Miller put people at ease at her launch event of Ask an Author, based on her column of the same name in East County Magazine.

At Bistro Sixty in La Mesa, she discussed her writing career and her two series of books, “Between Boyfriends” and the new “All for You,” published by Seattle-based Booktrope.

A published author of five books, Lakeside resident Sarka-Jonae Miller put people at ease at her launch event of Ask an Author, based on her column of the same name in East County Magazine.

At Bistro Sixty in La Mesa, she discussed her writing career and her two series of books, “Between Boyfriends” and the new “All for You,” published by Seattle-based Booktrope.

Miller’s vivaciousness resembles the twenty-something young women she portrays in her romantic comedies. But that’s about as far as the similarities go.

Her books, which are a sub-genre of chick-lit, are often about women whose identities are too wrapped up in men.

“My character Jan in “Between Boyfriends’ is super-annoying, one of those boy-crazy girls,” said Miller, who also runs a boutique PR firm called SJ Publicity.

Jan finds herself alone without a man for the first time in her life when her boyfriend dumps her on the phone while he’s sitting outside the Love Library at SDSU. She realizes she’s been totally self-destructive and says she’s done with it all. She’s been a relationship addict, but does not have a lot of friends, Miller explained.

“So Jan has no man and no money, but she figures out her priorities and goes back to school. The novel is a coming-of-age story, very empowering for women,” Miller said.

“Between Boyfriends” garnered a review from the San Francisco Review Magazine, which Miller likes to quote: “a refreshing modern Cinderella tale were she throws out her glass slipper and rescues herself.”

However, Miller does not hold a negative attitude towards women being in a relationship with a guy. She has a boyfriend now, in fact, and she has a funny story of her own about being between boyfriends.

During her freshmen year of college, Miller was driving to her boyfriend’s house on Valentine’s Day when she hit a patch of black ice. She slid into a curb, totaling her car. She was not injured but had no cell phone and she was shaken up. Since she was only about a block from her ex-boyfriend’s house, and as a last resort, she walked there to ask to use his phone to call her new boyfriend. But he still had great feelings for her, which became quite clear when he opened the door to her.

“I got my first cell phone very soon afterward and my ex found a new girl not long after that as well, so happy endings all around–except that I’d totaled my first car,” Miller said.

From the time she was a little girl, Miller has been a serious writer. When she was about seven years old, her schoolteacher assigned the students to write two pages.

“But I wrote countless pages. My teacher just looked at me, looked at my work and said, ‘You should be an author,’” Miller said.

Those became the magic words for Miller. “I always wanted to be a journalist, so that I could interview pop-stars,” she said.

Having grown up in San Diego, Miller went to college at Syracuse University because, for one thing, she thought it would be a unique experience on the East Coast.

“Oh, it was all right, but I couldn’t stand the winters. I came back to San Diego as soon as I could,” she said.

But first, she landed an internship as a contributing writer at Post-Standard in Syracuse. Miller has always been determined to meet deadlines, no matter what came up. Case in point, on her 21st birthday, when all of her friends were gone on spring break, Miller volunteered to work since it was a beautiful spring-like day in March. She rollerbladed to the office, but unfortunately, she got hit by a car on the way. Since she had been taking karate lessons, she knew how to fall correctly, avoiding a major injury.

“Now, I could have hobbled back to my house or accepted a ride to the hospital, but I was on deadline, so I tied my rollerblades together by their shoelaces, slung them over my shoulder, and walked to the office to turn in my story,” Miller said.

Once back in San Diego, Miller began her adventure with writing fiction. She had gotten the idea for “Between Boyfriends” novel during her junior year.

“Writing the book took me five years. I write when I feel like it. If it’s been awhile, I’ll go back and read a couple of chapters and that gets me going,” said Miller, who prefers to write in the evenings.

“Whatever works is my official motto,” she said.

On her continued book tour and Ask an Author talks, find out more about how Miller works and writes successfully. Upcoming events in East County include July 18 at the Casa de Oro Library and July 26 at Santee Barnes’ and Noble. Check the schedule and read her blog at www.sarkajonae.com.