“We’re very excited to come forward with this,” Simonds said.

The state’s Department of Conservation administers the Sustainable Agriculture Lands Conservation Program which was created in 2014. The program’s principal goals are to protect at-risk agricultural lands from development by promoting growth within existing jurisdictions, to ensure that open space remains available, to support a healthy agricultural economy, and to avoid increases in greenhouse gas emissions associated with the conversion of agricultural land to more intensive non-agricultural uses. Grants are awarded annually each December, so the next grants will be awarded in December 2022, and funding is for a two-year period. In December 2020 LAFCO and the Resource Conservation District of Greater San Diego were awarded a $250,000 grant to develop and implement plans for the protection of agricultural lands at risk of conversion to more intensive non-agricultural uses.

The current grant application would generate market information and best practice data to support and sustain agriculture in San Diego County with a focus on aiding small-scale farming operations. “It would include some cost-benefit analysis on some specific crops and emerging crops here in San Diego County,” Simonds said.

The county’s Department of Planning and Development Services would partner with LAFCO on the grant. The ten percent local match requirement, which can include staff time costs, would be evenly split between the two agencies. 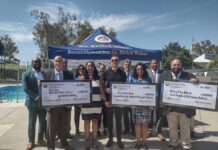 Season of giving should not be season of scamming