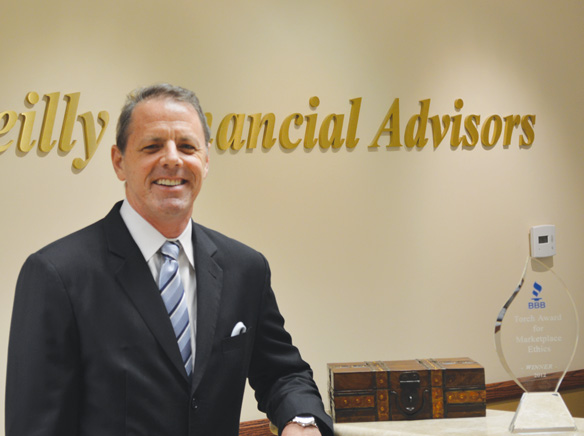 Honesty, truthfulness, reliability and caring are not common words associated with investment firms, especially in the after wake of recent year’s scandals of Bernie Madoff and other large corporate financial giants. But, a wealth management firm, based out of La Mesa recently won three esteemed awards for those qualities proven a successful business model for both its clients and employees.

Honesty, truthfulness, reliability and caring are not common words associated with investment firms, especially in the after wake of recent year’s scandals of Bernie Madoff and other large corporate financial giants. But, a wealth management firm, based out of La Mesa recently won three esteemed awards for those qualities proven a successful business model for both its clients and employees.

Frank Reilly, president of Reilly Financial Advisors said receiving all three of the awards was something he did not expect and said it was nice receiving the fastest growing was nice to see that they were having success, but that the best place to work was much more gratifying. He said he did not think they had a chance at winning the Torch Award, but that going through the process was a learning experience and would help set them up in the future.

“When they called our name, I was very surprised,” said Reilly. “And again, very gratified that all of what we do is working and going the right way. An outsider came inside and gave us the Torch Award based on our ethics. You don’t have to say much about financial services since 2008 and know that it is not exactly known for ethics.”
Reilly attributes the success of his family-owned business to core values that were set up in 1999. He said he began working with his father in 1975, right out of undergraduate school with Americans that worked in Saudi Arabia that began with the simple asking of friends of the family that had gotten work there and earned good money for the first time in their lives. With a 10 year break, working with LPL Financial in San Diego as vice-president for special projects, he and his father decided to join forces again, taking what they had learned and done for Americans working abroad and doing the same in the U.S. The official formation of Reilly Financial Advisors came in 1999 and they started building out the business in San Diego, he said.

Certain things in the business we wanted implemented from the beginning, he said. First was to get out of commissioned based transactions to the investor advisor side where you charge a fee and it does not matter what you buy or sell.

“We like that because it puts us on the same table as the client in terms of what is best for them, it takes away the conflict of which side you are on,” he said. “At the same time we didn’t want to just help them with their investments. We wanted to help them with retirement, setting goals, tax issues, integrate with their estate planning attorneys, will, trusts, what do you want to accomplish and how all that works.”
He said at the same time, many of them had experiences at places that were not a good environment to work in.
“We wanted to build the type of firm that we would want to work at,” he said. “In terms of how employees are treated, part of the decision making process and feeling like they are in a partnership. So it was a two-pronged approach-what is best for the client and how do you keep good, happy employees.”

Christina Dodge, director of marketing and special projects worked with the company beginning in client services. Charged with the responsibility of the award entries along with her normal responsibilities in on-client communication, creating materials for prospects, clients, centers of influence, sales, website and social media maintenance, she said the special projects is a “catch all” in doing whatever it takes in helping the firm with what it needs to ensure it reaches the next level.

“Anything it takes to make sure we are constantly building a better company and helping our clients,” she said. “I would never put the time and dedication into something I do not believe in. It’s an amazing company, we just keep growing and it is a great place to be.”

Reilly believes the company’s four core values made them continue to succeed in today’s rough economic times.
“Honesty, truthfulness, reliability and caring, they are something that never changes,” he said. “What was true in 1999 is true in 2013 and will be true in 2025.”

Reilly said the honesty part is that they are not Bernie Madoff, putting things in place that make it impossible for them.
“All the money entrusted to us is held at TD Ameritrade or Charles Schwab,” he said. “They only give us the ability to do trades in the accounts and to take our fee.”
He said being truthful is more important by telling clients the truth about their financial situation.

“We are asking about their goals, not just managing their money,” he said. “It’s about their retirement, investments, sending their kids to school and sometimes we have to tell them they cannot afford that. It is our responsibility to let them know and we will not hide it from them.”
Reliability is getting back to our clients quickly, and it has created schedules in getting in touch with clients on every aspect of their business before they feel a need to call and ask. He said the easiest way to explain caring about the clients is the challenge he gives to all employees.

“I ask every single employee to think of every single account as their parents,” he said. “This is your mom and dad’s money, this is the money they are going to retire on. This is what we do, what we live every day. We want a firm that offers the best services to our clients and the best careers for our employees.”
Reilly Financial Advisors is not about complete control, but wealth management. It has brand offices at TD Ameritrade and Charles Schwab and is very active in most western states. It helps manage clients in 40 states and 115 countries, many of those retiring out of Saudi Arabia. He said although that is where the business originally began it is now less than a third of the company’s business.

“Our understanding of how to do business with clients that are physically dislocated makes it really easy for us dealing with clients that are right here,” he said. “We want to be able to integrate how much returns and risk they are getting in their financial plan, help them accomplish their goals and how they do it. We want to be their financial partner.”