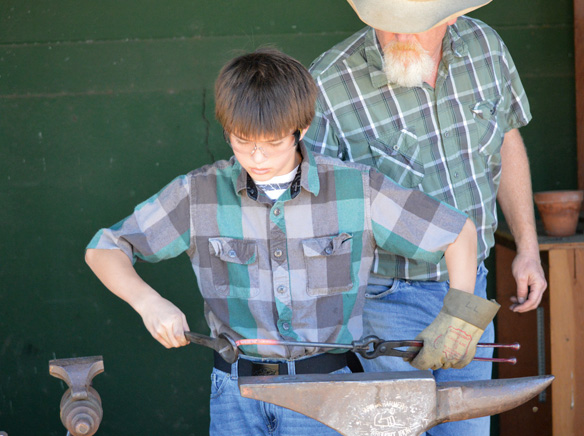 With a rich history, from a national renowned dairy farm to the current museum and home of the Santee Historical Society, hundreds of people gathered Saturday at Santee’s Edgemoor Barn’s 100th birthday.

With a rich history, from a national renowned dairy farm to the current museum and home of the Santee Historical Society, hundreds of people gathered Saturday at Santee’s Edgemoor Barn’s 100th birthday.

Kids played ring toss, go fishing, pin the cow to the bell and many games of old, while others reminisced looking at the pristine antiquated cars, tractors, toys and farm equipment out on display, most in working order. Touring the museum, artifacts of every era of the barn’s history of farming, home for the indigenous and geriatric hospital were guided by members of Santee’s Historical Society, all dressed in era fashion. Topping the afternoon off, the event held a donut-eating contest, where the prize was—more donuts.

Arli Wolfson, Santee Historical Society secretary said Walter Hamline Dupee purchased Edgemoor Farm in 1913 and built it into a national award-winning dairy farm and partial home to the polo pony ranch that he later moved to Coronado. She said it is often mistaken as the Polo Barn, but originally housed his prize bulls.
“This was a working barn that in the early 1920s that became an indigenous poor farm for people that could not afford to live elsewhere,” she said. “It then became the Edgemoor Geriatric Hospital or the hospital of last resort taking in patients that no other hospital wanted to take.”

The official Cowles historian himself, retired teacher Steve Haiman’s alternate persona is George Cowles, who arrived in Santee in 1877, settled and built two ranches and found himself focusing his farming with grapes. Haiman gathered crowds of people and told them the rich history of Cowles investment in the city, his work with the banks and railroad to transport goods making the city the link to the Cuyamaca railroad.

“Now the only thing that bears his name is Cowles Mountain,” he said. “Many investments and work he did he never saw while he was alive, like the city’s first post office, Cowles School district and Cowleston’s first school.”
After building the new Edgemoor Hospital, the only building from the Dupree era was the barn.

Wolfson said that the event not only celebrated the 100th birthday of the barn but in future years, a celebration for Santee Heritage Day.

Santee resident leads the way on walks around town