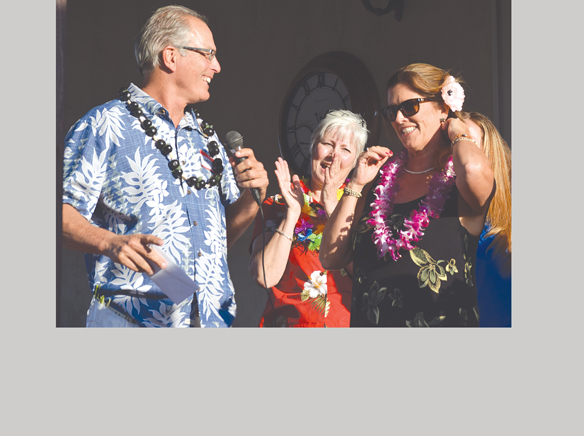 Since 1949, the La Mesa Lions Club has served the city of La Mesa and beyond with its sundry of philanthropic ventures. Being the second largest Lions installation in the county, the La Mesa Lions indubitably provide services and time in service of the community.

Since 1949, the La Mesa Lions Club has served the city of La Mesa and beyond with its sundry of philanthropic ventures. Being the second largest Lions installation in the county, the La Mesa Lions indubitably provide services and time in service of the community. Along with special projects and large fundraisers, the Club continuously participates in the Lions in Sight Project (providing eyeglasses for the underserved), does yard work at Sharp Hospice Care’s LakeView Home, holds the Lions Student Speakers Contest, Sponsors the Lemon Avenue and La Mesa Dale Elementary Schools, participates in the Lions Youth Exchange, holds blood drives and collects hearing aids and books for the disadvantage. And that is just a sampling of what this organization does on a daily basis. Over the 2015-2016 year, the La Mesa Lions allocated nearly $16,000 to charity. Forty percent funded youth, 34 percent supported health and human services and 20 percent allocated to vision related agencies.

At one of the member’s beautiful homes overlooking the hills of La Mesa, the La Mesa Lions Club, with a full luau Hawaiian feast, held its annual Installation &Awards Dinner on June 25.

Immediate Past District Governor Mary Rynearson gave pins to installation members for service and longevity, and installed the new officers for the 2016-2017 year.

As one of her last acts as president, Past President Beth Morgante presented awards to members including the Dwight E. Stanford Award, Melvin Jones Award, Earnie Shaw Lion of the Year and President’s Awards.

Misty Thompson, taking on treasurer for another year, received the Melvin Jones Fellow Award for humanitarian services and the President Recipient Cup. Morgante said that it is a difficult decision, but the choice is for outstanding service throughout the year and how much her work did in relieving many of the duties as president.

Dave Shaw said Morgante came through as president and stepped in and got the job done. He said he was president 31 years ago, and it is a privilege to serve as president again.

“Many of you know that I grew up here because of my father. I was going to the La Mesa Lions’ softball games, I was their bat boy at 5, so the La Mesa Lions is in my blood,” he said. “We are going to have a very busy year, so you better be ready. We’re going to have a lot of visitations, service projects, a lot of fun, and this is going to be a great year. We have the momentum because of Beth, and we are just going to keep this going.”

Shaw said he would like to see 100 percent attendance rate among the members, increase the Lions visibility in the community of La Mesa. “We are going to show them what we do in the community,” he said.