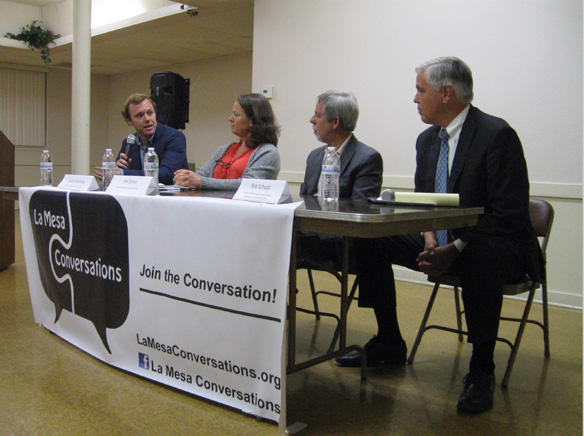 Before the La Mesa Conversations’ event began at the La Mesa Masonic Lodge on March 23, it was not really clear what would be covered. As long time La Mesa resident Joe Glidden observed, the event’s description, “The Future of Transportation in La Mesa,” was a little vague and he said he was not sure what that meant. As it turned out, the panelists focused on two forms of transportation: multimodal and public transit.

Before the La Mesa Conversations’ event began at the La Mesa Masonic Lodge on March 23, it was not really clear what would be covered. As long time La Mesa resident Joe Glidden observed, the event’s description, “The Future of Transportation in La Mesa,” was a little vague and he said he was not sure what that meant. As it turned out, the panelists focused on two forms of transportation: multimodal and public transit.

Early on, attendees learned Espinoza’s initial comments that she uses different (multi) modes of transportation during the week. Some work days she commutes by conventional or electric assisted bicycle. On other days she travels by either public transit or car. For transportation, multimodal refers to pedestrian, bike, public transit, and the ever present personal automobile. These early comments set the stage for the observations covered that evening.

Speaking to the unique southern California automobile environment, Stone offered “cars have been well taken care of in our world.” Case in point: our freeway and roadway systems. Accompanying, or perhaps because of these systems, is a culture in which we expect to be able to drive our personal vehicles from point-to-point. Citing that the destination is most important in this culture, in our car centered culture, people want to walk a minimum distance from their car to the store, doctor’s office, etc.

The panelists offered that this cultural element conflicts with greater utilization of public transit, for example, as people have an expectation described as door-to-door transportation options. Different from walking to a trolley or bus stop, taking public transit to a stop near their destination, and walking to their office, store, etc. Walking just is not as prevalent here as it is in Europe, with Stone indicating that in America people will walk about one-quarter of a mile, while in Europe it is one-half mile.

This cultural aversion to walking came up again when the panel addressed questions from the audience. One such question asked about the lack of parking La Mesa in support of local businesses. Stone, a La Mesa resident who most days makes his commute by public transit, perhaps boldly stated that there is plenty of parking in the downtown area, if people are willing to “walk three minutes.” Keatts added that it is interesting people complain about walking distances from available parking, yet are willing to walk much longer distances at Disneyland, popular shopping malls, and other venues. For some reason, the car culture manifests as an unwillingness to walk any distances, contributing to what was described as resistance to using public transit.

Another audience comment addressed one more reason for the resistance to using local public transit, specifically mentioning the MTS Trolley system travelling through some areas that can politely be described as troublesome. While acknowledging the concern, Schupp offered that MTS is working on overall customer service. As part of this effort, he described an initiative to provide a mobile ticketing capability with a smartphone application that can be used to pay for fares. This new approach will make it much easier to ride public transit, because riders will not have to deal with the sometimes-confusing ticketing process.

In reference to ticketing, Schupp said it is far cheaper to use public transit as well as being better for the environment. The panelists and moderator joined in, citing other benefits the rider accrues from using public transit. Transit riders are less stressed during their commutes, being able to read, relax, do a crossword puzzle, converse, or work. And they are not contending with the rush hour traffic, only to arrive at work or home with elevated blood pressure and sour moods. Stone reminded the audience, “the next time you are stuck in traffic, remember, you are the traffic.” A self-professed avid user of public transit, Stone added walking to and from transit stops is part of a healthier lifestyle. Espinoza contributed comments about the health benefits of cycling over driving.

In discussing the future, Espinoza commented on reaching a future cultural tipping point. As the area’s population grows, already crowded freeways will become even more crowded. When it ultimately becomes too hard or costly to drive, people will seek alternatives, including public transit. Schupp described efforts to prepare for that future, including the Purple Line from San Ysidro to Sorrento Valley making it easier for the businesses there, including Qualcomm, to recruit employees, since they would not have to contend with the acknowledged horrible rush hour traffic on I-805 and I-5. The reference to the future rush hour traffic led to comments regarding the future environment.

The audience was informed the San Diego Climate Action Plan seeks to cut in half the use of private cars, the greatest source of pollution, by 2035. It is envisioned this will be achieved by 50 percent of people walking, cycling, or taking public transit for their daily commutes. This would, of course, require that significant change in mindset, as cited by all the panelists. In addition to a change in mindset, it may become a requirement for many of La Mesa’s residents.

Noting La Mesa’s aging population, Schupp addressed their needs, particularly when they can no longer drive and public transit will be crucial in their futures. Reinforcing his other comment about the fiscal benefits of public transit, he highlighted that a senior MTS pass costs only $18 per month. Of course, for greater utility, public transit must go where the people need to go. So space utilization and urban planning must take into account these needs when planning transit corridors. And, as was noted when describing the extension of the trolley line from Old Town to UCSD and UTC to address needs, it comes at a cost. In this case, it is an estimated $2 billion.

As Espinoza had observed, as the local population grows, roadway congestion increases. The panel’s view of that future of transportation in La Mesa is heavily multimodal, including increased use of public transit. To realize that future will require the change in mindset the panelists addressed throughout the event, in order to alter the current car centric culture.