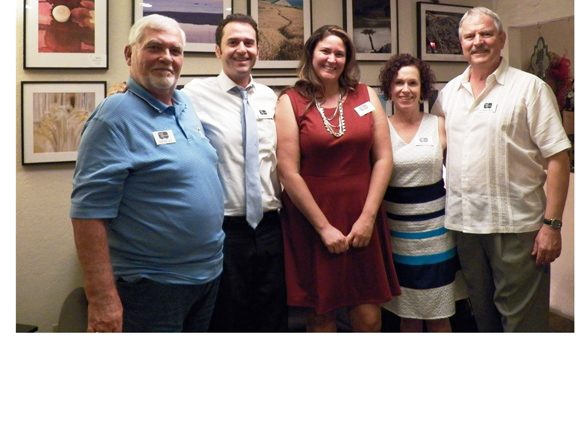 Is water a dry subject? Not to the panelists and East County residents who attended the first program hosted by the newly formed civic engagement organization La Mesa Conversations, which was titled “The Future of Water in La Mesa.” La Mesa Conversations (LMC) kicked off its efforts of bringing experts to discuss timely topics with interested La Mesans on Sept. 23. This first of a series of planned monthly meetings was held at San Pasqual Winery in the Village on La Mesa Boulevard.

Is water a dry subject? Not to the panelists and East County residents who attended the first program hosted by the newly formed civic engagement organization La Mesa Conversations, which was titled “The Future of Water in La Mesa.” La Mesa Conversations (LMC) kicked off its efforts of bringing experts to discuss timely topics with interested La Mesans on Sept. 23. This first of a series of planned monthly meetings was held at San Pasqual Winery in the Village on La Mesa Boulevard.

Dexter Levy, a La Mesa Planning Commissioner and founding committee member of LMC, delivered opening remarks and introductions. Moderator of the brief panelist presentations and discussion was Ry Rivard, who covers water and energy subjects for Voice of San Diego.

Local water supplies experts on hand were Carlos Lugo, general manager, and Mark Umphres, director of water quality and system operations, both of Helix Water District. Lani Lutar was there as president of Responsible Solutions, Inc., to tout the benefits of adding “potable reuse” water into supplies, which had formerly suffered public rejection when known under the unsavory label of “toilet to tap.” Rounding out the quartet of panelists was John Bolthouse, executive director at Cuyamaca College’s Water Conservation Garden.

The short answer of greatest importance came early on in Lugo’s presentation. He told the audience that the area indeed has enough water now, that local agencies already have 99 percent of the water needed for next year. However, he continued ominously, that the drought and inadequate supplies affecting other regions in California, taken together with the governor’s “broad brush” mandate, will mean that cutbacks in use and expensive bills will hit La Mesa residents anyway. All the panelists agreed later in the discussion, though, that East County is very “well positioned” water-wise, among other parts of the Golden State.

Under the statewide mandate, San Diegans were required to reduce water usage by 16 percent. The county exceeded that reduction goal by double digits.

Lugo provided other intriguing details about water supplies and planning. A gallon of tap water currently costs under a penny. In the Helix Water District, which serves roughly 270,000 people in La Mesa, El Cajon, Lemon Grove, and around Padre Dam and Lakeside, each Helix area water user averages use of 26 units of water every two months and can expect an increase of $12 in the bill from the cost of new water supplies. (An acre-foot is the amount of water that would cover a football field one-foot deep, and 435 units make up an acre-foot, which would supply two families of four all the water they need for a year.)

Water agencies take a 30-year outlook, updated every five years based on current demand and projections of growth, according to Lugo. The Helix area is 90 to 95 percent built out, so that little future development is envisioned to tax existing water supplies and sources.

Lutar emphasized the comparative prices and expenses for water from different supplies. “Conservation is the cheapest water source,” she declared. She said that the San Diego County Water Authority has new water sources coming in, in transfers from Imperial farmers and in desalinated water. She described imported water, such as from the Colorado River, as driving up costs annually by five to eight percent. For Helix, imported water costs about $1,300 per acre-foot. Lutar noted that Orange County’s recycled “potable reuse” water costs $700 per acre-foot.

Bolthouse spoke from his experience and educational materials at the Water Conservation Garden. He delivered the stunning fact that over half of water use goes into landscaping. He continued, though, that this is changing, as residents have begun favoring drought-tolerant plantings and realtors have focused on the benefits of low-water gardens. “This is a hurdle to overcome,” Bolthouse said, “on people wanting lush landscapes. But this is a wise decision for future generations.” Resources available to the public at the garden have included sessions on “Fire-Wise Gardening” for homeowners and “Miss Smarty Plants” for children to learn about native flora.

Next month’s LMC event will be a “mixer” with La Mesa Mayor Mark Arapostathis speaking about the La Mesa Oktoberfest. That gathering will be take place on October 22 at Johnny B’s. More information on the organization and upcoming programs can be researched at www.lamesaconversations.org.

SDG&E to stick customers with cost of 2007 wildfires