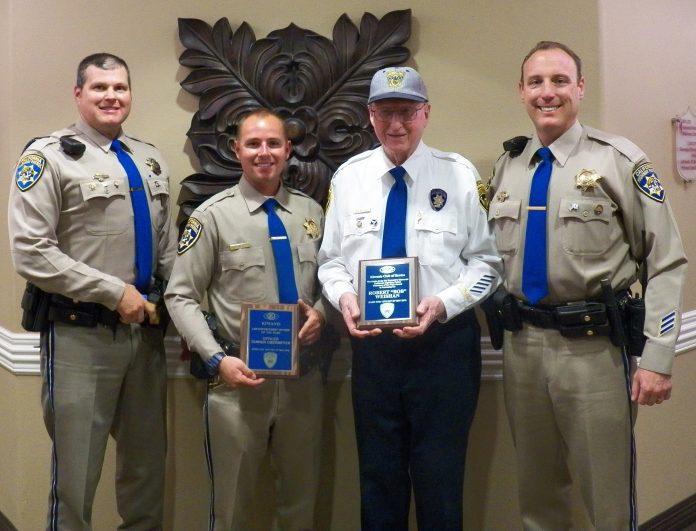 The Kiwanis Club of Santee has a special regard for those who protect and serve local residents in law enforcement positions. On Saturday, May 12, the club hosted the organization’s 21st Annual Law Enforcement Recognition at Lantern Crest Senior Living in Santee. The program included dinner and announcement of awards for standout members of law enforcement in East County, honoring officers who have served with particular distinction over the prior year.

The Kiwanis Club of Santee has a special regard for those who protect and serve local residents in law enforcement positions. On Saturday, May 12, the club hosted the organization’s 21st Annual Law Enforcement Recognition at Lantern Crest Senior Living in Santee. The program included dinner and announcement of awards for standout members of law enforcement in East County, honoring officers who have served with particular distinction over the prior year.

Prominent members of the club have worked in East County as officers and volunteers with police, sheriffs, and the California Highway Patrol, including the Santee Kiwanis Club’s longtime Law Enforcement Awards Program Chairman David Poindexter, who emceed the program and has served as program chairman for the past 20 years.

The influence of Poindexter’s Uncle Andy McReynolds (1919-1996) was central in inspiring the Santee Kiwanis Club to recognize those who defend the laws and protect local communities.

McReynolds was a Kumeyaay Indian, the first motorcycle officer with the El Cajon Police Department in the early 1940’s. The department at that time had four officers.

McReynolds later volunteered for the CHP, with a special focus on helping the Kumeyaay Indian reservation. He was very active with the Kiwanis Club of Santee, and he spent most of the last decade of his life in Santee.

The law enforcement awards program was started in 1998, with McReynolds in mind as inspiration for the Uncle Andy McReynolds Memorial Volunteer of the Year award plaque.

The club has added other awards to the yearly program.

In 2000, the Santee Kiwanis made the first presentation of the Max McKinley’s Memorial plaque honoring a Santee Sheriff’s Senior Volunteer.

McKinley had been an active member of this Kiwanis Club and active in service to the United Methodist Church. He and his wife were foster parents for 19 children. McKinley was among the first Senior Volunteers in Santee, each year exceeding the minimum required volunteer service hours.

“Max was fair and compassionate to all with whom he made contact, and he helped set the standards for the Senior Volunteers,” said Poindexter.

This award was renamed in 2016 as The Max McKinley and Bob Taylor Memorial plaque to acknowledge 41-year club member Taylor, who passed away in 2015. Taylor started the Sheriffs’ Senior Volunteer Patrol in 1994 and was instrumental in developing the Sheriffs Volunteer Academy.

In 2001, the Santee Kiwanis started honoring a Santee Station Sheriff’s Deputy for distinction.

Added to the awards ceremony in 2006 was recognition of a CHP officer from the El Cajon Office. Finally, in 2010, the club started acknowledging a Santee Sheriffs’ Community Service Officer.

The first presenter during the evening program was Acting Sgt. Kris Holm of the CHP Office in El Cajon, announcing the annual CHP Officer Award to Officer Tanner Obermeyer.

Obermeyer has been assigned to the Borrego Post, as sole officer responsible for the area. Obermeyer was recognized for both reaching out to the community surrounding his post and shutting down a marijuana growing operation.

“These awards really mean something to them,” said Brislin before recognizing 2018 awardees. “The senior volunteers do so much for us for free,” Brislin said.

He further noted that these volunteers take collision reports and crime reports, as well as offering assistance at homicide scenes.

Honoree for this year’s Santee Sheriffs’ Deputy plaque award was Cpl. Hilary Gastrich. Brislin cited Gastrich as an outstanding training officer, who has trained multiple deputies and continued with informal training assistance once the formal sessions were over.

Brislin announced that the recipient of the Santee Sheriffs’ Community Service Officer plaque was Alejandro Ramirez. Senior Volunteer LaVonne Schuler, who was unable to be present at the ceremony, was to receive The Max McKinley and Bob Taylor Memorial Volunteer of the Year Award at a later date.

The Kiwanis Club of Santee has been meeting for more than four decades. The group consists of business professionals united for networking and service in their local communities, in a spirit of fun and camaraderie.

The Santee Kiwanis Club holds its meetings at Lantern Crest Senior Living, meeting there for breakfast at 8:10 a.m. on the second and fourth Tuesday of each month. More information on the Santee club can be found on its website at santeekiwanis.org.

‘Under The Big Top,’ Home of Guiding Hands gala