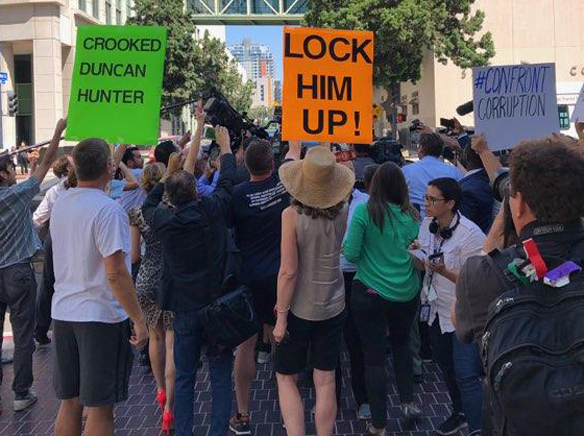 Republican Congressman Duncan Hunter Jr., 43, and his wife Margaret Hunter, 41, pleaded not guilty to 60 counts of conspiracy to commit offenses, wire fraud, falsification of records and prohibited use of campaign funds totaling more than $250,000 at their arraignment on Thursday morning, August 23, at the downtown San Diego federal courthouse.

U.S. Attorney prosecutors allege that from 2010 to 2017 the Hunters spent hundreds of thousands of dollars of campaign funds on everything from a family vacation to Italy to household utility bills.

Republican Congressman Duncan Hunter Jr., 43, and his wife Margaret Hunter, 41, pleaded not guilty to 60 counts of conspiracy to commit offenses, wire fraud, falsification of records and prohibited use of campaign funds totaling more than $250,000 at their arraignment on Thursday morning, August 23, at the downtown San Diego federal courthouse.

U.S. Attorney prosecutors allege that from 2010 to 2017 the Hunters spent hundreds of thousands of dollars of campaign funds on everything from a family vacation to Italy to household utility bills.

According to the government’s complaint, the couple also racked up $37,761 in overdraft and insufficient funds bank fees, indicating the Hunters had financial trouble despite the congressman’s $175,000 annual salary.

The couple arrived at the U.S. District Courthouse separately on a sunny morning and did not sit together during the arraignment in front of Judge William Gallo.

When Congressman Hunter arrived, he was greeted by protestors holding signs that read “Silly Dirty Duncan, Ethics are For Everyone! Resign Now!” and “Flip Congress 2018.”

Hunter is running for re-election in November.

The Hunters cannot currently travel outside of the continental United States and Congressman Hunter must give up the two firearms he owns by Monday.

Assistant U.S. attorney Phillip Halpern told the judge that the Hunters do not appear to be flight risks.

About an hour after the arraignment Hunter exited the courthouse and was met by protestors chanting “Shame!”

They followed him to the street where he got into a waiting car. At one point, Hunter reached out the vehicle window and grabbed one of the protestor’s signs.

During the hour following the arraignment in which Hunter was still inside the U.S. District Courthouse, his Democratic opponent Ammar Campa-Najjar showed up and addressed protestors and the press.

Though the congressman did not make any public remarks after the hearing, his campaign made available a letter he wrote to Speaker of the House Paul Ryan.

The letter stated Hunter would temporarily step down from congressional committees— the House Committees on Armed Services, Education and the Workforce, Transportation and Infrastructure— on which he is serving.

“I fully intend to resume my position as an active member of these committees upon a successful resolution of pending legal matters,” the letter reads.

However, in a statement issued by Ryan’s office Aug. 21 it appeared Hunter was on his way to being removed from those committees.

“The charges against Rep. Hunter are deeply serious,” it read. “The Ethics Committee deferred its investigation at the request of the Justice Department.

Now that he has been indicted, Rep. Hunter will be removed from his committee assignments pending the resolution of this matter.”

Hunter has maintained he will not resign his seat in Congress.

“It’s been a tough time for East County with three elected officials at the federal, state and local levels violating the public’s trust,” Jacob wrote. “If criminal charges against Congressman Hunter are true, he must resign. At the very least, voters must hold him accountable in November, just as they should with State Senator Anderson and El Cajon Councilman Kalasho, who have embarrassed themselves and failed those they were elected to serve. As Ronald Reagan reminded us, character matters.”

Hunter was first elected to Congress in 2008 and will be on the ballot for reelection in November despite his indictment.

Steve Allison, 72, has lived in Alpine for 19 years and said he has been supporting Duncan Hunter Sr. and Jr. since he moved to Alpine. He said he voted for someone else in the primary because of Hunter’s indictment, but will ultimately support Hunter in November because he feels he is still the best choice for the 50th congressional district.

SurveyUSA released poll data on Monday in which SurveyUSA interviewed 850 adults from California’s 50th congressional district from Aug. 22 to Aug. 26, after the Hunter’s indictment. Of the 850 people interviewed, 746 were registered voters in California and 539 are likely to vote in the 2018 election for Congress.

The Hunters next scheduled court date is Tuesday Sept. 4 at 9 a.m.