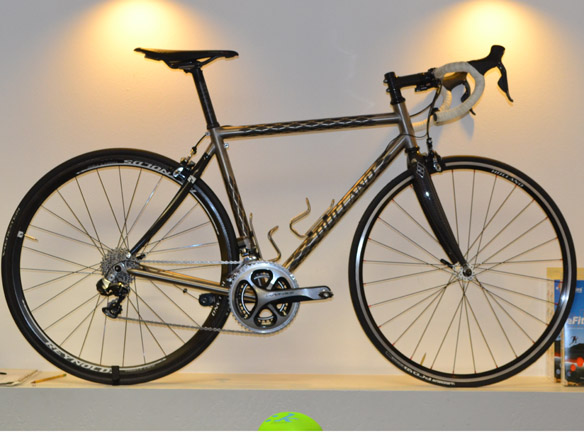 You would never know that anything was behind the door of Holland Cycles in a small, unassuming business complex in Spring Valley. But since 1985, Bill Holland has been creating custom frames for bikes, his specialty, and built a solid company and a world-class product.

Maybe you have seen the weekend riders, riding the 40-mile Great Western Loop (Rancho San Diego, through Alpine, Japatul Valley, to Barrett Lake and ending in Lyons Valley) or on one of San Diego’s hundreds of other trails on a customized road bike built by Holland Cycles.

You would never know that anything was behind the door of Holland Cycles in a small, unassuming business complex in Spring Valley. But since 1985, Bill Holland has been creating custom frames for bikes, his specialty, and built a solid company and a world-class product.

Maybe you have seen the weekend riders, riding the 40-mile Great Western Loop (Rancho San Diego, through Alpine, Japatul Valley, to Barrett Lake and ending in Lyons Valley) or on one of San Diego’s hundreds of other trails on a customized road bike built by Holland Cycles.

Road bike is the term coined by Charles Wells, manager of Holland Cycles. His specialty is making custom wheels. Holland’s specialty is frame building. They met by way of biking, as both men have owned bike retail shops in Spring Valley.

“I’m here by way of the recession,” said Wells, who lost his job in radiology equipment sales before starting with Holland Cycles three years ago. Holland Cycles, despite the downturn in the economy, has not lost momentum and in fact, keeps growing. Holland Cycles has seven people on staff, including its production facility in Alpine.

The success of Holland Cycles can be attributed to many things—a couple of guys doing what they love notwithstanding—but when those guys aren’t necessarily business savvy, turning a beloved specialty into a business requires assistance.

Wells worked with the San Diego Small Business Development Center when he owned his own bike shop. He was 25 years old and chose Casa de Oro because at the time because there was no other retail bike shops nearby. Other than his geographical choice and knowledge of bikes, he was at the drawing board and went to the SDSBDC for direction, guidance, referrals, and encouragement.

“A few things to know about Bill Holland,” said Wells, “He’s an impeccable frame builder, he’s a wonderful guy, but not necessarily a business man.”

Which is why Wells contacted the SDSBDC after coming aboard with Bill Holland. Creating business plans and providing referrals for health insurance are among the services the SDSBDC provided Holland Cycles.

That is the framework of the company. Many other factors keep them in motion.

Average Holland Cycle clients ride between 5,000-15,000 miles annually. For that type of mileage, the product needs to hold up, and be tuned up. A customized process begins in the Spring Valley shop, where a client is fitted. Bikes are then built according to the specifications of the rider, including preferred terrain and biking frequency. Turn around time for a bike is about three months from start to finish. City road enthusiasts or steep mountain bikers, it is a quality product Holland Cycle clientele seek and are provided a “unique, special, high performance bikes,” Wells said, “and we are very proud of them.”

Custom made Holland Cycles fall in the range of $6,000-$16,000. Every 2,500 miles ridden, service is recommended, which Holland Cycles perform in its Spring Valley location in under an hour for less than $100.

“We absolutely insist on satisfaction guaranteed,” Wells said. “Because biking is serious business. A custom made bike for the price of a used car might seem excessive. For some people, a custom made bike is essential and holds lots of value. People buy our bikes and ride them.”

Holland’s clientele are not professional athletes or racers, but enthusiasts and avid cyclers, to whom riding is part of their well being, said Wells.

Clients like Basketball Hall of Famer, “The Big Red-Head” Bill Walton. If anyone needed a custom made bike, it would be a man who stands 6’11”. Bill Walton has been a client of Holland Cycles since the 1980s. He owns three Holland Cycles.

“He is an absolute advocate for cycling,” Wells said.

According to Walton, his Holland is “my wheelchair, my gym and my church all in one incredibly tight, compact, lightweight package.”

It is the quality of the custom built bike that affords Walton, a man whose body has been through an athletic career, countless surgeries and body parts that do not work like they are supposed to, the chance to get on a bike and ride for fun, for exercise, and often, for a good cause.

Walton is involved with the Challenged Athlete Foundation, an organization in San Diego that was established to support the athletic endeavors of people with physical challenges (www.challengedathletes.org).

He provided Scout Bassett, one of CAF’s most celebrated spokespeople, with a Holland Cycle. A triathlete with a prosthetic leg, Bassett, like Walton, promotes and participates in CAF events with Holland bikes as an essential tool in these endeavors.

Holland Cycle’s involvement with CAF goes beyond the biking choices of Walton. CAF and Holland Cycles have worked together to get bikes to challenged athletes needing equipment through grants and other means.

Not just custom built for the bike rider of every walk of life, but “purpose built” as Wells said, Holland Cycles continue to grow into niches in the market requiring durable bikes.

Frames and custom wheels are covered, but outside vendors are necessary for other pieces. Holland tries to use products not only made in the USA but regionally from San Diego when possible.

“We take pride in the fact that our product is made in America but also in San Diego,” said Wells, adding that the titanium they use is sourced through mills in the United States, a choice based upon quality. “Our bikes are built to endure.”

Holland Cycles itself is a company built to endure. Technique, commitment and innovation all contribute to the momentum of this native East County company on it’s own customized, successful trail.

For more information about Holland Cycles’ custom made bikes, history, testimonials  and services go to www.hollandcycles.com.