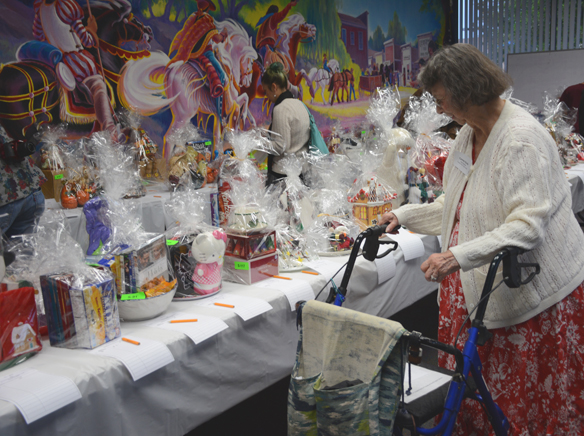 The Friends of the El Cajon Library, a non-profit organization of volunteers dedicated to raising funds and improving the local library, held its annual Holiday Fundraiser on Nov. 3.

This event is held at the El Cajon Library where people from the community gather for a silent and live auction, food and a delightful time with friends and neighbors.

The Friends of the El Cajon Library, a non-profit organization of volunteers dedicated to raising funds and improving the local library, held its annual Holiday Fundraiser on Nov. 3.

This event is held at the El Cajon Library where people from the community gather for a silent and live auction, food and a delightful time with friends and neighbors.

“I think that’s why people come back, they have a good time supporting a community library and providing community services,” said Patricia Wiley, member of the Friends of the El Cajon Library.

Items for the auction are donated from several benefactors, which without, El Cajon’s Library fundraiser would not be possible. These benefactors include many members of the community such as families, who donate any items they can. Desserts by Chris the Baker donated several successful pies, fudge treats and other goods for which people immediately raised their bids.

Many major companies donated to this cause as well. Some of these include The San Diego Museum of Art and San Diego Museum of Man, who provided admission tickets for bidders to bid on in the live auction. Other donors included Dallo Enterprises, the Fleet Science Center, La Jolla Playhouse and more. There were approximately 40 donors for this fundraiser.

“It takes a lot of donations from people who are interested in supporting the library and about a month of my time. I gather up the items and then I start putting them into collections about a month ahead,” said Kathy Woodland, second vice president of the committee of the Friends of the El Cajon Library and organizer of the event.

After receiving the donations, Woodland and members of the committee worked hard to organize the items that would be auctioned. Some items were auctioned at the silent auction the first half of the event and the rest at the live auction that came afterwards. Both were successful.

Woodland said that the previous year the fundraiser raised a total of approximately $4,000, one of the most successful years. Woodland and the rest of the members hope that this year’s auction would be just as successful.

Once the funds from the event are collected the proceeds go to the El Cajon Library. The library uses this money for resources they might need such as books and computers. “All of the money goes for something for the library. They need something they come to us. They give us a budget every year and we look at it and figure out how we can do it,” said Connie Smith, President of the Friends of the El Cajon Library.

The library also funds many programs including children’s programs as well as adult ones. Children’s Storytime, multilingual groups, computer classes and lectures are a few of the programs that this community library provides. The money raised at the Holiday Fundraiser helps fund them.

The El Cajon Library and committee of members dedicated to raising funds for it have a compelling history that goes back approximately 40 years, according to Rita Cloud, one of the founding members of the library. Cloud has dedicated years to helping improve her community.

Many for her diligence to the library and the community that surrounds it admire her. “She’s wonderful, she’s done a lot in the community not just here. Getting different groups together, gets them to talk and to get a better understanding of what their needs are and what we can do to help,” said Wiley.

The Friends of the El Cajon Library are a dedicated group of volunteers who inspire the community and help based on their own merits. “We have grown. We need a lot more people to join and help us. We have a wonderful bookstore and we don’t have enough volunteers to man the bookstore like we would like.” said Cloud who encourages others to become volunteers and become a part of the group of people who dedicate their time to their community.

El Cajon City Councilman Steve Goble attended the fundraiser this year for his first time. “I was invited by the president of the friends of the library and I thought I’d like to be involved in what’s going on in the city I like to see all the things that are going on. I can be aware of what I can do to help. This is a fantastic event,” said Goble.

On a wall in the library stands the artwork of Mona Mills. Mill’s painting expresses the rich history of the library and the people who contributed to its growth and development. Dating back to Native people and colonial times, the community that surrounds the library has grown as seen in the painting. The grandchildren of Cloud are included in this artwork. It can be seen that the people and the land go hand in hand.

This community has developed and grown, and will continue to grow with the help of the volunteers who help, not based on profit but on the love they share for the community they call home. 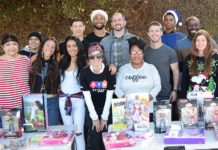 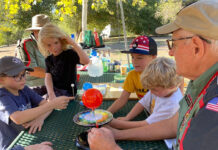 The world is becoming a tougher place for bullies with the...