“It was a challenge with the long wait between dives,” explained Steele Canyon senior Cole Stock, who captured the boys varsity competition with a high score of 254.9 points. “We stopped and then had to start all over again.”

Steele Canyon recorded the top three scorers in the boys varsity field. Stock, who finished undefeated in dual meet competition, led the parade of Cougars on the board, followed by junior Samuel Mascari with 231.75 points in second place and senior Ty Hunt with 222.7 points in third place.

“It was crazy — surreal might be a better word,” Stock said. “It was really fun competing against the divers from all the different schools.”

“My goal has been to score 200 points and I did that today,” explained Baker, who showcased his front somersault dive with a full twist on his final bound off the board. “It’s been an amazing journey. I definitely would not have picked any other sport except diving to compete in. I love my team. It’s satisfying when you work on something for so long and then and are able to do it in a meet successfully. It’s so rewarding.”

Eastman was terribly excited to score a nine on his second dive — an inward dive in the pike position.

“I have never scored a nine in any dive before,” Eastman said with a toothy grin. “I had made it a goal for this season and I finally did it in my last meet this year. My teammates were so excited for me.”

The boys varsity field featured 14 divers who scored more than 160 points and eight divers who topped 180 points. There was little numerical value that separated many divers.

Grossmont sophomore Kaila Getch and Valhalla junior Jordan Alstad entered the league finals as the top two female divers and neither disappointed off the board.

Getch won with 274.4 points while Alstad finished runner-up with 249.2 points.

Both young ladies let the chips fall where they may. 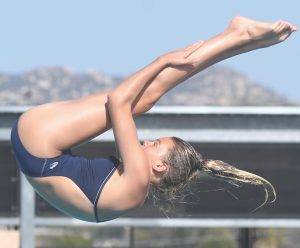 “I definitely had the goal of winning,” said Getch, who was limited to just one meet last year as a freshman before the season fell victim to the COVID-19 pandemic. “I put my best foot forward with all my best dives. I think I performed well. I had a few bumps but I got through them and wound up where I wanted.”

Valhalla coach Maya Fielding said she thought Alstad, a CIF place-winner as a freshman, turned in her best effort of the season.

“I think I had a good meet overall,” Alstad said with satisfaction. “I focused on myself a lot more. I focused on making the meet more fun.”

“Jordan dove great,” Harriman said. “She is very composed and positive when she dives. It’s always a joy to watch.”

All six Grossmont Hills League schools were represented on the diving board.

Granite Hills led the combined field with 13 divers while Valhalla and Steele Canyon both had seven divers compete in the meet. West Hills and Helix both had six divers compete while Grossmont entered three divers.

Meet director Ron Ortiz applauded the efforts of all the participants, staff and spectators.

“It actually went pretty well,” he said. “The divers knew exactly what they were doing. We had a great team of parents who supported the kids. For a COVID season where so much has been taken away from the students and their families, to have this event means so much. That it was a success was a victory for East County.”