A remarkable memoir in photographs and text by Robert Turnbull III, detailing his service in WW II, 1943-45, in the Philippines was donated to the Lemon Grove Historical Society. The memoir was given to the society by his son, Robert Turnbull IV, a graduate of Helix High School, former film, television and theatre actor, and the founder of Turnbull Ministries.

Turnbull III was the former husband of Dr. Amorita Audree Treganza of the famous Treganza clan of art, anthropology and medical accomplishments. They met and married when both were students at San Diego State College in the 1930s. Like his father before him, Turnbull III became a cameraman and Foley expert at Warner Brothers Studio.

The memoir includes 524 black and white, 4×6 photographs accompanied by typewritten notes. Turnbull was inducted at Berkeley, California, into the 29th Engineer Base Topographic Battalion responsible for preparing maps of most of the Pacific Theater of the war, with a primary focus on the Philippines, Formosa, Saipan, islands of the Southeast Pacific, Okinawa and Japan. Training in Oregon focused on surveying, photomapping and photography under difficult conditions, such as aerial while under bombardment. 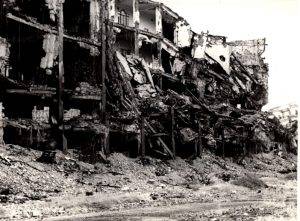 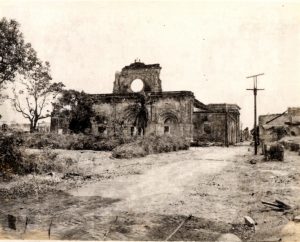 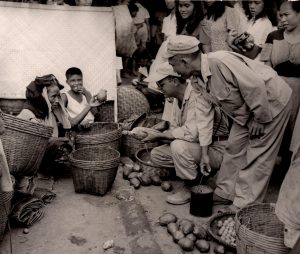 But training also included digging foxholes and trenches, double-time runs with full field pack, drilling and drilling, practicing with bayonets and live grenades, cleaning rifles, and keeping troop quarters and gear spotless. “Naturally, it rained all the time,” recalled Turnbull III in the memoirs. “I had never fired a weapon before and had more troubles than a soap opera.”

Ultimately, he came down with pneumonia and laryngitis and spent two weeks in hospital before shipping out to Lexington, Virginia, to study Information and Education with an international student body eight hours a day, six days a week.

Turnbull III became a multiplex expert, able to convert in 48 hours an aerial topographic map into a ground map of areas 60 miles wide by eight miles long. Between New York and again in Oregon, training continued until “we could build models in our sleep.” It was the departure in a convoy of seven troop ships bound for the Philippines, and service there, that would change each man forever. As William Tecumseh Sherman said, “War is hell.”

“Manila, capital city of the Philippines, was a beautiful, old, Spanish Colonial city that had been bombed back to the proverbial Stone Age by the Japanese,” said Helen Ofield, Lemon Grove Historical Society treasurer. “Turnbull’s photographs and notes capture the devastation. Nothing was spared, not churches, schools, hospitals, neighborhoods, bridges, farms, nothing. Residents rigged up ways to navigate through the rubble and keep their boats afloat, the latter crucial for transportation and selling produce raised in paddies ploughed by water buffalo. Monsoon rains, endless mud, hunger and privation were the order of the day. Turnbull makes frequent reference to the beautiful, resourceful Filipinos and their plucky children. The GIs found ways to help. Chocolate bars and chewing gum. Hiring kids to do laundry. Sharing water and hot food.”

Ofield said the memoirs show that Turnbull’s company survived the return of the Japanese, the rescue by the Americans, the Japanese surrender and the trial of General Yamashita of Bataan Death March fame before being mustered out. As their ship left Manila, they passed an incoming troop transport. “We cheered back and forth…” recalled Turnbull III.

Robert “Bobby” Turnbull IV said his parents were part of the Tregenza tribe since the early 1900s. He said until seeing the memoirs his father created, he never knew about his involvement in the war in the Philippines.

“Early on, he was very much a part of the Hollywood scene in many ways,” said Turnbull IV. “His father was a camera man for Warner Brothers. My grandmother was a silent screen actress for Warner Brothers and my dad was involved in show business behind the scenes as a writer for many years before becoming a teacher.”

Turnbull IV said it was while visiting his father in northern California, that his father showed him his scrapbooks.

“I was in awe of it because it was so well done with his personal comments, the captions and it was so well organized. I was impressed, and he said, ‘One day this will be yours,’ he said.

Turnbull IV, after talking with his son decided that the best place for these memoirs was the historical society.

“My next birthday I’ll be 90, so my years on this earth are short, and after my son had seen it, we decided to take it back to its beginnings,” he said. “My dad met my mom at SDSU, got married, lived in Lemon Grove. I was born there, so I thought I would give it to the Society because I realized that Helen had put so much work into the Treganza name, my mother’s name and all that her father and grandparents did in Lemon Grove for that town, this all flows right into that.”

Turnbull IV said the historical society did not realize what they were receiving, but were “stunned” by the authenticity, the way it was organized, and the detailed information that his father gave within his memoirs.

Ofield said Turnbull IV gave the society 33 volumes of his father’s (Turnbull III) scripts for both radio and early TV shows on the then Columbia Pacific Network.

“They featured a who’s who of Hollywood stars. 660 originals plus 215 repeats for a total of 875 scripts with diverse plot lines, from period adventure dramas to contemporary comedy-drama,” she said. “He was a terrific writer and fast, and all on a portable typewriter. As Bob has conveyed the rights to us, we can extend rights to Helix High Theatre Department [at Turnbull’s IV request] should they wish to produce some of the productions. We have sent the offer but haven’t heard back yet.”

Turnbull III also wrote a book on radio and TV sound effects, “Radio and television sound effects: With drawings by the author,” published in 1951 and still on sale on Amazon today.

“It is the only book ever written on Foley radio, TV sound effects. Colleges and universities around the country grabbed copies for their theater art departments,” said his son Turnbull IV.

Turnbull IV sent the memoir that Ofield had sent to his son, Robert B. Turnbull V. His father read his son’s reply.

“Dad. This is so cool. When I read this, I think of all the ways I might not have come into existence. Had something happened to him while he was in the Philippines, had he not met grandma Triggie at SDSU. Any number of things. Had you not met Julie (my son’s mother) in Hawaii, and the list goes on. It is interesting to see how I came into being and how each of us came into being. When you look at it this way if feels more like that you have a purpose. Like you were meant to be. Which of course, we are.”