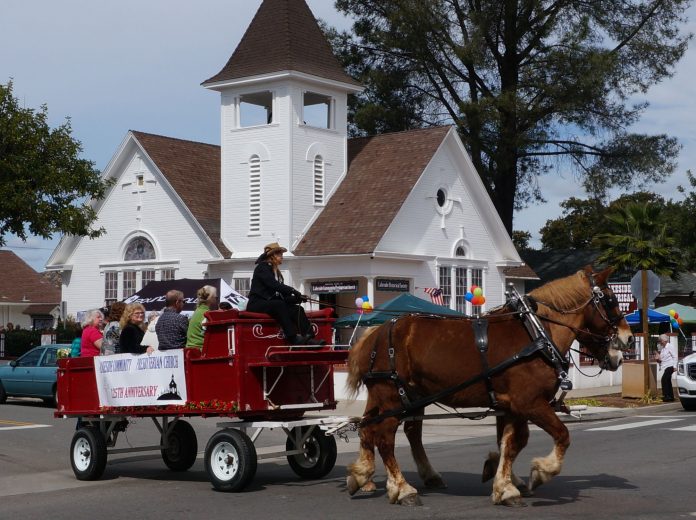 Anyone passing through Historic Downtown Lakeside on Mar. 18 might have thought they had travelled into the past. The church bell was ringing and hymns were rising from the Olde Community Church at Maine and Parkside, something that has not occurred for many years. It seemed those days of yore had somehow returned.

Anyone passing through Historic Downtown Lakeside on Mar. 18 might have thought they had travelled into the past. The church bell was ringing and hymns were rising from the Olde Community Church at Maine and Parkside, something that has not occurred for many years. It seemed those days of yore had somehow returned.

In reality, it was a very special celebration that filled the old chapel with people and music: the 125th Anniversary of the Lakeside Community Presbyterian Church.

For anyone passing by outside, it was a thrill to hear the music emanating from the old church once more. For the 100-plus folks who crowded inside, it was pure joy to share a few songs before their luncheon to honor the founding of the Presbyterian Church in Lakeside.

In 1893, the original congregation of just 13 Lakesiders held their first service on the porch of the long gone Lakeside Inn. After three years there, the membership had outgrown the space and a new church was needed. Construction of the First Presbyterian Church of Lakeside began in November 1895, with services held the following February. A formal dedication ceremony took place on Mar. 29, 1896.

This was the first church built in Lakeside and the only church in town for many decades afterward. The house of worship was designed in a Colonial Greek Revival style by noted architect Moses Frink. W.H. Hanchett built the structure using redwood.

By the early 1960’s, the congregation had once again outgrown its site and another new church was built on Channel Road. The Olde Community Church, as it is often called, was eventually purchased and restored by the Lakeside Historical Society in the mid-1990’s. The LHS recently had the building repainted and new plastic panels installed to protect the original stained glass windows. The building nearly sparkles and looks as good as ever. It actually qualifies for the National Register of Historic Places and the historical society is looking to pursue that designation.

Though church services are no longer held at the site, Pastor Dr. Bob Mentze thought a celebration luncheon would be appropriate to honor the history of the congregation and the building. After their regular Sunday Morning Services on Channel Road, church goers either walked the two blocks down Parkside Street, or were treated to an old fashioned horse and carriage ride. Lakesider Sioux Swart provided the two-horse team that carried delighted passengers to the front of the old church, reinforcing the historic feel to the event. Few could remember the last time regular horse travel was seen in town, once such a regular part of life in Lakeside. It was a “stop-and-stare” moment for all in the community, one that brought a smile to every face. It was a reminder of the way things once were around Lakeside.

Speaking of the Olde Community Church…

If you hear the church bell ringing at midday on April 25, do not be alarmed. The Woman’s Club of Lakeside will be commemorating the 100th Anniversary of the Victory Bell.

The first Victory Bell was rung in Lakeside in 1918 by Eleanor B. Parkes, in the presence of 500 delegates from the Woman’s Clubs of San Diego County. It was such a different time in America. In the midst of World War I, citizens were experiencing consumer shortages and the appalling casualties and loss of loved ones. The story goes that the women of Lakeside started gathering daily at the church and at noon would ring the bell seven times – one for each letter of the word VICTORY. The ringing was followed by a moment of silent prayer.

The symbolic movement spread to other churches across the nation and continued until the end of the war. Lakeside is credited with its beginnings.

Interestingly, the bell in the tower is original to the Olde Community Church. It was made by the C.S. Bell Company of Ohio and installed when the church was built in 1895-96.

Back in 2005, the historic Bostonia House now at Lakeside’s River Park Conservancy was saved and moved to 12108 Industry Road. The plan was to convert it to serve as a classroom and science field station for children visiting the park. Unfortunately, that was 13 years ago and, with the discovery of lead paint inside and mitigation a costly option, the Conservancy has decided they can no longer use the old building. They are offering it to anyone who wants it – for free – except for the cost of moving it. Anyone who might be interested can call the Conservancy at (619) 443-4770.

APRIL 14: After having been rained out in March, the next One Street at a Time cleanup is scheduled for Saturday from 8:00 to 10:00 a.m. Meet in from of Planet Fitness on Woodside Avenue and spend a quick two hours improving your community.

APRIL 28: The Lakeside Historical Society is hosting its annual Western Days Breakfast from 7:00 to 9:30 a.m. in the Old Community Church at 9906 Maine Avenue. For only a $5 per person donation, you get a grand cowboy meal to start your day. Then you can step out onto Maine Avenue and enjoy the Western Days Parade, which starts at 9:35 a.m.

Annual poker run is both fundraiser and memorial