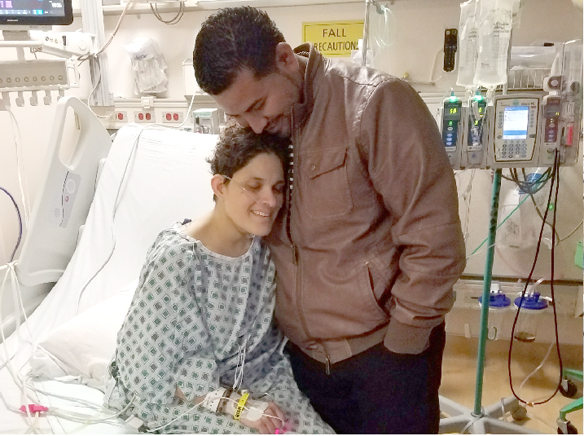 The Lakeside Veterans of Foreign Wars (VFW) is hosting a special breakfast from 9:00 – 11:00 a.m. on Sunday May 21, to which all are invited. The purpose is to help a fellow warrior, Ana Sanchez, the subject of a previous story. Sanchez is a Marine veteran who served as a member of a Female Engagement Team in combat as part of the Lioness Program, in addition to her regular duties when overseas. An Ammunition Technician by assignment, she described the overall experience as, “one day I was pulling out bullets and the next day I was shooting them.”

The Lakeside Veterans of Foreign Wars (VFW) is hosting a special breakfast from 9:00 – 11:00 a.m. on Sunday May 21, to which all are invited. The purpose is to help a fellow warrior, Ana Sanchez, the subject of a previous story. Sanchez is a Marine veteran who served as a member of a Female Engagement Team in combat as part of the Lioness Program, in addition to her regular duties when overseas. An Ammunition Technician by assignment, she described the overall experience as, “one day I was pulling out bullets and the next day I was shooting them.”

No longer on active duty, Sanchez is active with the VFW, as described in the earlier piece. She stated being part of the VFW is her greatest achievement since leaving active duty, relating that she does a lot every single day. She is the Quartermaster for Lakeside VFW, VFW First District’s 30 Year Trustee, and VFW First District’s Women’s Veterans Chairperson. Sanchez stated it very rewarding to “be able to still give back to veterans, to those who actually need it.” Asked what the VFW provides her that she cannot get somewhere else, her reply was, “I’m not going to say camaraderie, it’s family. They give you that feeling of family, like you are actually at home.” Even with the generation, age, and gender differences, she attributes part of it to a shared understanding, because “everyone knows what you’ve been through.”

Active duty and combat may be behind her, but she is still in the fight, this time with cancer. Following is part of what Sanchez recently posted on her GoFundMe page, “I had my stomach surgery again on Monday…[and] was given an answer to as what the obstruction. My cancer has migrated to my [intestines] and now [I] am diagnosed with Stage IV B (bladder) Cancer. I had to have surgery again on Thursday, due to my PICC line getting infected and have an infection in my blood. I am now stable and yesterday I was able to stand for the first [time] since my Surgery. I’m hoping to be out to the hospital…to start my natural remedy process.”

The VFW family of which Sanchez spoke is stepping up. Paraphrasing Sanchez, they are coming together to give back to a fellow veteran, one who actually needs assistance. Barbara Channell explains that, “The Lakeside VFW will be coming together on Sunday May 21st to raise money for our hero Ana Maria Sanchez-Jimenez! She fought for our country as a Marine. Now we need to help her fight cancer. She is married and a mother of two terrific kids. She is serving Veterans as a Quartermaster of our post #5867. Breakfast will be from 9 a.m. to 11 a.m. at the Lakeside VFW at 12650 Lindo Lane, Lakeside. There is a raffle and other fundraising fun for Ana!”

The fight continues, this time here at home. And it seems not to be an unusual fight for some of our veterans from the recent wars. A basic Internet search of cancer plus Iraq/Afghanistan veterans produces large numbers of articles and stories about the increased occurrence of this deadly disease amongst this population, male and female. This is not stating that the cancer attacking Sanchez is a direct result of her service overseas, but the information available online certainly provides pause for thought. Regardless of the underlying causes, Sanchez is in another fight.

She is continuing to fight, just as she did pursuing her goal of becoming a Marine. She broke her leg during an initial period at Recruit Training and was discharged. Subsequently displaying the strength and resolve that define her story, she healed, got back into shape, and returned to Boot Camp for a second time. (Most Marines think one time was more than enough.) Sanchez was not to be denied her goal of earning the Eagle, Globe, and Anchor, of becoming a United States Marine. Resolute and drawing from incredible inner strength, she successfully completed Boot Camp and began her fourteen years of active duty.

Fourteen years during which she continued to overcome challenges, to succeed, including volunteering at times, as she did for the Lioness Program. Looking for whatever it took to complete her assigned mission, including when out on combat patrols. Earlier, she candidly spoke of one specific challenge as a member of the Female Engagement Team. “It was pretty tough,” she said without shame or hesitation, discussing the difficulty, the challenge of having to urinate when out on a mission. As she put it, “I had to be more of ‘hey, watch my back,’ because I have to squat to go to the restroom.” Sanchez dealt with the challenge and accomplished her mission.

While fighting this daunting challenge, she is not alone, with her family at her side. And her extended VFW family is there for her as well. It may be cliché, but they are standing by one who stood for us. They will be there at the Lakeside VFW on Sunday May 21, hosting the fundraising breakfast to help support Ana Sanchez, and will sincerely appreciate your help to help Ana.

‘These Shining Lives,’ a play about women’s early contributions to a...