The Highlanders stormed out to a 20-9 lead before holding off a spirited comeback by the Monarchs.

“We won the matches we were supposed to win, we got some pins when we needed them,” Helix head coach Adam Krzywicki said.

Monarch head coach Mat Simone said he was proud of his team’s effort against Helix.

“We had four freshmen and one first-year wrestler in the lineup, we wrestled tough,” Simone said. “We have nothing to hang our heads over. We bat­tled to the very end and made it close. We have a lot of young guys. This team has a future.”

The Highlanders won the opening three matches to zip in front 17-0 on the scoreboard. 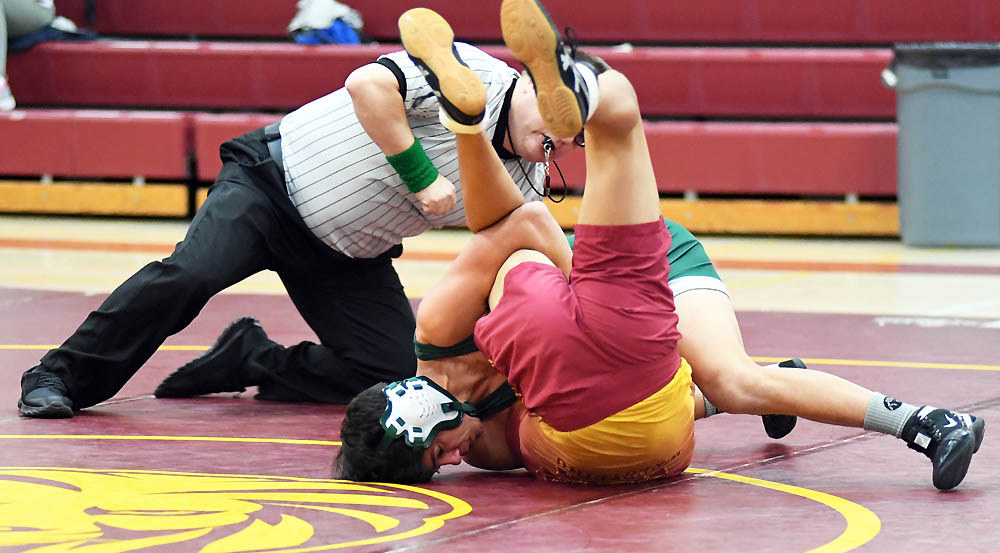 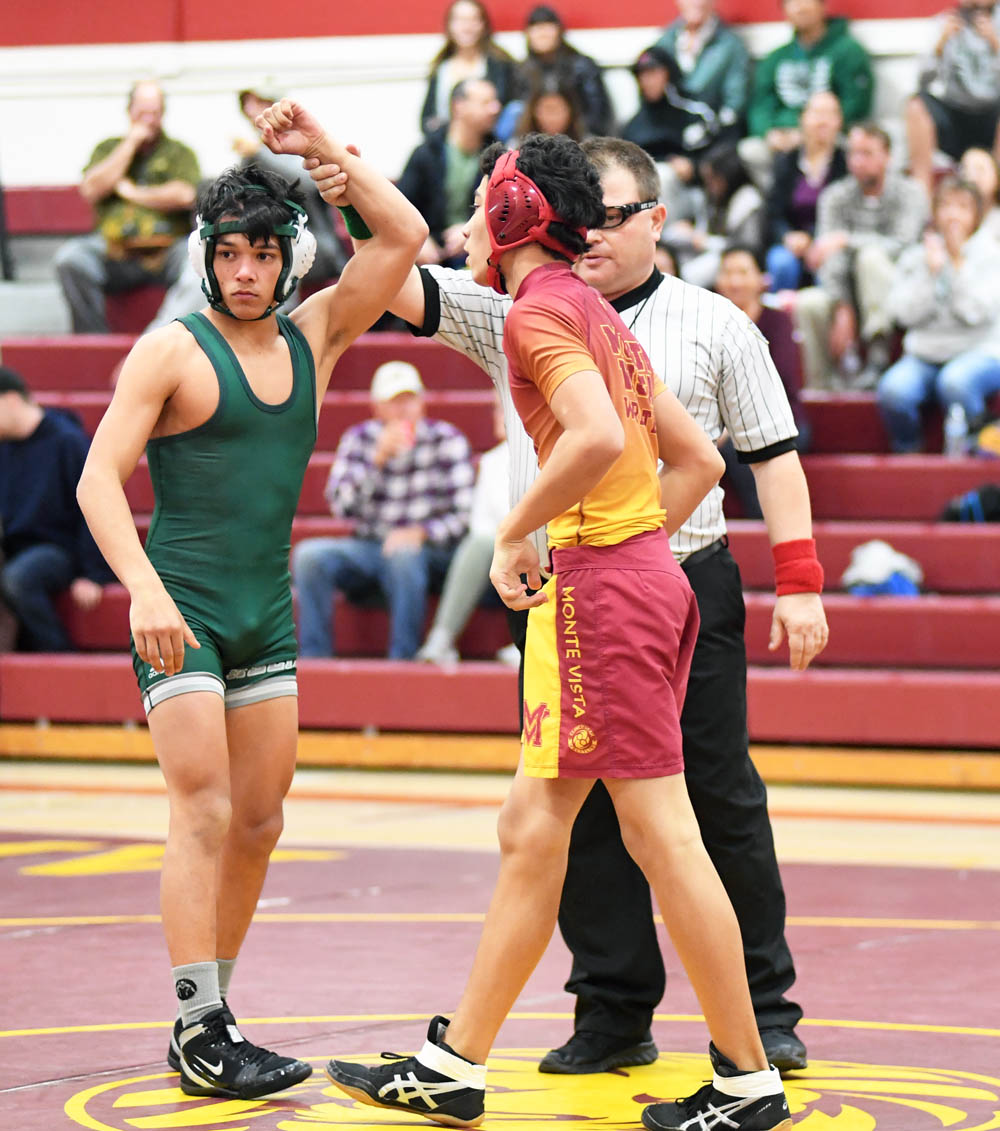 Kamron Vasquez won by a first-pe­riod pin at 106 pounds to stake the visitors to quick 6-0 advan­tage. Teammate Ryan Nguyen followed with a 15-0 technical fall at 113 pounds to extend the lead to 11-0 while Isaiah Graves tacked on a pin in 19 seconds at 120 pounds to add to the early point explosion.

Dakota Jacome gave the home crowd something to cheer about when he stormed back from an early 9-1 deficit to win by a pin seven seconds into the second period at 126 pounds to make the score 17-6.

Krzywicki said the turning point in the dual meet for his team came in the next weight class at 132 pounds when Kai Malek recorded an 11-2 major decision, tacking on four teams points to the team’s total instead of three for a minor decision (less than an eight-point margin be­tween the wrestlers).

“He continued to wrestle in the last 20 seconds,” Krzywicki said. “He turned what was going to be a regular decision into a major decision. He gave us an extra point on the scoreboard. Those things boost the team and get the kids excited for their matches coming up.”

The Monarchs reeled off con­secutive wins at 138 and 145 pounds to narrow the score to 20- 15. Zahi Davis won by a 9-6 deci­sion at 138 pounds while team­mate Thomas Wilcox persevered to record a pin with 34 seconds remaining in the second period for six team points.

Helix’s Ty Dean received a for­feit win at 154 pounds to stake the visitors to a 26-15 advantage.

But the hosts hung close when Jared Reinholdt scored a 4-2 de­cision in his 160-pound match to trim the deficit to 26-18 with five matches remaining.

The Monarchs closed out the dual with a 7-1 decision by Lo­gan Schmidt at 220 pounds and a second-period pin by Sebastian Valdez at heavyweight to fall five points short on the scoreboard.

The last time that Helix won a league wrestling title was in 2016.

Last Thursday’s dual meet served as a homecoming for Krzy­wicki, who won a CIF individual championship while competing at Monte Vista.

“It’s always fun to come back,” Krzywicki said. “Being a student-athlete at the school and then working there, it’s always a good feeling coming back. I enjoy it.” 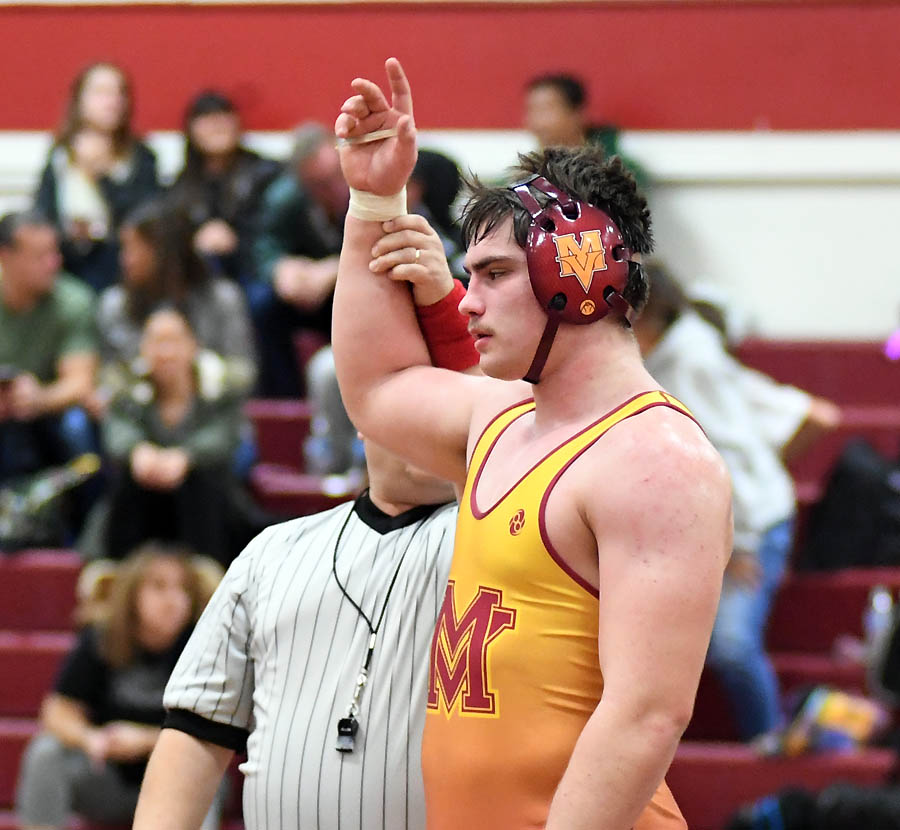 Carroll finished 5-0 with three pins and a major decision. He pinned Rancho Bernardo’s Ryan Badgett in 2:08 in the finals.

“We wrestled well overall,” Granite Hills head coach Jesse Sheard said. “We brought some young guys who made it to the second day, which is something to look forward to. We had three placers. Carroll was impressive. He wrestled tough and couldn’t be stopped that day. I’m proud of that kid. He has come a long way and seems to be turning it on at the right time.

“Corella wrestled well. He had some tough matches and fought the whole time. Also turning it on at the right time. Miramontes is coming back from an injury and seems to be getting back in the grove.

“We wrestled well, but we have some things to fix before CIF and Masters.”

Robinson won his opening four matches, including three by pin, before dropping a 4-3 decision to Rancho Bernardo’s Nikko Beato in the finals.

Jordan won his opening four matches, two by pin, before dropping a 9-3 decision to Valley Center’s Thomas Lavigne in the finals.

Cardenas also won his first four matches – two by pin and another by a major decision – before falling short in the finals with a 6-4 loss to Olympian’s Gonzalez.

Track season cut short but not for a lack of effort...