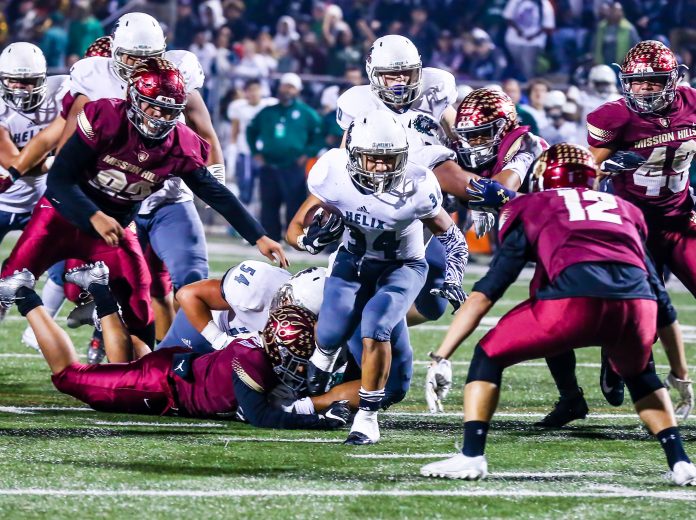 The 2018 high school football season kicks off Friday, Aug. 17. With it comes a new season of expectations.

The San Diego Section has tweaked its playoff format for the upcoming campaign, one that should make every division that much more competitive.

The top tier Open Division has been reduced from eight teams to four, with four top-quality teams now joining the fight for Division I supremacy.

The 2018 high school football season kicks off Friday, Aug. 17. With it comes a new season of expectations.

The San Diego Section has tweaked its playoff format for the upcoming campaign, one that should make every division that much more competitive.

The top tier Open Division has been reduced from eight teams to four, with four top-quality teams now joining the fight for Division I supremacy.

All teams placed in the Open Division/Division I field will continue to make the playoffs. But with four fewer teams than last season, there is hope that a winless team will not be included in the group.

Bonita Vista finished 0-10 last season and was guaranteed a playoff berth, thus finishing with a rare 0-11 record following a postseason loss to Oceanside.

There is the belief that the Division I field will be considerably strengthened with four teams that would have qualified for the Open Division in previous years and four bottom teams no longer available for selection.

The Open Division will become a dogfight with just two rounds of playoffs — the semifinals and championship game.

According to preseason playoff predictions by MaxPreps, Helix has the best chance to win this year’s Open Division title, followed by Torrey Pines, Mission Hills and Madison.

That would leave Steele Canyon as the top candidate to win this year’s Division I championship, followed by top challengers La Costa Canyon, San Marcos, Eastlake and Grossmont.

The Scotties could not get past Folsom in the Division 1-AA state championship bowl game, however, dropping a narrow 49-42 decision.

Elelyon Noa returns from last year’s Helix team after rushing for 1,782 yards and 15 touchdowns to cap a superlative sophomore season.

Helix, which once again plays a challenging schedule, kicks off the new season with a game at San Bernardino Cajon, the runner-up in last year’s Division 2-AA state bowl championship game.

Steele Canyon defeated Ramona, 33-29, to win last year’s Division II championship before going on to capture the Division 3-A state title. The Cougars turned in one of the most unforgettable seasons in 2017 after being seeded just seventh in the section playoffs.

There were a couple more cliffhangers in store for the Cougars in the state playoffs — a 28-26 win at El Modena in the semifinals and a 44-42 victory against Half Moon Bay in the state championship bowl game.

Steele Canyon finished the season with a flourish by winning its final eight games, including a state record six playoff wins, to conclude its high-achieving season with a final 12-4 record.

Best of the rest

Granite Hills earned honors with a 49-30 upset win over third-seeded Valley Center in last year’s Division II quarterfinals. The Eagles — 10-3 a season ago with a Grossmont Valley League championship in tow — return nine starters from last year’s CIF semifinalist team as the team switches over to the Grossmont Hills League this season.

With Southwest El Centro (14-1 in 2017) moving up a division, what teams will fill the power vacuum in Division III? The MaxPrep rankings favor Monte Vista, Santa Fe Christian, Brawley, University City and El Capitan in that order.

McClendon, who is ticketed to play locally for SDSU next year, has rushed for more than 4,000 yards and scored 60 touchdowns in his prep career to date.

Tight end/defensive lineman Blake Schmidt, who will play at Montana State at the next level, is another impact returner. It was Schmidt’s ankle tackle on Chula Vista’s Kajahan Duncan that preserved a 29-28 overtime win in the quarterfinals of last year’s playoffs that cleared the way for the Monarchs to make their CIF title run.

The Division V playoffs expand from eight to 12 teams this season, so expect the field to be more competitive, especially in the first round.

Vincent Memorial ran away with last year’s Division V title and is picked to win it again. There could be some surprise challengers, including Mountain Empire, Palo Verde Valley, Francis Parker and Holtville.

Vincent Memorial topped Crawford, 45-3, in last year’s section final before going on to drop a 38-20 contest to San Francisco Galileo in the Division 6-A state bowl championship game.

Of the section’s six state playoff qualifiers last season, Steele Canyon was the only one to win a state championship.

Helix, Southwest El Centro and Vincent Memorial all lost in state bowl championship games while El Camino and Monte Vista finished their seasons with losses in the regional playoff round.

Helix to fight for state championship