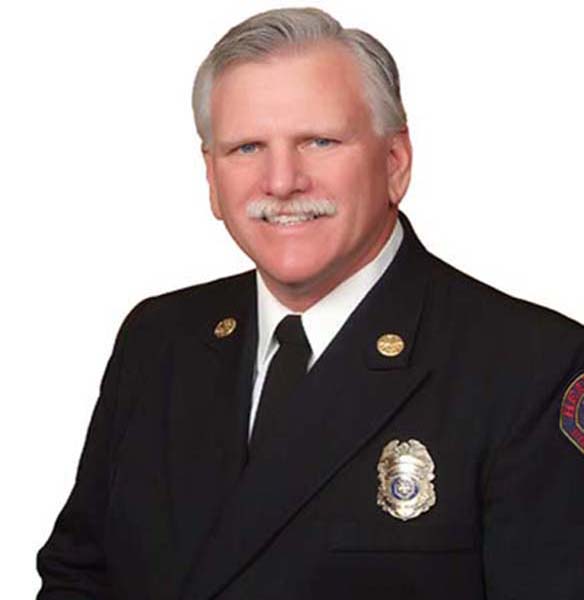 Retired Heartland Fire and Rescue chief Mike Scott has a new assignment working to make San Diego a safer and more secure place.
“I have taken on a project to look at future technologies that can support our homeland security program,” said the 50-year-old Scott who said he’s not ready to retire.

“The objective is to put law-enforcement tools and technologies in the hands of first responders that make their job easier, give them the information they need,” he said of his new role.

Retired Heartland Fire and Rescue chief Mike Scott has a new assignment working to make San Diego a safer and more secure place.
“I have taken on a project to look at future technologies that can support our homeland security program,” said the 50-year-old Scott who said he’s not ready to retire.

“The objective is to put law-enforcement tools and technologies in the hands of first responders that make their job easier, give them the information they need,” he said of his new role.

“We’re creating a regional public safety database sharing mapping information about hazards across the region,” he said adding that mapping was previously fragmented with each city having its own.

“On the law enforcement side we’re deploying a lot of license plate identification and camera surveillance programs. We’re putting the tools of technology in the hands of first responders and decision makers to be better prepared to meet homeland security or public safety objectives,” he said.

Noting he’s come a long way in 28 years after moving to San Diego from the L.A. area to attend paramedics school in his early 20s, Scott said the mission for firefighters like himself remains largely unchanged. “We’re there to serve the community and respond to emergencies,” he said.

Scott is most proud of the role he played in establishing the joint powers agreement entered into by Heartland’s three east county cities creating a single management team overseeing the operations of all three fire departments, which includes a total of about 150 personnel covering a 28-square-mile area with a population of about 180,000.

“Personally, that was the most significant accomplishment, my biggest legacy project, bringing the three city fire departments together to serve the community in a slightly different way,” he said. “I was the project lead and it was my position to help shepherd the process. In the fire chief’s role, it was my job to make sure that it worked.”

The cooperative management approach of the joint powers agreement strengthened the firefighting organization while streamlining operations and improving efficiency. But most importantly, it cut costs.
“We saved money along the way, collectively between the three cities about $1.5 million over the last 2 years,” said Scott.

In October 2009 the city managers of El Cajon, La Mesa and Lemon Grove appointed Scott to oversee cooperative management services for the three departments when they merged on Jan. 1, 2010. Those efforts were recognized by the Taxpayers Association when Chief Scott accepted the Golden Watchdog in May 2010.

There were a number of other “firsts” accomplished by Scott during his firefighting tenure.
Beginning his career in 1984 as a firefighter/paramedic, he was one of the original California Task Force-8 Urban Search and Rescue team members. He started as a Technical Rescue Specialist and deployed to the Northridge Earthquake in 1994 and to the Atlanta Olympics bombing in 1996.

He transferred to the Canine Division where he was partnered with “Billy,” a devoted Black Labrador, in 1998. He and Billy became the second Canine Search team in the county ever to be certified by Federal Emergency Management Agency (FEMA). They served several local missions before being deployed to Ground Zero shortly after the 9/11 terrorist attacks in New York.

Another of Scott’s accomplishments was the creation of a reserve firefighting program begun when he was El Cajon’s fire chief 7 years ago.
“The idea was to supplement our firefighting resources at minimal cost,” he said noting, “We also create some of our future employees.”
One of those future employees could turn out to be Scott’s son who hopes to follow in his father’s footsteps.

Looking ahead, Scott sees the “regionalization” of San Diego County’s numerous fire agencies continuing and “gaining more traction.”
“Unfortunately that doesn’t happen overnight,” he said adding, “It takes a little time and maybe the right circumstances.”
Noting bigger is not always better, Scott nonetheless pointed out there are decided advantages in firefighting to combining resources and pooling efforts that “might make sense.”

Departing as Heartland’s chief, Scott said he was sad to go but looking forward to the challenges ahead striving to help firefighters do their jobs better.

“I have been deeply honored to serve as the fire chief for the Heartland Fire & Rescue Joint Powers Agreement. We have built a solid organizational foundation and I am confident that this effort will continue to succeed,” he said noting, in his new job in homeland security, that he hopes to find new and improved ways “to protect against everything from acts of terrorism to natural disasters.”

“To be prepared for all those things you have to put the right tools in the hands of people who make decisions and respond to those things,” Scott concluded.