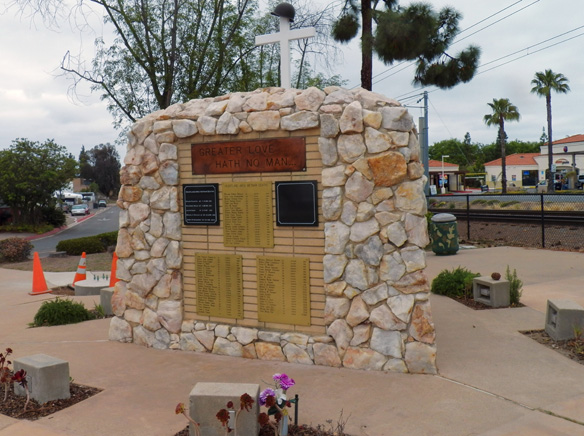 The Vietnam War was slowing down but still so contentious that normal civility among Americans had soured. Nevertheless, some then-youngsters in East County were determined that their neighbors who had fallen in that conflict would be honored, just as war dead had been remembered for sacrifice throughout U.S. history.

The Vietnam War was slowing down but still so contentious that normal civility among Americans had soured. Nevertheless, some then-youngsters in East County were determined that their neighbors who had fallen in that conflict would be honored, just as war dead had been remembered for sacrifice throughout U.S. history.

Heartland Youth for Decency (HYFD) advocated, and then supported building one of the first such memorials ever, to those East County troops who died in Vietnam. (The “Heartland” area refers to East County’s La Mesa, El Cajon, Spring Valley, Lemon Grove, and Lakeside.) Oresta Zalopany was one of those teenagers. Her father, Orest Zalopany, was the mason who volunteered and built the stone memorial with engraved plaques on the sides and a white cross atop. Groundbreaking to completion took four months. The original dedication ceremony for the simple La Mesa monument was held on June 14, 1970.

Remaining members and descendants of the original memorial builders group will stage a rededication of the restored Vietnam War Memorial, and they are seeking surviving family members and friends in the area to attend the upcoming ceremony to honor their deceased loved ones. They are also asking for sponsors to help with donations funding the restoration and maintenance of this place of remembrance.

Now Oresta Zalopany Johnson, this founding member of HYFD described recent events that impelled the renewal efforts. She visits the HYFD Vietnam War Memorial on special occasions to remember her father and place a rose amid the stones. On January 13, 2013—her father’s birthday—she was troubled upon discovering that two of the memorial plaques had been stolen and that royal blue graffiti tagged the entire left side of the stonework. The irrigation system was broken. The flagpole was rusting.

She enlisted helpers who cleaned the memorial’s masonry, then applied an anti-graffiti clear coat of urethane for protection. The two missing plaques were reproduced in granite and readied for remounting, but mason James Elliot asked a pertinent question, “Where is Terry Crabtree’s name?” And that both delayed and enlarged the restoration project.

A year ago, Oresta Johnson reconnected with former HYFD leader Denise Evers Rhoads to track down another five names of Vietnam casualties that needed to be added to the memorial walls. There were 57 names on the original dedication day. There are 74 now.

Constructed in difficult days, the memorial has survived through other difficult intervals. Expansion of trolley line tracks took part of the land. The city of La Mesa was forced to transfer ownership of the memorial to adjacent La Mesa American Legion Post 282, after city coffers were threatened with bankruptcy from litigation on behalf of atheist plaintiffs, who objected to city land containing a cross.

Johnson received support from Post 282 and from Vietnam Veterans of America Chapter 472. Typical of the family members being sought by the HYFD volunteers are the Baums. Their son Douglas fell in Vietnam, and these parents are in their 90s, still living in the same La Mesa home as in 1970.

Johnson said, “We need to get the word out to families.”

She described the fundraising as at about the halfway mark for what is required to complete the repairs and to add elements honoring those troops still missing.

The restored monument will feature a blank plaque, to be engraved with the name of any serviceman whose remains are discovered and repatriated, as well as a permanent empty chair symbolizing the place that prisoners of war and missing in action hold in memory. Other additions will be surrounding plaques for each branch of military service.

“This is the little jewel of La Mesa,” she said. “The memorial represents to me that every man named gave the ultimate sacrifice so we can be free. We want others to know that they are not forgotten. And we hope future generations will care and always look after the memorial and cherish it much.”

The HYFD Rededication Ceremony will take place on June 14, 2014 at 9 a.m. on the northwest corner of Spring Street and University Avenue. More information about the event and the monument’s history can be found at www.hyfd.org.