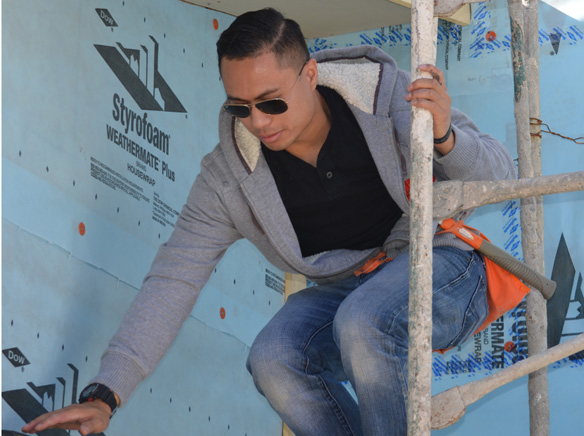 Building for the Brave. It is the first undertaking for San Diego Habitat for Humanity (SDHFH) in providing affordable home ownership to disabled veterans and their families. Breaking ground in March, all four of the Lakeside homes projected for completion by July.

Building for the Brave. It is the first undertaking for San Diego Habitat for Humanity (SDHFH) in providing affordable home ownership to disabled veterans and their families. Breaking ground in March, all four of the Lakeside homes projected for completion by July.

Lori Holt Pfeiler, Habitat for Humanity executive director said when it sells a home to a family, it changes the family and the community. She said they are actively looking for tenants for the new adaptable homes. She said SDHFH finances qualified buyers with a zero interest, 25-30 year mortgage.

“When they move into a home, they are no longer in survival mode,” she said. “They aren’t worried about what is happening and can focus on being part of the community. Our wounded veterans need that community.”

Pfeiler said they have been reaching out to different veteran outreach sources in looking for families to buy the homes.

Working with Habitat for Humanity, Mark Knox, from La Mesa is the construction superintendent. He said in 2011, it bought the single house rehab and found that it was completely rotted out. It had to be completely torn down and they asked for the adjacent lot and decided to build housing for disabled veterans.

“So it became Building for the Brave,” he said.

He said the plans are for four two-story townhomes, 1,500 square feet with a two-car garage. Downstairs has an accessible bedroom, bathroom and kitchen and upstairs three bedrooms and a bathroom.

“All the doors and hallways are slightly oversized to accommodate whatever disability the veteran might have,” he said. “The families have not been identified yet. We would really like to get families out here right now so we can customize the house to their needs.”

Knox said on site build days, they try to have around 15 volunteers. He said he has three to six “regulars” that come out and work on these days.

“They are one of the key elements that keep this project going,” he said. “They work with the small groups of volunteers as a team leader.”

Rita Chiomis, Pacific Beach, said it was her second trip out to the site and was spending the day working on hardy board trim.

“I’m on the Matt team,” she said. “I’m a nurse from the Navy hospital and found out about this project through its volunteer board.”

Matt Hallett said he has worked with SDHFH for nearly 13 years and on this project he comes out to the site three times a week.

Ron Falldorf, from La Mesa, has worked for SDHFH for 18 years, first as an employee, then as a volunteer. Falldorf is a veteran, retired electrical engineer and began working on site in October.

“I’m one of the regulars,” he said. “They break us up into small teams and I work with the new people so that things can keep moving.”

His first trip to the site, Demetrio Pindeda, an active duty corpsman from the Naval Medical Center San Diego.

“This is completely alien to me,” he said. “But I am a quick learner myself and Ron is a great teacher.”

This property is located at 12306 Lakeshore Drive in Lakeside and is made possible by the County of San Diego, The Home Depot Foundation, TD Ameritrade, SAIC, Cox Communications and the many corporate and individual volunteers.