Karen Smith began her business Gym Trix gymnastic center in 1996 as a mobile gymnastics program working out of the Alpine Fitness Club, the Alpine Community Center, and other fitness clubs in East County, setting up at each location and offering gymnastic classes.

Smith was a competitive gymnast, and in high school began competitive cheerleading. She was part of the original all-star team in San Diego, the All-Star Rebels, which was the foundation for all the all-star programs in San Diego.

Gym Trix opened its first physical location in 1999, and after a few moves found its home in 2012, right next to Boulder Oaks Elementary School while expanding its gymnastics and cheerleading programs. “We love it here because the kids just walk over after school and do gymnastics and it is really fun,” she said.

“It is not around anymore, but all the all-star cheerleading programs started from them. I did that, and I fell in love with coaching. I used to teach for local clubs in the area then I got ambitious and started coaching for myself through the mobile program.”

“We have a competitive cheerleading program, and we also offer a competitive gymnastics team that is exceptionally different from any other program in the area,” she said. “It is called Power Team Gym and it is group gymnastics. They start competing in this at 5-years-old, and we are the only facility in East County. The only other facilities that have this are in Fallbrook and La Jolla.”

Smith said group gymnastics compete as a group with floor routines with six to 12 people and compete in three events. Mini trampoline, vault, and air floor.

“It is streaming,” she said. “They work on synchronization and technique, with one kid going and then immediately followed by another. It is like a flow as they compete on the floor. We have been doing this for about 10 years now. We just had nationals in Ohio, and they were national champions. They won.”

Smith said group gymnastics is a bit different, as it only has one national during the year, as opposed to other competitive sports which have several.

Smith said Gym Trix has a fit for everyone. Kids who just want to do drop ins, and kids that are there six days a week who are highly competitive and want to learn.

Smith said Gym Trix also offers recreational gymnastics for kids who want to learn, have fun, which is a low-key experience. It has drop-ins, with open gym every Friday night for ages 5 and up. For ages one to 5 it holds preschool gymnastics on Wednesdays from 10:30-11:15 a.m.

“You can come, book a gymnastics party,” she said. “Our instructors will do everything, clean up, so the kids can just come and have a good time. We book every weekend for those. We are packed.”

Smith said in addition, it has a sole contract with the city of La Mesa. Gym Trix goes to the La Mesa Community Center six days a week, set up and tear down for classes one year and older Monday through Saturday.

Smith said she is the sole owner of the business with about 25 employees.

“They are fabulous,” she said. “They love kids. Many of them are students and they come here several days a week.”

Smith said its next major event is Aug.13. It will be a large registration night at the gym from 6-8 p.m.

“We will have specials on classes, give away free t-shirts, promotional items, free cotton candy, and the kids can run around and play in our gym for free,” she said. “My staff will be here to meet and get to know them. And our current students can join and get some good deals on classes, and if they are brand new, they can check out our facility.”

Smith said Gym Trix also offers gymnastic camps, and this summer it has six weeks of gymnastic camps, four for older kids in Alpine, one preschool camp, and one in La Mesa, and all of them filled quickly. 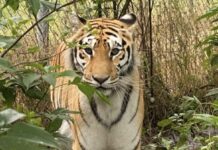