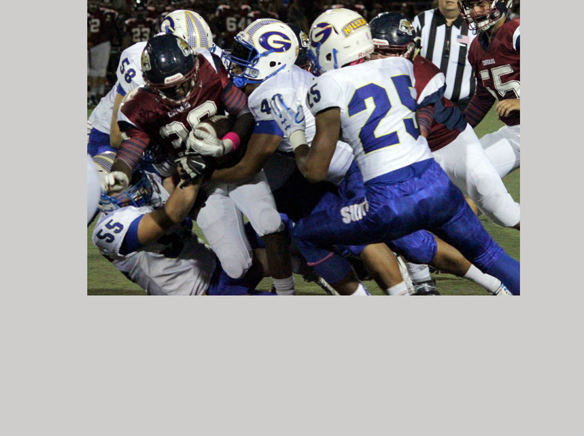 It has been 26 years since Grossmont High School’s football team has beaten Helix. This season’s Foothillers are ready to change that.

Warming up with a 41-0 win against Steele Canyon on Oct. 21, the Foothillers are undefeated and remain just a hair above Helix, last year’s Open Division champions, in the Grossmont Hills League.

It has been 26 years since Grossmont High School’s football team has beaten Helix. This season’s Foothillers are ready to change that.

Warming up with a 41-0 win against Steele Canyon on Oct. 21, the Foothillers are undefeated and remain just a hair above Helix, last year’s Open Division champions, in the Grossmont Hills League.

“Right now Helix is a hell of a team and a hell of a program,” said Grossmont head coach Tom Karlo. “It’s going to take a great effort by us. We’re going to go back to work and try to minimize the mistakes and play great football.”

Karlo said Grossmont’s win at Steele Canyon was still not up to the standard he expects from his team.

Perfection, said Karlo, will make all the difference against teams like Helix, who also had a shutout on Friday, beating West Hills 56-0.

“I’m proud of the score,” he said. “But we need to clean those things up as we move into playoffs and the end of the season.”

Grossmont has been executing an aggressive offensive strategy all season, said Highlander wide receiver Josh Moala, tiring out competition by maintaining a running tempo for the first several quarters.

“Originally, we came out with the game plan to not let them score and get them tired early,” he said of their game against the Cougars. “Our expectations were exactly how the game turned out, just shutting them out and getting the win.”

The Foothillers closed the first half with 21 points, which they brought up to 41 by the end of the third quarter. Currently missing a number of key players from their roster, the Cougars gave up considerable ground during the fourth quarter and the Foothillers let the clock run down in the final two minutes. It is Grossmont’s fourth straight running clock this season.

“We’re just playing at a very high level and a very fast pace,” said Karlo. “We run a lot of plays and the kids work really hard at it. Eventually we just wear teams down. By the fourth quarter I think a lot of teams are out of gas against us.”

Grossmont’s star wide receiver Domonique Guevara said they prepared against Steele the same way they will prepare against Helix.

“I won’t say that you ever expect a game like this, but we were preparing for a bigger game,” he said. “We treat every game like it’s the biggest game and we came out and proved it.”

Moala, who caught a 20-yard touchdown pass during Friday’s game, said the Foothillers’ goal is to go 10-0 for the season and beat Helix this Friday (Oct. 28).

If Grossmont is not able to snatch the win, Moala said, they would keep pushing for a strong season.

“We’re always taught never to go too high on a win or too low on a loss,” he said. “We have the motivation to win, to come out every week, no matter what happened the previous week.”