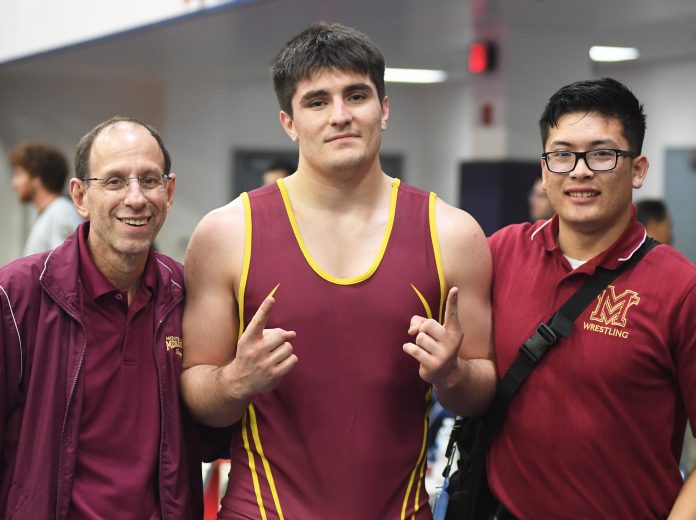 History — or, if you may, herstory — will be made this weekend in Bakersfield when the California wrestling championships take center stage at Rabobank Arena for three days, from Thursday, Feb. 21, through Saturday, Feb. 23.

Previously, the two-gender championship meets had been held at different venues and in different time frames.

East County can count itself as part of the history-making event.

Two female wrestlers and four male counterparts from the Grossmont Conference will represent their schools at this weekend’s mega-tournament.

The San Diego Section girls wrestling championships took place Feb. 1-2 at Brawley High School. The top three place-finishers in each of 14 weight classes qualified to compete at the state meet.

The section held its boys San Diego Masters state-qualifying tournament at San Marcos High School last weekend. The top four place-winners in each of 14 weight classes punched their ticket to the state tournament.

Gordon won the 235-pound heavyweight championship at the section finals while Dunbar finished second in her 116-pound weight class.

Gordon, the top-seeded wrestler in her division, recorded pins in all three of her matches to win the championship. She recorded pins of 42 and 46 seconds in her opening two matches and pinned Brawley’s Aislinn Hernandez, seeded third in the division, in 1:38 in the finals.

Dunbar was unable to notch a fourth consecutive pin but Bjork did in pinning Dunbar in 1:49 to win the weight class.

“The tournament grew again this year, registration was at 229, but only 211 made it to the tournament,” he said. “I expected a dip with the trip to the desert, but was pleasantly surprised. Brawley hosted an incredible event.

“With San Diego getting three state qualifiers this year, I believe we have enough talent to make some noise at the state level.”

Rancho Bernardo 143-pounder Annabelle He was the surprise of the tournament, according to Keifer. “She came in unseeded, beat the one and two seeds to win the tournament,” he said.

A total of 54 schools were entered in the team standings, with 51 schools scoring points.

Steele Canyon was the only East County school represented among the top 10 teams with 71 points in eighth place.

Mt. Miguel finished 19th with 40 points, followed by West Hills in a tie for 20th place with 35 points. Granite Hills finished in 23rd place with 33 points.

Stars in their eyes