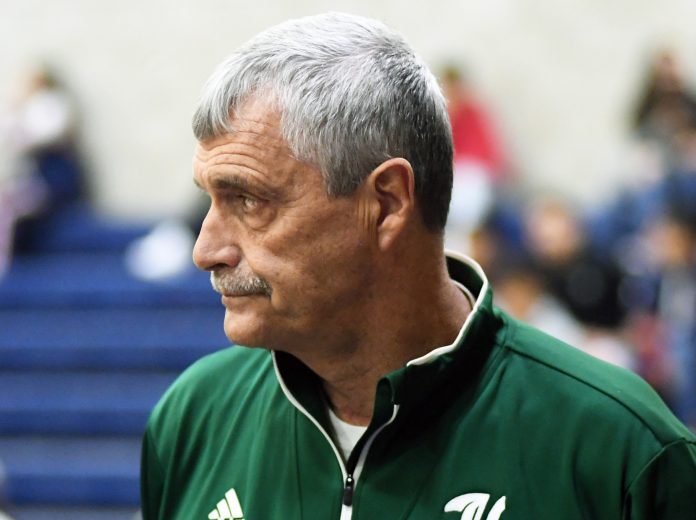 The Helix Charter boys basketball team did not advance to this week’s San Diego Section semifinal playoff round after ending its season in last Saturday’s Division I quarterfinals with an 82-57 loss to the second-seeded Montgomery Aztecs.

But the 10th-seeded Highlanders (17-12) did finish the season on an inspirational note.

The Scotties had dedicated the 2018-19 campaign to former co-coach Brennan Cassady, who had to step down this season after being diagnosed with a brain tumor. The team also had to persevere throughout the season while playing all its games on the road due to a remodel of the school’s gymnasium.

Veteran coach John Singer, himself battling cancer, returned from a leave of absence to coach the Highlanders for a 38th season.

Under his veteran guidance, he led the Highlanders to a runner-up finish to Mount Miguel in the Grossmont Hills League standings and a 61-55 upset win over seventh-seeded La Costa Canyon in the opening round of the Division I playoffs.

Helix warm-ups were emblazoned with the inspirational words “Cassady Strong.”

When sophomore Kai Jessie scored the opening bucket in last Saturday’s game and the visitors quickly proceeded to take a 13-9 lead, one had to wonder about the power of Helix’s postseason mission.

But the hosts quickly got their offense — and later, their defense — into gear and eventually turned that early four-point deficit into a 25-point victory.

The Aztecs (27-3) outscored the Highlanders 46-23 in the second half to advance to Tuesday’s semifinals against third-seeded Francis Parker (19-9).

“I’m happy with the season, with the 17 wins we had,” Singer explained. “In the playoff win over La Costa Canyon, we saw some things they didn’t do so well that we thought we could exploit. But we couldn’t do that against this team (Montgomery). They were tougher.”

Singer’s Helix teams have won four section titles during his long reign. He said he felt this year’s team grew through the adversity of the season.

“I thought they handled it well,” the veteran Helix coach said. “That’s part of the maturity that needs to keep coming.”

Businesses get a boost from county to ease economic hardship