The Granite Hills High girls varsity lacrosse team is poised for the now but also set for the future.

The Eagles were the highest-ranked East County team in the San Diego County girls lacrosse power rankings heading into Friday’s game against Westview.

The Eagles, who had a five-game winning streak heading into Monday’s non-conference game at home versus Serra, are off to a 6-1 start overall and are also 3-0 in the Grossmont League.

Head coach Jose Soto has guided the team to five league titles in the last six years. The Eagles went 17-2 last season overall and 8-0 in the league but were eliminated in the Division I quarterfinals.

The Eagles defeated Helix on March 19, 14-5, behind 11 goals combined by Ruffino and freshman Morgan Newkirk.

The young duo has combined for 54 of Granite Hills’ 97 goals.  But the Eagles have experience, too, with seniors making up the next three leading scorers on the team in Rebekah Hartnett, Caley Cash and Mikalee Drugg.

The key game in the league season so far was the Eagles’ 16-5 win over 12th-ranked Grossmont, as Ruffino scored nine times. The teams will meet again on April 5 at Grossmont.

After a season-opening loss, the Foothillers had won six-straight games heading into Tuesday’s home league game against Monte Vista.

Santana is off to a 2-1 league start, with wins over Valhalla and Monte Vista.

For the Lady Norsemen, the new program earned its first-ever win on March 6, defeating the Monarchs, 6-3.

Helix is in fourth place in the Grossmont League, but defeated Santana, 20-6, back on March 5 behind six goals from team-leading scorer Paige Scarbrough, a junior. 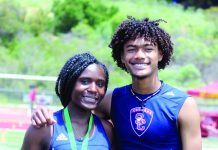